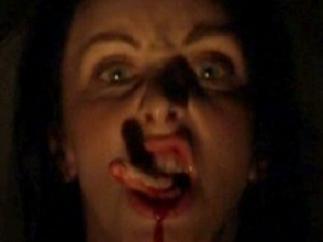 Ever had a unpleasant physical reaction to a really bad movie? I'm sure you have. Brian De Palma's "Mission to Mars", for example, gave me one of the worst cases of "restless leg syndrome" I've ever experienced, as did Roger Christian's abysmal "Battlefield Earth" and M. Night Shyamalan's R-rated coma "The Happening". Problem is, once I start fidgeting, there's a very strong possibility that I'm not going to stop until the offending picture has run its course. I strongly suspect that, in the not-too-distant future, one of these horribly slapdash productions is going to qualify me for an extended vacation to the local neighborhood nuthouse, a place where bad horror movies are strictly forbidden. The thought is oddly comforting.

Writer/director Pat Higgin's 2007 romantic horror excursion "Hellbride" definitely falls into this unfortunate category. It's a plodding, uneven mess, one that lends itself to boredom. As I waited patiently for something remotely interesting to occur, I felt my attention begin to wander, splintering off into directions that are generally not indicative of an engrossing cinematic encounter. When I wasn't pondering the decorative state of my spacious living quarters, I was formulating intricate recipes for pasta-based dishes that require culinary skills beyond my limited means. Had I not been charged with delivering this review, I probably never would have finished the damned thing.

The film starts interestingly enough: Eager to marry his beautiful girlfriend Nicole (Rebecca Herod), successful stand-up comedian Lee Parker (James Fisher) purchases a mysterious engagement ring from a local pawn shop. The jewelry in question, of course, is saddled with a horrible curse, one that violently threatens to completely derail the happy couple's marital plans and defecate all over their wedded bliss. As that special date draws near, the spirit of the ring's former owner and her faithful demonic sidekick begin to wreak havoc on everyone involved with the ceremony, culminating in an anti-climatic showdown between the living and the dead.

But wait, there’s more. To help the picture achieve feature-length status, Higgins has inserted an organized crime subplot involving Nicole, her devious father, and the son of crime boss into the mix. The daddy and daughter duo go to great lengths to hide the body, though it doesn’t lake long for the dead guy’s father to get wind of his child’s untimely demise. As with most mob-related yarns, the story ends with a sniper, a shoot-out, and a few bullet-riddled bodies. Why Higgins decided to toss this patchwork goofiness into his horror picture is perplexing, and reinforces my belief that the film’s Achilles’ heel is its inability to stay focused. The weirdly paced script, not to mention some truly poor effects work, don’t help matters, either. Все что вы хотели знать о Казино Вулкан Миллион, вы найдете по ссылке https://vulcanreg.com/million-kazino/ .

On a more positive note, “Hellbride” is peppered with some surprisingly strong performances, the most notable of which coming from leads Lee Parker (“The Zombie Diaries”) and Rebecca Herod (“Hush“). Sadly, their chemistry is somewhat lacking in terms of believability, but they both seem to be having a fair amount of fun with the material. However, the moments of clarity are few and far between, leaving the audience with more filler than actual content. Had the dialogue been sharper, this wouldn't have been an issue. Less is certainly more, especially when your characters have nothing of interest to discuss.

Even if you overlook the fact that "Hellbride" appears to have been lensed with an expensive camera phone over the course of a weekend, there's really not a whole lot going for the picture. The premise has promise, to be sure, but Higgins never seems to understand what, precisely, he wants to do with it. The final product is weirdly off-putting and remarkably dull despite the cast and crew's best efforts to deliver a witty, horror-tinged romantic comedy. A valiant effort that misses its ambitious mark by a mile.