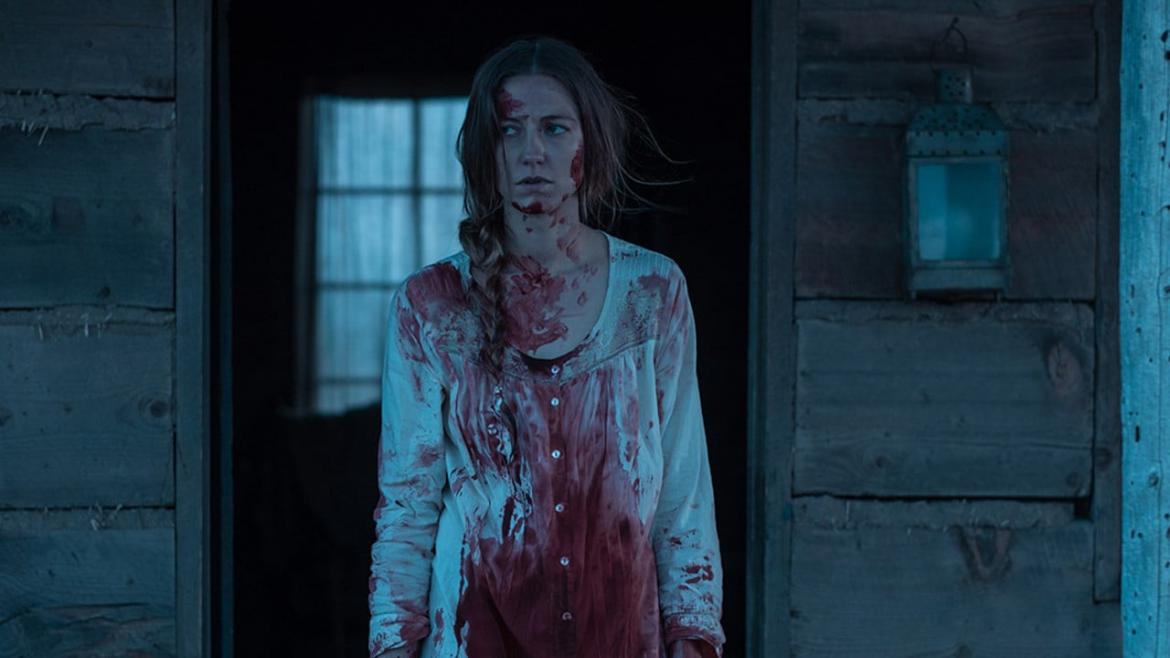 When I saw a screening of The Wind at a recent horror festival, it was introduced as a “supernatural Western.” I simply cannot think of a better way to describe it than that. Not only is that an incredibly apt tag, but damn does it grab one’s attention! I bet you’re dying to watch it right now just reading this, right?!

The Wind, written by Teresa Sutherland and directed by Emma Tammi, is a historical piece set during the Westward Expansion in the United States. The film opens on the aftermath of what has clearly been a harrowing night. In the early morning light, a young woman walks out of a small prairie home, covered in blood and clutching a small bundle of blankets to her chest. Two men are waiting outside and one approaches her to take what she is holding. The film’s first act keeps the audience at a distance as the narrative flows forward from that moment. The woman, Lizzy Macklin (Caitlin Gerard), is left home alone for a few days as her husband takes the other man back to town, and from here their world starts to unravel. Like peeling back the layers of an onion, the story moves back and forth between the past and the present, showing us bits and pieces of how things came to be the way they are. They may be the only people for miles but that doesn’t mean they’re alone.

During its 86 minute runtime, The Wind manages to weave a tense and troubling tale. The film simultaneously feels both expansive and claustrophobic. This is due in large part to its beautiful setting. The seemingly boundless plains roll away from the house in every direction for what looks like miles, but no matter which way you face, those plains sweep abruptly upwards where they meet the mountains. The effect is a landscape that gives the illusion of freedom and possibility, but ends up feeling more like a cage. The flat color palate only serves to enhance the experience. The screen is a wash of faded greens and browns, with the occasional burst of color.

The film has a very small cast (IMDB lists just seven actors), and the performances are strong, particularly those of Gerard and Julia Goldani Telles (who plays Emma Harper). So much of the movie revolves around these two women and their relationship with each other. The naturalistic performances embue their characters with depth and the tension between them is palpable. Drawn together by their circumstances, the women seem to care for and suspect each other in the same instant in a way that feels familiar but tragic to watch.

I know there are plenty of people out there who may see the word “supernatural” used to describe a movie and write it off without a second thought. And I get it! We have been so inundated with hauntings and conjurings and ghosties that it’s hard to not feel jaded. But if you’re one of those people, I would highly recommend you give The Wind a chance.