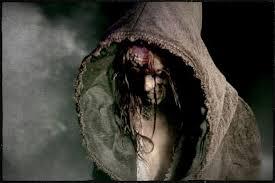 I watched 2013’s “The Wicked” a week ago and have been struggling with this review ever since. How to put in words just how bad this movie is? I mean, we’ve all seen bad movies, but even lowering my expectations to direct-to-video standards, “The Wicked” is a real bust.

Don’t believe me? Just try to sit through the first five minutes without a laugh. A little girl lies in bed, afraid that the town witch is going to get her. Her mother enters, tries to calm her down, then leaves and the girl gets sucked into some cheap special-effects vortex. The insipid dialogue will make you roll your eyes. And it’s only downhill from there, folks.

Fast forward a few days and people around this sleepy little Michigan town are all talking about the missing girl, but the police seem powerless to do anything. Turns out the witch the little girl was afraid of is part of town folklore. She lives in a rickety old house in the woods. Kids go and throw rocks at the house, and if one of them breaks a window the witch will come and get them. Four teenagers (including Justin Deeley who plays Zach) decide to head out into the woods for some rock-throwing and skinny-dipping. They’re tailed by Zach’s younger brother Max (played by Devon Werkheiser), who learned some witch-hunting tricks from his magician grandfather, and Max’s friend Sammy (played by Diane Hopper).

The teenagers eventually find their way to the old house and throw their rocks, a couple windows break, and out comes the witch. Along the way the teens sneak into the house itself and find the little girl, and then try to figure out how to escape. The whole idea of a witch coming after you for breaking one of her windows is a pretty weak urban legend to begin with, but one of the problems with “The Wicked” is it doesn’t even stay true to this logic. If the witch only went after those who broke her windows, why is she now chasing all the teens? I struggled to keep up with the plot holes and about an hour in just decided to let it go.

As I said, this movie offers little reason to watch. The dialogue and story are so bad I thought for a while this was actually some kind of parody of really bad PG-13 horror. This is especially true when the teens interact with two bumbling police officers straight out of the “Police Academy” movies. The death scenes and most scenes with the witch are so dark you can’t really tell what’s going on. The actors all try to their best given the material (I was particularly impressed with Hopper’s performance) but it’s just not enough.

I wanted to give “The Wicked” a little leeway given that it’s a low-budget horror movie (the gore scenes in particular look like something out of a teenage home-video project). But we have seen time and time again that low-budget is not a barrier to good horror. A low budget didn’t cause the awful dialogue and plot holes in “The Wicked.” It isn’t a movie made bad because of no money. It’s just a bad movie.