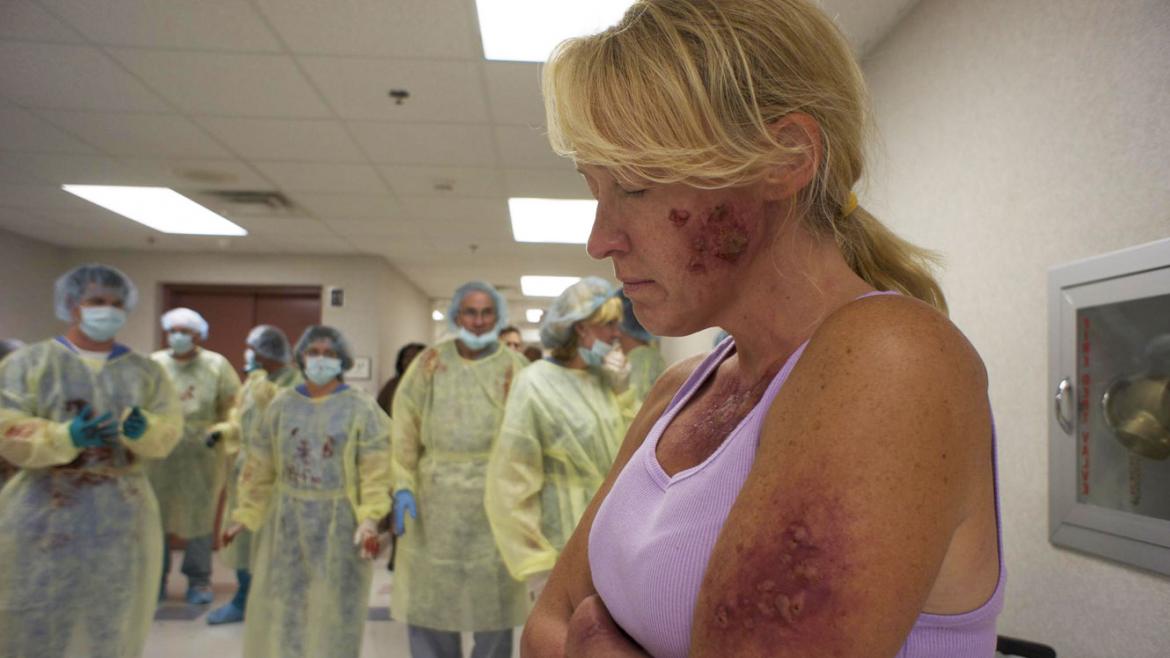 On paper, “The Bay” doesn’t look like much. It’s a found footage film, and haven’t we all seen enough of those to last a lifetime? It’s also directed by Barry Levinson, a fine director but known more for movies like “Good Morning Vietnam” and “Diner” than anything horror-related. How could this movie be good?

Well, prepare to be amazed, people! “The Bay” turns out to be one of the real surprises of the year. Levinson and screenwriter Michael Wallach weave a story about the dangers of environmental damage and some great gore scenes into a very entertaining film that will make you look twice at a glass of water before taking a drink.

The movie is a collection of amateur films — homemade videos, video chats, security camera footage—all filmed on July 4, 2009 in the fictional town of Claridge, Maryland. The videos have been suppressed by the government but now are being released by Donna Thompson (played by Kether Donohue), a journalist who was in the town that day. We see 2009 Donna in several of the clips (going from interviewing beauty queens to finding dead bodies) while 2012 Donna provides background narration to all the snippets of film.

The videos start with typical Fourth of July images—parades and eating contests. As the title would suggest, however, there is something in the nearby bay. People develop blisters and then things hatch inside them and begin eating their way out (reminiscent of the classic “They’re Creeping Up On You” short from “Creepshow”). Before long, the local hospital begins to fill up, and calls to the CDC result in only frustration.

In lesser hands, this could be another found footage snoozer, but Levinson knows how to tell a story and he does a great job ratcheting up the tension. Unlike other pandemic films that spend time analyzing the illness and searching for a cure (“Contagion” comes to mind), “The Bay” offers no hope to those being filmed. They don’t know what’s happening and they are helpless to stop it. That chaos drives much of the film’s horror. Among the film’s best scenes are of a young couple (the woman played by Kristen Connolly from “Cabin in the Woods”) and their baby boating to Claridge to celebrate the July Fourth festivities, unaware of what's waiting for them. Every time the film shows them smiling in the sunshine as they get closer to the town you just know something bad is going to happen.

I won’t say “The Bay” is without its faults. The film doesn’t spend a lot of time developing characters, and many of them are typical small town stereotypes. There are the two cops who stumble on something they weren’t expecting, the mayor telling people to just trust the water in the bay, and the small town doctor who doesn’t understand why the authorities can’t help. In addition, some of the plot points seem odd. The FBI could close the bridges leading to the town and cell towers, but it’s not until almost the end of the film that the White House is called? But these are minor points over all, and don’t bring down the movie’s enjoyment level.

As I said, Levinson and Wallach have a message here, one about the dangers of pollution. The film suggests that the horrors are caused by radiation and sewage leaking into the bay waters. “The Bay” is careful not to let this message take over the movie, however. If you want to look for a deeper meaning in this film, go for it. Or you could just sit back and enjoy the scares. Either way, I dare you to jump in the pool after it’s over.