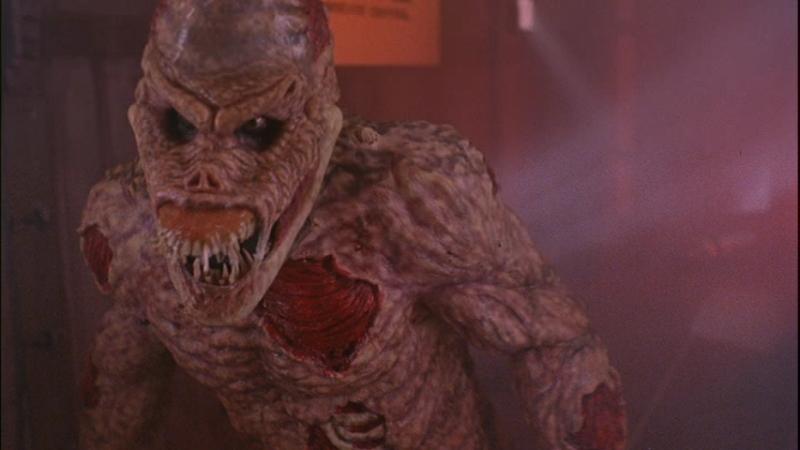 The Terror Within (Movie Review)

If imitation is the most sincere form of flattery, then "The Terror Within" should go ahead and propose marriage to Ridley Scott's classic "Alien". After a very brief spell of originality, "The Terror Within" seamlessly devolves into a direct lift of the best bits in "Alien" including a chest burster scene, ventilation shaft hijinks, and disposing of the monster through air related means.

The premise alone harkens back to the xenomorph's first appearance so much it actually passes for quality during its first act. In this universe civilized society has ceased to exist , and the world has been altered to a wasteland by "the accident," a chemical warfare experiment gone irreversibly wrong. The few survivors left get by through hiding in a facility underground that will remind any gamer of the "Fallout" series' vaults. Though shielded from the outside world and whatever plague exists within it, mutated creatures referred to as 'gargoyles' roam above in search of human women.

Honestly the fact that the film is a derivation of "Alien" doesn't hinder enjoyment. The characters motivations are all clear and relationships well defined thanks to being lifts from its predecessor. The set pieces are well staged and the action sequences do contain a strong sense of suspense, because "Alien" gave them a blueprint. And the set itself contains a lot of character and intrigue having been shot in the mojave desert, and then relocating to the familiar underground dwelling substituting for the Nostromo.

So what's the main issue if all this is a relatively fun dollar store version of Scott's film? The creature. Obviously the biggest reason "Alien" succeeds is that when it's finally time to come face to face with the xenomorph, it is so viscerally intimidating and terrifying. The design was unique, innovative and blew audiences away with originality. In "The Terror Within" the monster appears to be a cross bred genetic monster of a Human-Duck-Pig-Lizard nature (dangerously close to ManBearPig territory from South Park). It's so goofy it eliminates all actual dread from the film and immediately dives into a campy rape fest. If viewed with this connotation ahead of time this could be a much more fun watch. Unknowing though, it was a disappointment.

The disappointment is particularly strong when the film tackles the topic of abortion in a loose, quick and haphazard manner. Two characters have been in a monogamous secret relationship for about 3 months and find out the woman is pregnant after the beast has attacked. Setting up an interesting dichotomy of whether or not the child is a product of the beast or the man. This isn't let any time to breathe however and it's thrown away almost immediately after the plot line has been established.

"The Terror Within" is a cheaper, raunchier, subtext lacking "Alien" ripoff, but that doesn't mean its terrible either. The film is full of schlock and 80s charm that carries it into a campy cult territory. Not quintessential viewing, but not a complete waste either. "The Terror WIthin" makes for a solid midnight movie or watch with friends, knowing exactly what you're getting into.