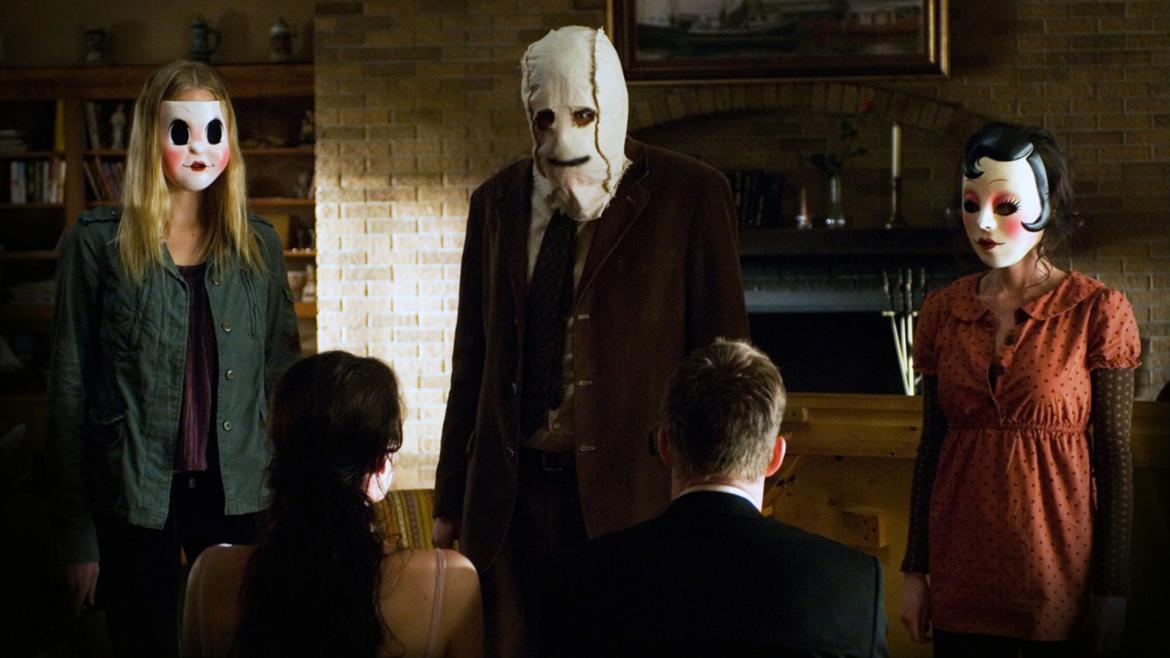 Bryan Bertino made several powerful and effective decisions in crafting his debut feature, "The Strangers," but one in particular set a unique and rewarding course. At the film's outset, voiceover and on-screen explanation informs us that the story that follows is based on actual events. We're also told that the FBI estimates that there are roughly 1.4 million violent crimes each year in the United States. It's what comes right after this information though, that preps us for the harrowing journey that Bertino has laid out.

After we hear the turnover of a car engine, Bertino doesn't cut to action. Instead, several images flash across the screen, as if seen from a passing car window. Each image is of a run-of-the-mill suburban home, not unlike those you might find peppered across a majority of the developed world. The implication is clear, we're not deep in some secluded, red-neck infested woods, nor are we journeying into a lawless and violent city. With only a few flashes of scenery, Bertino illustrates that we're in Everytown, a place we've all lived or at least visited. This efficient detail, one of many that Bertino took his time to get right, speaks volumes not only about what "The Strangers" is, but also about what the film isn't.

If you've seen the trailer, you know the whole story: a young couple (James and Kristen, played by Scott Speedman and Liv Tyler) plan to crash at a vacation home after a wedding. Their emotional evening is interrupted, at first harmlessly, but then very harm-fully, by a trio of masked assailants. Bertino, who also scripted "The Strangers," adds no filler, no subplot, and no fooling around. After a scant fifteen minutes of build-up, "The Strangers" becomes an edge-of-your-seat ride that does not let up until the credits roll.

Interestingly, Bertino shows his hand from the outset by giving us a view of the violence's aftermath, in essence saying, "Here's where I'm going. I hope you're ready." With the outcome revealed, one might think that the anxiety we feel for the two main characters would dissipate. However, Bertino, along with accomplished cinematographer Peter Sova, wields the camera so as to continually keep the audience off-guard. Like James and Kristen, we are confined largely to the suburban house, a place that feels like "home." The color palette deployed throughout acts to soothe, so that when the assault begins with only a knock on the door, our calm is shattered along with Kristen and James's. Using sound, as in the skipping record player or the loud bangs from outside, along with visual cues, the director ensures that we never settle once the assault has begun.

It's clear from the opening that "The Strangers" was crafted by an artist who understands the mechanics of horror, but it was the decision to highlight the mundaneness of the actions on the screen—the banality of perpetrators—that truly makes the film horrifying. The violence here never veers into the extreme or graphic; there is little to satisfy the gore-hounds. These three unnamed attackers seemingly materialize out of the scenery, commit their depraved acts, and then, as we see toward the film's conclusion, simply fade back into the flow of suburban life. In scope, the film feels almost small enough to shrug off, if only the actions we've just witnessed hadn't been so callous and vile. Of course, this plays into Bertino's conceit: these murders were not extraordinary. Sure the killers wore some creepy masks, but otherwise, you can find this stuff (or often much worse) in your newspaper. When the stories are described in black and white on the page, we can shrug them off. Here, unfolded with precision and care, the events are laid out so that we can't possibly forget.

Though it's quite strong for its brisk duration, the film is not perfect. It is slight, and features perhaps one jump-scare too many. But so many of the pieces are in place here that even the most hard boiled horror fans will have trouble finding much with which to quibble. "The Strangers" shares a common heritage with many of this decade's strongest horror offerings. Like Rob Zombie or Alexander Aja, Bertino owes a dept to the masters of the 70's and early 80's. By stripping the concept of a home under siege down to its most basic form though, "The Strangers" avoids the excesses and needless references that have dragged down other films. It's also clear that the director is capable of more than just aping his predecessors; he is comfortable enough with the syntax and semantics of fear to craft an enjoyable and terrifying film that is all his own.