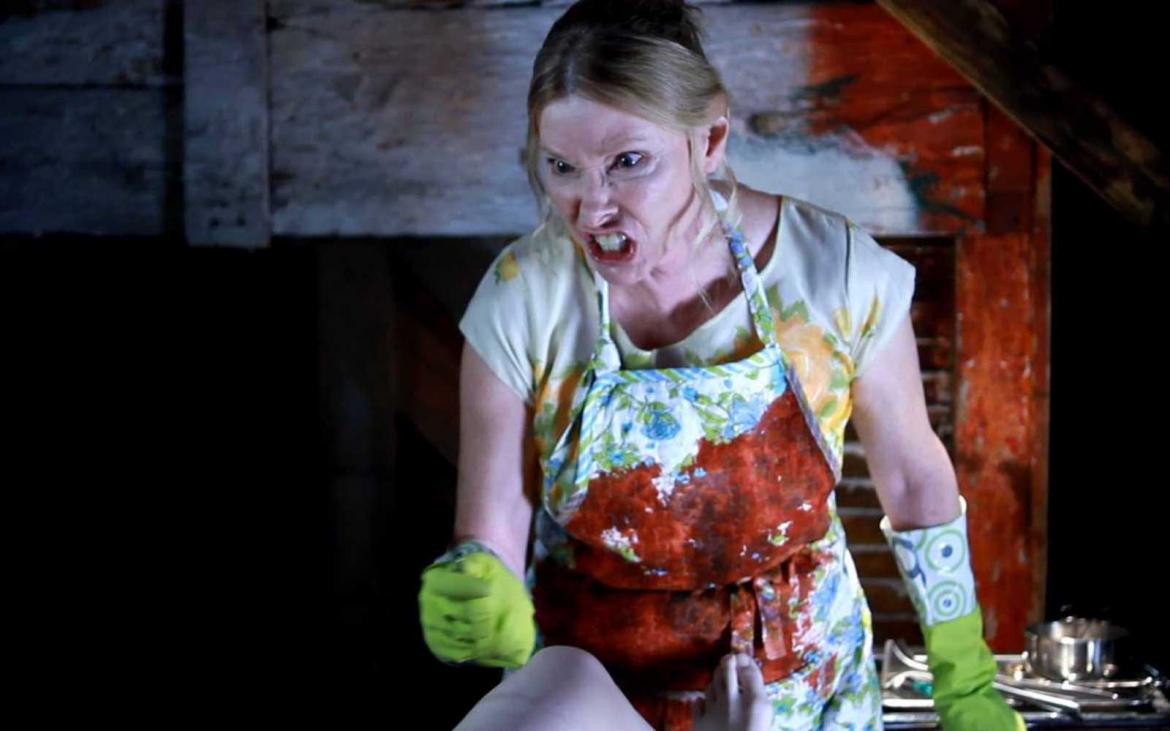 Debbie Rochon, a prolific scream queen of 200+ ultra low budget indie horror flicks makes her directorial debut with a film that captures the spirit of her lengthy career. Model Hunger is that film and without breathing a word of the premise I'm sure the mind can conjure up at least a snippet of what we are dealing with.

You take an aging former model, Ginny (Lynn Lowry), who's modeling career was cut short when the industry began transitioning to more aesthetically pleasing female forms (aka paper thin) and add in a dash of crazy and boom, you've got yourself an indie horror concept. Rochon though doesn't just add a dash of crazy, she dumps the entire container on her directing debut in the form of Ginny, played to great effect by Lowry. Ginny is unhinged, but she's complex all the same. A frail old lady on the outside with the mind and capability of a cannibalistic serial killer. It's her duality that carries what otherwise is an easy film to write off.

Outside of Lowry, Rochon calls on the duties of an additional indie scream queen- Tiffany Shepis- with similar career path as her own to come along for ride. Shepis plays Ginny's new nosy neighbor with a schlubby hubby who becomes suspicious of Ginny's extracurricular activities. Plot wise these aspects are stretched pretty thin as Ginny begins to pile up bodies and spouts off rage fill and mostly thought provoking dialogue that often tilts heavy on the anti-men scale. It is the writing for her character that makes Model Hunger what it is, which has quite a bit to say about women's self image and worth.

On the negative side Model Hunger has all the production value of a snuff film- which is kind of masquerades around as at times. There is only so much enjoyment that can be squeezed from Lowry chewing scenery as a sexless old lady one second and surprisingly sexy temptress the next, that the lack of any really solid gore effects becomes a drag. Additionally Shepis rarely feels like she's consequential to the plot until the final minutes of the film leaving her feeling mostly wasted. Shaky cam and slips in realism are the two major offenders as Rochon relies a little too often on hand held camera movements in unnecessary situations- particularly in the early scenes. Tension and realism are lost later on when, in moments of violence, characters pull back a bit (or are clearly using soft props) which severely lessens the impact cinematically.

Model Hunger often looks and feels like a buddy showing you a movie they shot on their camcorder one weekend over the summer. However, to write it off as such would negate the fact that Rochon, for a first timer without access to an inflated budget and in-routes to more upscale effects departments, still managed to pull off a watchable genre flick. It's a film that wears its limitations on its sleeve and there is something to admire in that- especially with the proper expectations.