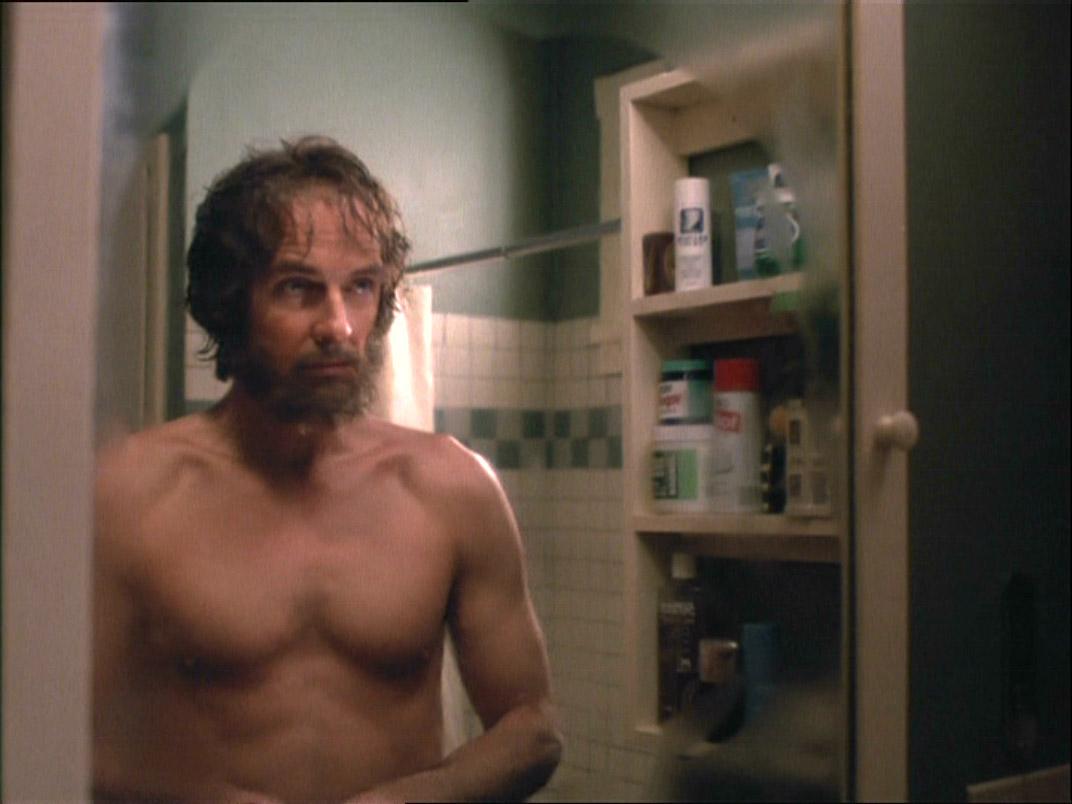 I'm sure that if you watch TV or have been to the movie theater in the last month, you're well aware of an upcoming remake due for release. With all the hubub about the new version as well as sequels to the original film being re-released on DVD, I felt it necessary to go back and revisit the original "Stepfather" for a refresher. While the original film has its share of merits and demerits, it is a film that ultimately fails to leave a mark on your memory, leaving just a vague trace of times gone by.

If you don't know the story by now, it's simple: sociopath Jerry Blake has a dream of having the perfect family. A doting wife, a respectful child, and love and devotion thick in the air. An admirable dream to have for sure, however, Jerry has some problems. When his perfect nuclear family starts to show its faults, he can see nothing but rage at his dreams falling to pieces. When faced with failure, he only knows one way to retaliate; death and blood. Not to worry though, because just as his perfect life begins to come unhinged, he begins the process of setting up his next identity and family.

Made in 1987, "The Stepfather" is a unique film as it borrows many aspects from other slasher films of the time and pairs them with a thriller backdrop and a hint of after school special (lesson: dig deep when you plan to remarry!). The film opens with some great shots of the aftermath of Jerry Blake's rage and illustrates up front exactly what he is capable of. We then take a sharp detour into the after school special phase as we watch Jerry assume his new identity and make amends with a wary stepdaughter. While these scenes are integral to the setup of the movie, they do feel lacking when compared to the brutality of the film's opening.

As the action rolls along, it continues with this light morality tale of trusting strangers and the like. Thankfully, with the acting skills of Terry O'Quinn playing Jerry Blake, the movie manages to maintain a captivating quality to it that sucks you in. Sure, this madman character is not over the top, scary at first-sight or anything of that sort. He works masterfully though, at swinging back and forth from loving father who wants the best for his new little family and unsettling lunatic, bursting with rage. When we first see this dark side, it comes in the middle of a family picnic scene where Blake has hobnobbed gleefully with his friends and neighbors. As he hears news of his past crimes by word of mouth, he slowly begins to unsettle. Later, he runs to the basement to unleash the beast inside him, not knowing he's being watched by stepdaughter Stephanie. These scenes, sprinkled throughout the film, show O'Quinn's range and help to pull us into this crazy little world of psychosis.

The plot of "The Stepfather" is rather basic, but it works. There are some holes and faults throughout, but the movie ventures down a road that brings humanity to a horror film, thus making it all the more chilling. The simple 'this could happen to you' vibe adds an extra layer of anxiety here. No supernatural masked men haunting your dreams or stalking you through the woods. Instead, it's Mr. Average, the old fashioned serial killer that looks like everybody else.

The cast at work here goes a long way to make this enjoyable. I've already sung the praises of Terry O'Quinn. If you're not familiar with his name, I'd guess that you aren't familiar with his character John Locke on ABC's "Lost." While both Locke and Blake are a bit nuts, going back to watch "The Stepfather" will go a long way to showing the range that the O'Quinn can bring to a part. Joining him is 80's B-Movie stalwart Jill Schoelen who you may have seen in other cult classics such as "Popcorn" or "Chiller." She knows her way around a horror movie and fits in well here. She's as sweet and innocent as we've seen her in the past, and she plays nicely opposite the manic O'Quinn. Играть онлайн в казино мистер бит на официальном сайте.

While the original "Stepfather" may not have done much to cement itself as a film to remember back in 1987, it has actually aged rather well and still remains an entertaining watch twenty two years later. To be honest, the big question these days is if the movie actually needs a remake. On this account I say no, it doesn't. "Stepfather" is still pretty effective as is. When the movie still works twenty years later, why bother?

If you're a fan of 80's horror and want a movie that is just a bit outside the curve, give "The Stepfather" a watch. You'll be surprised how much you enjoy it.