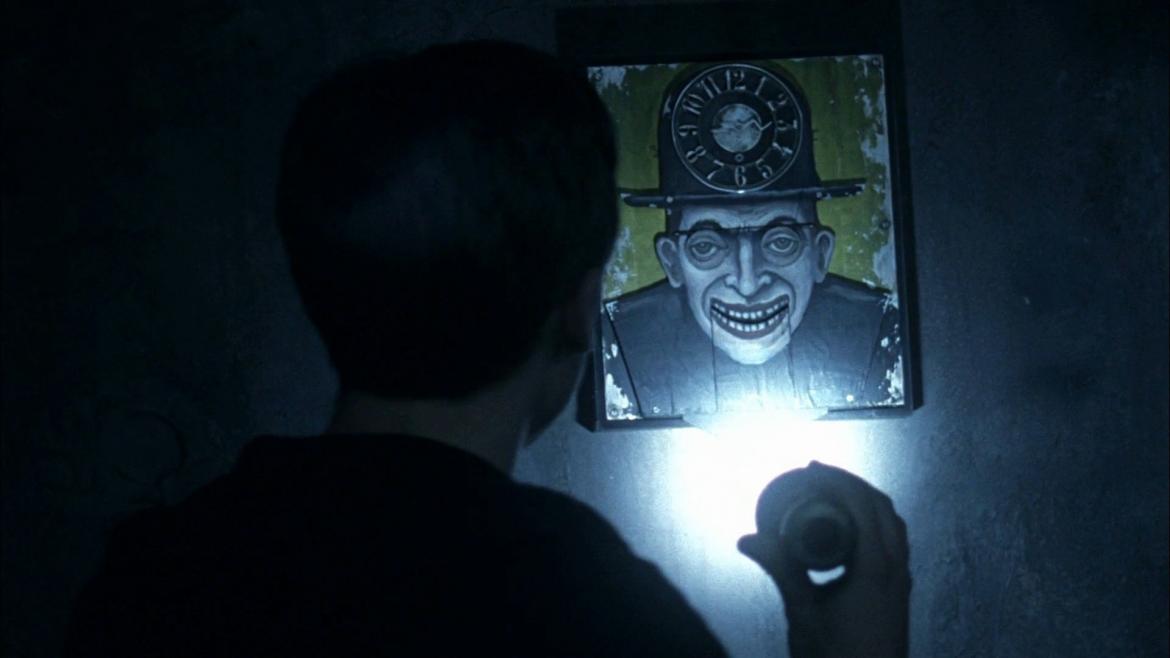 For every mainstream disappointment like "My Soul To Take," there are dozens if not hundreds of straight-to-DVD horror releases waiting to be stamped "the next cult classic." Genre fans that are malcontented with the rehashes they are forced to endure will often take up the cause to shoehorn a video release into 'cult' status, ignoring its major shortcomings simply because its original. Such is the case with "Parasomnia," a film by William Malone ("Featdotcom," "House on Haunted Hill") that is greatly flawed, but manages to be visually arresting enough that some fans may be inclined to give it a pass.

No one can argue that "Parasomnia" is a surreal effort. There is an innate dreamlike quality to the film making and storytelling, and the experience in general is quite disorienting. Although theres quite a bit of abstraction here, there is meant to be a central story that drives the plot, and it's a shame, because that's where this whole thing starts to unravel quite quickly.

After a brief and stark suicide scene that is sort of explained later in the film, we meet our main protagonist Danny, an art student who's live-in girlfriend recently left him without notice. Struggling to make sense of it all, he visits a friend in rehab, and in doing so discovers two diametrically opposite characters in adjacent rooms in the hospital. The first is Byron Volpe, a former hypnotist and convicted killer who forces other people to commit heinous acts for him. Volpe is hooded and bound to the walls in crude fashion, in a room that inexplicably looks more like a prison cell than a hospital room. Although this character is the most interesting in the film and the main antagonist, he's absent from a majority of the experience.

After making brief eye contact with Volpe, Danny moves on to the next room where he sees Laura (Cherilyn Wilson), a fair and beautiful young woman who due to a sleeping disorder has been asleep for nearly her entire life, who only wakes up briefly to form crude sentences or smile coyly upon discovering that she's half naked being sponge bathed in a dirty attic apartment by a man that kidnapped her. Not only did I not make the latter half of that up, the kidnapper in question is in fact Danny, the character that we as a viewer are supposed to identify with and lend our support to. In story, this is lauded as an act of heroism because he's technically "saving" her from the nefariously named Dr. Byle, who we're told is going to perform terrible experiments on her, or something. In reality, this sequence of events looks a lot like a kidnapping and borderline rape scenario where a boy falls in love with a sleeping girl because she's pretty, sneaks her out of a hospital, undresses her, and soaps up her breasts as a way of saying "welcome to my apartment!"

It's at this point that "Parasomnia" really begins to stumble. As it turns out, Volpe has a psychological link with Laura, and is extremely distraught when she is taken from the hospital. In order to get her back, Volpe haunts her dreams and forces her to kill numerous people in and around Danny's apartment. Meanwhile, two detectives (one of which is played by a haggard looking Jeffery Combs) pin the crime on Danny and attempt to track him down. What unfolds is a very disorienting mix up of scenes that include poorly rendered but appropriately surreal dream sequences, a handful of "whoops she's randomly falls asleep" comedy sequences, some surprisingly gory kill scenes, and yet another sponge bathing scene (this time with a cheerleading uniform!).

Underneath the "horror stuff" is a Romeo and Juliet-esque love story where Danny, the martyr, professes his love for that sleepy girl whose tits he soaped twice, and vows to stay by her side even after the bodies start piling up. I'm sure that this story arc was meant to be disturbing, and it is, but it's also played up to be classically romantic, which doesn't sit very well considering how delinquent the whole thing is. xgeneve.ch There is an attempt to add additional weight to the romance by offering a flashback where the two meet as kids, but it's not at all convincing. The weirdness would be entirely forgivable if it wasn't meant to be the entire focus of the film, but instead its this particular off-putting aspect that drags "Parasomnia" down into the dregs, at the expense of its lasting visuals and intriguing antagonist.

Though all hope seemed to be lost at a point, most of the last half an hour of the film is quite visually and thematically intriguing. The climactic confrontation between Danny and Volpe that takes place among a menagerie of twisted mechanical puppets backed by classical music is a major highlight of the film, as it should be. Because most of "Parasomnia" is bleak and gray (with constant computer-generated cloud cover to hammer the point home) this portion stands out and feels very strong and well thought out. It's almost as if Malone worked backwards from this idea, and lost a little bit of life and cohesion with each subsequent scene. It's a shame, because the character of Byron Volpe was so well written and well acted that it deserved to be in the forefront of the film.

For all of its visual strengths "Parasomnia" ultimately fails because of the shoehorned romantic subtext. Bully to Cherilyn Wilson for being so willing to have her ta-tas cleansed twice on screen in her first feature film role, but there's nothing about the love story that improves or sustains this film in any measurable way. What could have been a visually strong and disturbing story about a mad genius was instead a jumbled pile of throwaway kills underlined by an unintentionally creepy love story. "Parasomnia" may find a home with horror fans with working remotes that can fast forward through the nonsense, slow it down for the soaping scenes, and skip to the end for the real worthwhile stuff. Otherwise, I just don't see much to hold on to here.