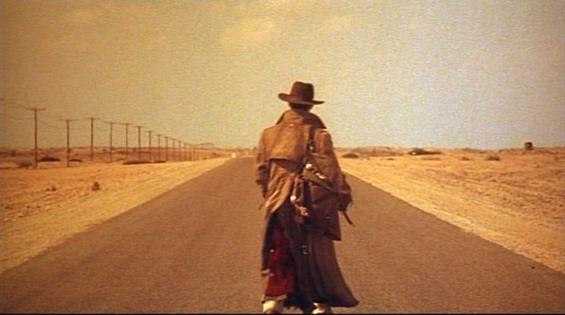 Richard Stanley’s 1992 film “Dust Devil” is another in a long line of films that fell into obscurity due to studio tampering and then resurfaced thanks to the spread of video technologies. While at first cut down to almost 40% of its original running time, Stanley reassembled what some call a “compromised” cut of the film that went out on a short run in theaters. The film then became available on DVD in a “Final Cut” version restoring much of the truncated plot points. Admittedly I have not seen the other iterations of the film though I usually see comparing multiple post-theatrical cuts of films as fruitful as comparing apples and oranges (heh). However Stanley’s “final” version of “Dust Devil” is a fascinating film about the transitory definitions of horror and otherness. Though the film has its shortcomings it nevertheless represents a unique take on the effects of dissolving national boundaries, race relations, and the slow decline of European colonial practices in south African countries.

As the film opens we watch as an unnamed nomad (Robert Burke) wanders through a sickly red and orange Namibia desert. Through an undisclosed narrator we learn that this man is in fact a shape-shifting demon personified as a man whom must break free of the material world by killing and mutilating the bodies of the “lost, forsaken or damned” who we are told are attracted to him. Simultaneously a young woman named Wendy (Chelsea Field) sets out to break free from the possessive grasp of her abusive husband Mark (Rufus Swart). As Wendy sets out to reach “the sea” she crosses paths with the “Dust Devil” whom she names Texas for his American accent. Meanwhile, a white police captain (William Hootkins) and a black police officer named Ben (John Matshikiza) are investigating a long string of grisly murders culminating in ritualized use of body parts, sexual mutilation, and the amputation of the victims fingers. Left to carryout the investigation alone in the decaying town of Bethany, Ben must consult with a local shaman turned bum (who is either incredibly high or keenly perceptive) in order to track down the murderer.

While the film’s primary narrative thread is Wendy’s struggle, “Dust Devil” is much more compelling as a film which explores the relationships of the individual to the land and the influence of race in constructing a national identity in a post colonial world. As the paths of these characters begin to converge, the filmmakers utilize a number of tense editing and cinematography techniques that enhance the film’s surrealist and existential qualities. The characters are stripped down of their possessions and meant to encounter their challenges alone, wandering in spaces that could be real or imagined. The ability of the land to render the individual bare is also extended to the wider social world. The desert setting is at once void of national orientations yet full of history and the memories of conflict. When on the hunt for the perpetrator, Ben declares that there are no more borders, no more countries, just the hunting ground. Throughout the film characters continually allude to the relationships of Namibia to South Africa and their histories of cross-border conflict in particular the South Africa Border War of the mid-1960s. The film is also rife with the racial tension between the white military and police officers and the black populations who have endured centuries of violence. Through the combination of these allusions and the ways in which the film constructs the antagonist, it becomes possible to read the film as an examination of the deep trauma left behind by the impact of white violence and colonization. It is no coincidence that the “Dust Devil” is a steely white man who wreaks havoc on the Namibia landscape.

However, the film’s hallucinatory style and prophetic look at the influence of colonial history and race in informing otherness doesn’t quite transcend the film’s weaker attributes. In particular a number of the performances fall fairly flat throughout. There are more than a couple moments in which the characters seem to have the screen presence of a jellyfish or they simple look all too seriously bored. Stanley’s presence as a director certainly manifests itself in the film’s post-production but there is a lack of energy and immediacy in a number of the scenes. It seems as though most everyone is playing a stark, hollow version of a character. The addition of the previously mentioned voice over also makes for a number of half-baked attempts at mythologizing the “dust devil” demon. It’s a prime example of trying to creep out an audience by throwing more mystic details in a string of awkward non sequitur adjectives and poorly constructed histories. Some of the more ostentatious camera techniques come off as cheap and distracting. For every inventive use of helicopter shots we also see dimly lit or awkwardly framed moments in which characters in long shot are clearly fumbling to keep from catching each other. A number of the more “typical” narrative threads (i.e. Wendy and Mark’s relationship) seem as though they were give little attention in favor of getting to the more interesting racial tension.

It’s hard to tell at what point Stanley ends and the studio begins so it is difficult to say where the missteps happened. But despite these flaws, the film’s main conceit maintains a provocative weight that makes “Dust Devil” one of the more thought provoking explorations of the complicated relationship of race, otherness, and horror in a given context. It is a film that has some lofty ambitions that it fulfills for the most part while also failing to follow through on some of its more traditional beats. (I also have to admit this movie has one of the best exploding head moments I’ve seen.)