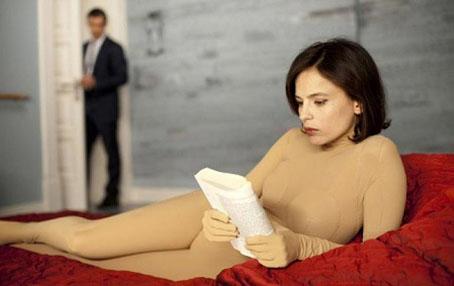 It was only a matter of time before Pedro Almodóvar made a horror film. His decades long career directing, writing, and producing exhibits a constant concern for themes that flirt with the horror film genre. His films revel in all things melodramatic, the fluidity and ambiguity of sexual and gender identity, a love for surfaces and pop culture, camp, and the perils of isolation. A few of his films, namely “Carne Trémula” and “Atame!”, more precisely lean toward the horrific. Like the horror genre itself, we see throughout his films an interest in the boundaries of provocation that motivate physical bodies to react, emote, and change. Where in horror cinema we are more likely to witness the quite literal transformation of bodies and their subsequent expulsion, Almodóvar’s characters desire a transformation that will reveal a more realized notion of self.

However, in Almodóvar’s most recent film “The Skin I Live In” (“La Piel Que Habito”) this act of transformation becomes something far more sinister and invasive. The film displays many of the aforementioned hallmarks but with a uniquely distinct edge to it that sets it apart from the director’s other works. While the film is definitively a work of Almodovar’s imagination it maintains an extra layer of viciousness that seems to be carried over from its generic influences; both a blessing and a curse in this instance. Indeed, the film is an engaging, narrative twisty piece of cinema that at times left me aghast, breathless, and empathetic.

Set in an isolated manor in the Toledo countryside, the film centers on Robert Ledgard (Antonio Banderas), a renowned plastic surgeon known throughout the medical community for being equally brilliant and overly ambitious. Robert, inspired by a tragic car accident that left his wife horribly scarred and eventually lead to her suicide, has been in the process of developing a new synthetic skin. The skin is resistant to intense heat, exhibits unusual toughness, and repeals insects. However, as the film unfolds we witness a peculiar domestic ritual as Robert’s maid Marilla (Marisa Paredes) prepares breakfast for a woman named Vera (Elena Anaya) who we see performing yoga in a bodystocking. Marilla spikes Vera’s orange juice with some drug before delivering it via a dumbwaiter all the while the two communicate over an intercom. It becomes apparent that Vera is incarcerated in her room and kept under surveillance, a human subject upon which Robert is capable of experimenting. After an unexpected visitor violently interrupts life at the manor, Robert and Vera express their desire for one another and reveal more about their passed histories.

It is difficult to go into much detail regarding the film’s narrative as the structure conceals some vital plot information for nearly the entire first half of the film. While at first this structure feels like a manipulative bait-and-switch it is also a clever technique for drawing correlations between Robert’s actions and motivations with the more overtly violent, sociopathic behavior that surrounds him. Much of the discussion below will reference this “twist” so if you haven’t seen “The Skin I Live In” skip to the last paragraph.

It is revealed that Vera is actually Vincente, a young man who had raped Robert’s daughter provoking a psychological break and eventually resulting in her suicide. Vincente has been held captive by Robert for six years all the while being experimented on and transformed into a woman who facially resembles Robert’s late wife. Throughout this time Vera is given books and television from which she is capable of deriving some solace. She makes small sculptures of human busts made from scraps of dresses and practices yoga all the while recording dates of her incarceration on a wall, peppering it with axioms such as “art keeps you free.” Simultaneously, we watch as Robert stares at Vera through a wall sized television monitor, her face and body-sock covered form blown up to ridiculous, all encompassing proportions that dwarf Robert. Throughout the film a number of close-up shots are held on Vera’s body and a mannequin form from which Robert uses to shape skin grafts and musculature. Vera’s body and the mannequin at times seem indistinguishable from one another, each being but a piece of material made by a human and never truly existing.

The mirroring of Vera’s art with that of Robert’s desire for invincibility and physical aesthetic beauty is where Almodóvar finds his most rich and satisfying narrative beats. Each of these characters work to create spaces for themselves in which they have protection and reassurance. But in Robert’s process we are given an outwardly aesthetic piece of perfection that swallows Vincente as a person. And while Vincente’s abduction and torture speaks to the depth of Robert’s vendetta, it is also a statement on the perils of attempting to prescribe a sexual identity or gender role unto a person. It is an act equated with other means of violence throughout the film as it forces Vincente into becoming a monster of perfection.

The film is punishing at times with its seemingly endless string of cold, unscrupulous and vicious decisions made by its characters. And at times Almodóvar is a touch overzealous when laying out the motivating forces behind Robert’s decisions including one scene in which his mother claims to breed insanity. (But what would an Almodóvar film be without some soap opera tier trauma?) When the film concludes with Vera’s final admission, it is difficult to quite get a handle on where exactly Almodóvar saw this character heading in the first place. However, “The Skin I Live In” still maintains a distinctly clever and pointed personality that adeptly explores complex issues of violence, aesthetic beauty, and vengeance.

Lastly, Almodóvar does not see the film as a horror picture and insists it “doesn’t belong to the horror genre.” Though I don’t usually ascribe to director’s comments on their intention, I do find his comments on reactions to the film particularly enlightening. Almodóvar’s comments can be located in the “Blog” section of the film’s official website.

Movies Like The Skin I Live In (La Piel Que Habito)