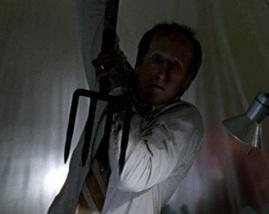 In 1973 George Romero released "The Crazies," his second horror feature and his follow-up to the monster success of "Night of the Living Dead." Today, this sophomore effort has its defenders, but feels stilted and messy. Given its flaws and the poor way it has aged, "The Crazies" is perhaps one of the best examples of a horror feature ripe for a re-imagining. Breck Eisner has provided that with his new remake. By toning down the over-bearing big-government paranoia that defined Romero's film and instead leaning heavy on meat-and-potatoes horror filmmaking, Eisner has created a savvy and enjoyable apocalyptic vision.

Small-town Midwestern sheriff David Dutton (Timothy Olyphant) has a pretty sweet set-up. He keeps the peace in the sleepy Iowa farming community where he grew up. His wife Judy (Radha Mitchell) -- the town's only doctor -- is expecting their first child. His deputy Russell (Joe Anderson) and the townspeople respect his quiet authority. Everything turns to hell quickly though, when a plane carrying secret government bio-agents crashes into the town's water supply. In short order the federal government has enacted a quarantine protocol, and the affected population has started getting an itch for killing.

One of "The Crazies" biggest strengths is the speed and efficiency with which Eisner conveys this basic information and moves quickly into the film's true purpose for being. From the jump we're rarely afforded more than a minute to collect ourselves after each effectively rendered set-piece before being thrown into the next fire. The underlying concept -- a small town forcibly cut off from civilization with a handful of survivors left to fend for themselves -- is so simple and yet so effective that its to Eisner's credit that he never confuses the issue with divergent plot threads or imposing ideology.

This strength does give way to one of the film's few weaknesses. By choosing to so thoroughly play to the set-up's inherent drama -- crazies attack, soldiers attack, crazies attack again -- "The Crazies" does get into a rhythm that, while still effective at delivering tension, feels a little too neat, particularly when the shit is hitting the fan everywhere else. And while Eisner and company allow the more subversive, conspiratorial elements to creep into the proceedings in the film's third act, there's never quite the panache or gusto that Romero brought to the same material.

"The Crazies," unlike some of the more reprehensible horror remakes, succeeds by finding a sweet spot between the glossiness of Platinum Dunes-esque updates and the grittiness of the 70s era originals. Eisner brings a level of polish to the proceedings that could easily have degenerated into a cold, anesthetic feel. But he knows his way around the genre effectively enough to give this "Crazies" an authentic air. It also helps that Olyphant, Mitchell and especially Joe Anderson bring strong performances to well-drawn characters. While it never elevates itself to the level of classic, "The Crazies" wins by finding a good balance of genre elements and not trying to do too much. It doesn't provide a reason to ignore the original, but for those who never loved Romero's effort, this "Crazies" is still worthy of a look.