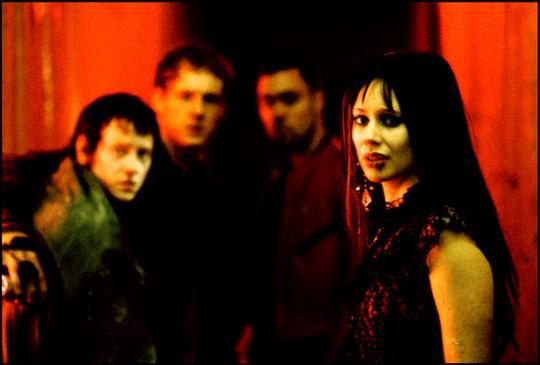 Anna is a young archaeologist who has made the find of her career; an old hospital, built atop an even older orphanage that dates back to the times of the plague. The problem is, the powers that be fear that opening the foundations of this old orphanage could create the dawn of the plague in the new era. Turns out they were close, because something darker lurks beneath as Anna starts to find connections between the orphanage and records of unexplained child deaths.

Gina Phillips, star of the truly wonderful genre fest "Dead & Breakfast", as well as "Jeepers Creepers" comes back once again with another attempt at a starring horror role. The pictures and story contained on the back of the box look promising; plague doctors, ghost children, the works. Too bad the movie contained within doesn’t quite live up to the imagery on the packaging. That’s not to fault Gina however. Ms. Phillips does a very nice job conveying her character, her fears, and her archaeologist-ness; there's just not a lot there for her to work with. Or perhaps too much of it.

One of the biggest faults I found with "Sick House" was that it ran on far too long. Yes, there’s a story lying underneath it all to be told, but by the time the last twenty minutes rolled around all I could do was hope that it would be over soon. There are a lot of good elements here; ghosts, some gore, some of the plot. The problem is that it’s all thrown together in a large messy jumble that’s hard to follow.

For instance, there’s a subplot with four teens that wander into the hospital after nasty car wreck. As you can imagine, these four are all dealt with in time in somewhat spectacular and gory fashions. However, we only get a quick glimpse in the final stages of act three as to what their deaths meant and how they affected the overall plot. By the time this almost minor point came to light, I didn’t really give a shit.

The other outlying issue, perhaps the one that made me pay little attention above all else, is the use of what I call the "MTV Jerky Cam". Whenever the ghosties would show up to wreak some havoc, the camera man went into convulsions. Sure, it lends a certain aesthetic to the scene, but when it goes so far as to actually obscure what is happening from the viewer, the point is lost. If I could have gotten a good look at what Mr. Plague Doctor was doing, I might have been more scared. Add to this the four annoying teens that I was ready to watch die shortly after their entrance and you can see why this one was so hard to watch.

"The Sick House" does have some good acting from Gina Phillips, and a few good elements of horror. Unfortunately it’s all thrown together in a bit of a jumbled mess that makes it hard to sit through, and frankly rather boring by the end. I couldn’t honestly tell you what exactly happens at the end, simply because I don’t really remember. It’s too foggy since I tuned my brain out a good twenty minutes beforehand. That should be all you need to know.