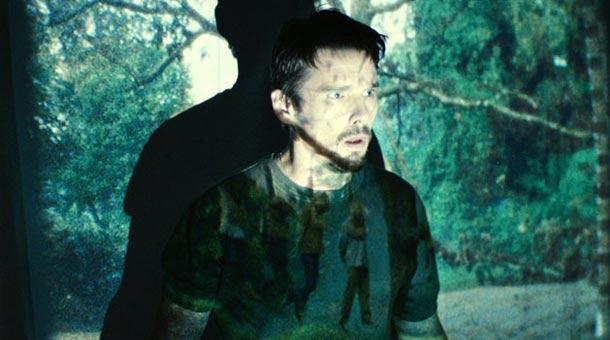 "Sinister" is an interesting little film. Originally slated for a limited release this fall, it will now be featured in over 2,000 theaters this Friday, due mostly from positive word of mouth from early screenings. After seeing it with an advance audience myself, it's not hard to see why.

The film stars Ethan Hawke as author Ellison Oswalt. Famous for a series of true crime novels and desperately clinging to his "15 minutes", Ellison moves his family into a house where a grisly murder took place in order to study the case for his next book. Despite tension with his wife over the subject (she's initially lied to about there being a connection), and dealing with the increasingly unstable mental condition of his children, Oswalt sets forth to research the case. Along the way he discovers a disturbing pattern; a string of murders across the country that were committed nearly 40 years apart, all sharing the same ritualistic trappings.

He discovers this through a series of old Super 8 film reels in the attic of his new home, which he soon learns contain footage of each of the grisly slayings. Disturbed by what he sees, he struggles with the notion of putting his family in danger for the sake of furthering his career, but ultimately - with a little help from his trusty bottle of whisky - decides it's a risk worth taking. What follows is a journey into the supernatural Oswalt is definitely not prepared for.

"Sinister" is something of a hybrid film. Half 70's slow-burn and half modern found footage jump-fest, it's an interesting blend of old and new. Much time is dedicated to setting up the atmosphere of Oswalt's late night research sessions. The director has a particular fetish for showing the tactile workings of the Super 8 projector, making sure to show closeups of Oswalt winding the machine and flicking the chunky old switches almost every time he uses it. There are also lots of methodical sequences of Oswalt prowling through his house looking for the source of noises, and a very effective focus on the eeriness present in his back yard, where the murders actually took place. If you look closely enough, you can even spot a smoke machine or two worked into the proceedings, a true sign someone has studied the workings of the horror of decade's past.

Which makes the found footage aspects of "Sinister" all the more interesting. Although it very much has a traditional narrative, many of the scares in the film come from the audience watching the lost footage with Oswalt. These sessions are sometimes understated and creepy, and other times mere vehicles for the type of loud, nonsensical jump-scares that modern audiences seem to love. If not exactly the most subtle scare tactic the film uses, one would be hard pressed to argue that they're not effective. The result of the blending of these two styles is that "Sinister", although a fairly low-key affair, manages to keep the suspense ratcheted up for almost the entirety of its two hour running time.

Hawke is, admittedly, overly hammy at times while trying to portray this writer on the brink of losing his mind who just can't help but push further into the unknown. The actress playing his wife, UK native Juliet Rylance (using her real accent), is suitably sympathetic despite the writers making her character a bit of a dolt (Her husband is clearly lying about what happened in the house when they move in, and he's lied to her before about this type of thing, but she seems none the wiser).

In addition to some of these (possibly) unintentionally humorous moments, the film does break up the tension a bit with a few lighter sequences between Oswalt and a local town deputy helping him with his research. He starts out as a bit of a "Mayberry" type character, proving a comedic foil to the dark, brooding Oswalt. These moments, at times, strain the overall dark tone the film is going for, but ultimately work if you're willing to go along for the ride. Along the way former Congressman and Law & Order star Fred Thompson shows up as an unfriendly Sheriff, as well as Vincent D'Onofrio (uncredited despite appearing in several scenes) as a professor helping Oswalt research the occult aspects of the murders.

"Sinister" does not reinvent the wheel, but that's not to say that it isn't ambitious. It takes the traditional ghost-house style; ie loud noises and people tracking them down, and throws a spooky, supernatural wrench into the mix. It jumps back and forth between old school atmosphere and new school schlock pretty effortlessly, and ultimately ends up being exactly the kind of film you want to hit theaters around Halloween time. Scary, nasty, fun, and not too serious for its own good. And despite the fact that it may stumble a bit during its final moments, you almost never know what's going to happen next in "Sinister", and that alone is worth the price of admission.