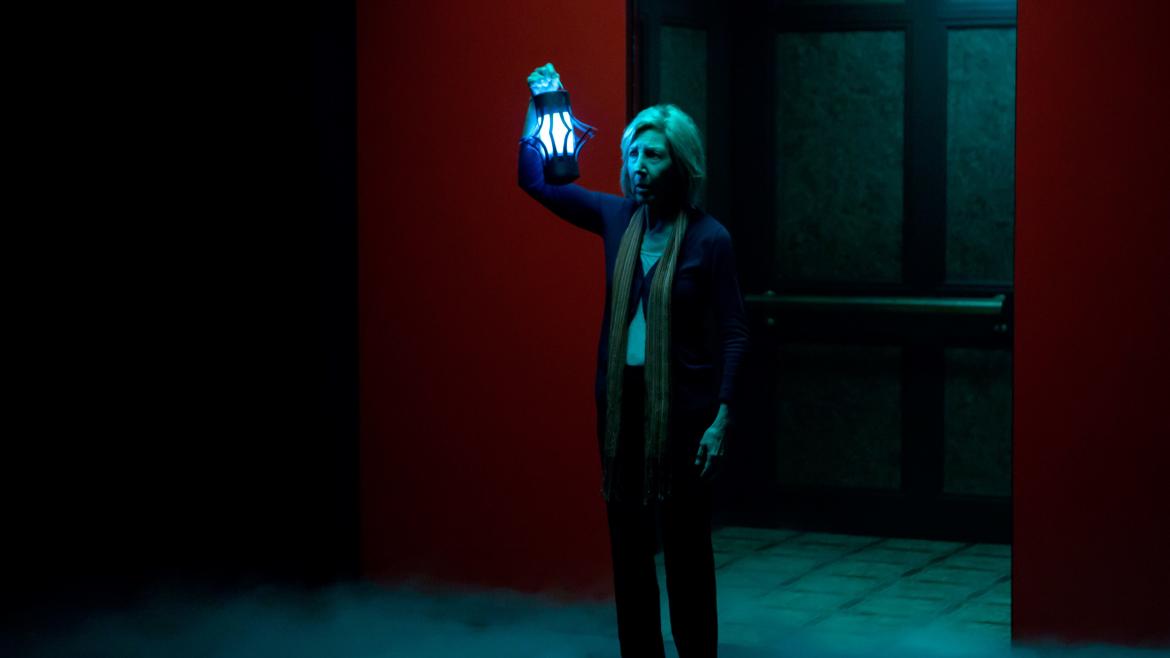 In a climate where it seems like just about every box office success prompts a sequel, the justifications for such films has become a secondary concern. From a logical and money-making standpoint, this makes sense. A sequel or remake, in theory, brings with it the initiated audience who enjoyed the first film, as well as drawing in new viewers who aren't familiar with the original source material. The problem, often, with these films is that they take what was an novel and exciting idea and boil it down to its ingredients; trotting the same tropes out again and again until they become only shadows of their former selves. One production company in particular that seems to have some noteworthy examples of these so-called "cash grabs" would be Blumhouse Productions, who produced such films as Paranormal Activity, Sinister, Ouji, and Unfriended (to name a few.) And this is the production company that brings us the third chapter in the Insidious franchise.

Insidious: Chapter 3 has the distinction of not only being a rather unnecessary installment in the story, but being a prequel as well. Set three years before Insidious, this film follows Quinn Brenner, a teenage girl who is struggling to come to terms with the death of her mother and having a hard time relating to her father. After seeking the help of Elyse Rainier (Lin Shaye), a newly retired medium, to contact her mother's spirit, Quinn is advised to stop trying to reach out. Elyse intones the ominous warning that when you try to speak to one person on the other side, they can all hear you. So, naturally, we immediately cut to a scene in which Quinn is laying in bed awake at night, calling out to her dead mother. From there the story splits into two arcs, one following Quinn as whatever is haunting her grows more persistent, and the other following Elyse as she struggles to feel comfortable with her gift again.

Insidious: Chapter 3 is a strange movie for many reasons. It’s position in the timeline seems an odd choice. This is a series that didn’t really need a prequel and doesn’t offer any convincing justification for the creation of one. Not to mention that absolutely nothing about the costuming or tech in this movie is remotely time-appropriate for 2003. But even if you can get to the point of accepting that this film exists, there are more problems. Quinn, our apparent protagonist is the worst kind of whiney and unsympathetic teenage character. For a character that takes quite a beating both physically and emotionally throughout the film, I found myself completely unable to care or be invested at all. And the supporting cast isn’t much better. Many of the players—including Quinn’s brother, best friend, and love interest—disappear and reappear haphazardly according to the plot, while her father (Dermot Mulroney) is ineffectual at best.

This film also falls into one of the most fatal of prequel flaws. Often, a film that is setting itself before an established story will try to include nods to the original, allowing fans to see fun connections and learn about the origins of certain plot points. Each of these references in Insidious: Chapter 3 felt far too heavy-handed, as though the directer not only presented them on a silver platter, but then rubbed the audience’s nose in them to be sure you got the point. Not to mention that most of these “origin stories” were for innocuous aspects of the story that no one needed background on in the first place.

Overall, Insidious: Chapter 3 is about as bland and uninteresting a modern horror film as we will likely see this year. From its over-reliance on incredibly loud and nonsensical jump-scares to its cookie-cutter plot, there isn’t a lot of fun to be had here. First time director Leigh Whannel does use a few interesting shots, but at best this film looks too much like a Waaniverse knockoff. Save yourself the ticket price and just surf the web for some gifs of Lin Shaye kicking the everliving crap out of some ghosts. You’ll thank me later.