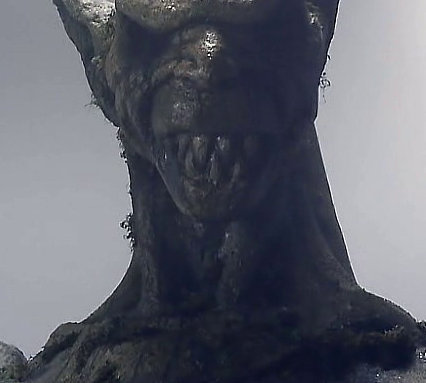 Carmen (Cindy Sampson) an aggressive young journalist comes across the story of a young American who has vanished in a remote Polish village. Going behind her editor’s back she enlists her boyfriend Marcus (Aaron Ashmore) and her intern Sara (Meghan Heffern) to investigate. Once they arrive they encounter hostile locals that tell them in no uncertain terms to leave. Undeterred, the trio stumbles onto a much deeper mystery centering on a demonic statue shrouded by mist in the middle of the forest.  By the time they uncover the truth, they’re in too far over their heads to retreat to safety.

Jon Knautz achieved notoriety for his first feature "Jack Brooks: Monster Slayer". The film gave audiences a fun, almost Indiana Jones take on monster hunting. Rather than stick to the lighter fare, Knautz follows up with a straight up horror feature for his sophomore effort. Effective use of jump scares; excellent sound design and a blood soaked third act provide the highlights. Overall, “The Shrine” is a mixed bag but the good outweighs the bad.

Knautz does have the habit of falling in to horror movie clichés. Standard tropes abound, whether it’s the “fish out of water element” with the three reporters, or a young girl that knows far more than she lets on, or locals that are hostile from the get go for no reason. You might start to fidget a bit in your seat with the feeling of “been there, done that” early on, but from the midpoint onwards “The Shrine” finds its legs. I’m never going to write off a film where the signature kill features driving a spiked mask through one’s eye sockets with a sledgehammer.

Knautz makes a wise decision in setting the action in Poland and having the locals speak in their native tongue. He chooses not to provide subtitles, which keeps both his American characters and audiences in the dark. Early on I couldn’t figure a sane reason to do this except to yell “You leave and take your swanky American blue jeans with you!” in my most snarky internal voice every time the group encountered a hostile local. In reality, the technique allows Knautz to spread “The Shrine”‘s reveal a little at a time. Character interactions amongst one another and body language bring he audience up to speed and lay out the true motivations of the villagers and give you a much different perspective on the film during its last act.

The largest weakness of “The Shrine” is its poor handling of women. At the outset Carmen comes off as a manipulative shrew. She’s untrustworthy, goes behind her editor’s back and withholds crucial and potentially life threatening information from her boyfriend in order to convince him to tagalong as her photographer. “The Shrine” heaps very graphic and brutal violence on its two female leads yet cuts away from a male character that suffers the same fate. There’s an underlying message that the women should just stay in the background and await instructions from the men, all of whom come off as heroic and righteous in their actions. It’s a bit too on the nose to be accidental.

With an intriguing story and good balance between practical and CGI effects “The Shrine” manages to overcome it's budgetary restrictions. If nothing else, it's the only film streaming on Netflix that's had me asking the question, “Why is that dude who looks like Mac from It's Always Sunny In Philadelphia wearing Batman gauntlets right now?”