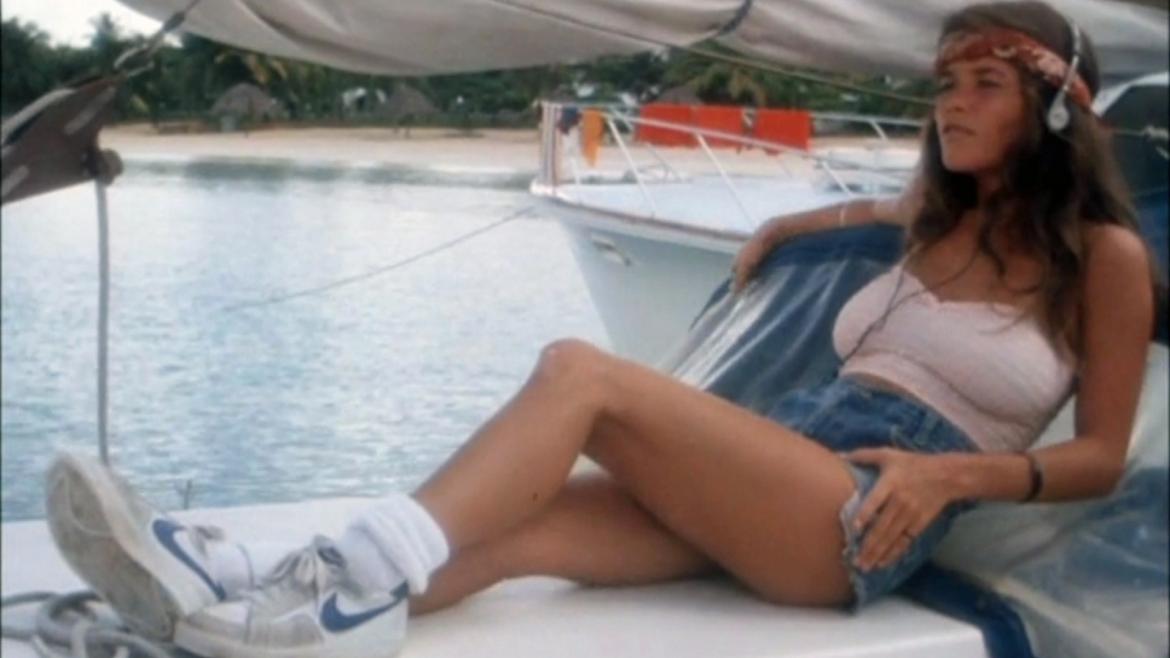 Lance Henriksen is Police Chief Martin Brody, excuse me, Police Chief Steve Kimbrough. He’s grizzled, chiseled and he’s the only law in Amity… excuse me again, Elysium Island. His estranged wife Ann and is a microbiologist working as a dive instructor. No one is quite sure why. Their teenage son Chris is an affable kid who has a troublingly familiar way with his mother; unless unbeknownst to most of us there is some obscure Caribbean custom that normalizes teasing your naked mom with fish when she is in bed. Ann and Chris live in the resort hotel where Ann works. Steve apparently lives on the water.

Elysium Island is flooded by boatloads of tourists; most conspicuously a swinging-dick diver with John Parr hair named Tyler Sherman. Sherman is hot after Ann’s fanny and signs up for her dive class. During that class, Freddie Mercury’s Latino cousin (no not really) disappears in the sunken wreck of an old naval research vessel. When Ann goes to retrieve him she finds his floating carcass, chewed to ribbons.

In the aftermath of the tragedy, Sherman tries to cozy up next to Ann. Meanwhile, Chris sets off on an intra-island cruise as a deckhand, with Jonathan Quayle Higgins (again, not really) and his improbably fetching daughter. For his part Steve uses his helicopter P.A. to yell at people and employs nothing approximating an investigative technique in trying to stem the rising death toll. Of course, the real culprit is a school of genetically modified Piranha/Grunion/Exocoetidae (flying fish) hatched from a batch of eggs that went unrecovered from the sunken naval wreckage.

This is the set-up of “Piranha 2: The Spawning” , James Cameron’s directorial debut and celluloid proof that Lance Henriksen has always been between 45 and 60 years of age. There are other cinematic tidbits that are proven beyond doubt by "Piranha 2". For instance, the Italian film industry of the late 70’s early 80’s would not jump off of a dead horse until every salvageable piece of meat was stripped from its skeleton. Much as they did with Zombies, Nazis, Nuns, etc. Italian producers pounced on the “Jaws” structure and churned out several knock-offs including “Orca” , “ Tentacles” , “The Last Shark” , “ Devil Fish” , and “Piranha 2”. Actually this film is a reimagining/rip-off/sequel of and to a rip-off, since the original “Piranha” was not produced by the Italians but has virtually an identical concept.

If you are someone who loves James Cameron’s work and you haven’t seen this one, stay away. Very seldom throughout its running time does this resemble a Cameron film. In fact it is about 75% Italian trash (this is a complimentary term) and 15% misguided effort to establish a character based story. From the familiar jazzy music to the unmotivated nudity (of which there is too little) to the endearingly cheap creature effects, “Piranha 2” simply hemorrhages olive oil.

Irrespective of genre, there are certain qualities that most of these spaghetti knock-offs possess. They are often loaded with gore, nudity and sub-par acting. Equally true is that the intentional gags usually fail and the unintentional laughs are absolute entertainment gold. “Piranha 2” is an exception to most of these standards only in degree of severity. These exceptions may well be due to Cameron’s damnable American-traditionalist instinct imploring him to rein in the chaos. The good news is that for the most part the Italian goofcore tradition wins out.

If I were to write a synopsis of the important aspects of this film it would go something like:

A sunken wreckage nookie fest goes bad when a winged school of baneful Big Mouth Billy Bass eat the lovers’ genitals. Back on shore a cougar with female pattern baldness stalks unsuspecting pool boys, while a dorky dentist falls for the ugliest woman on the island. A stuttering chef is duped out of dinner by two swinging pirate booties from the S.S. Poon Schooner and the annual grunion fest is transformed into a bloodbath by hand-puppet Piranha while a heavy set man is heard to say “There’s only one way for a fat guy to be first when running for the beach… Cheat!”

If this sounds like fun and you have never dipped your toe into the dangerously addictive waters of the Italian cheese spring then “Piranha 2: The Spawning” is worth a try. If you are more of a head-first type you should go rent “Zombie Holocaust" (aka "Dr. Butcher M.D.") and watch it sober. Or to approximate that experience, invite friends over, drink , disrobe, lift weights, hit up the hot tub, go bow hunting and cap the night off with a round of whippits.