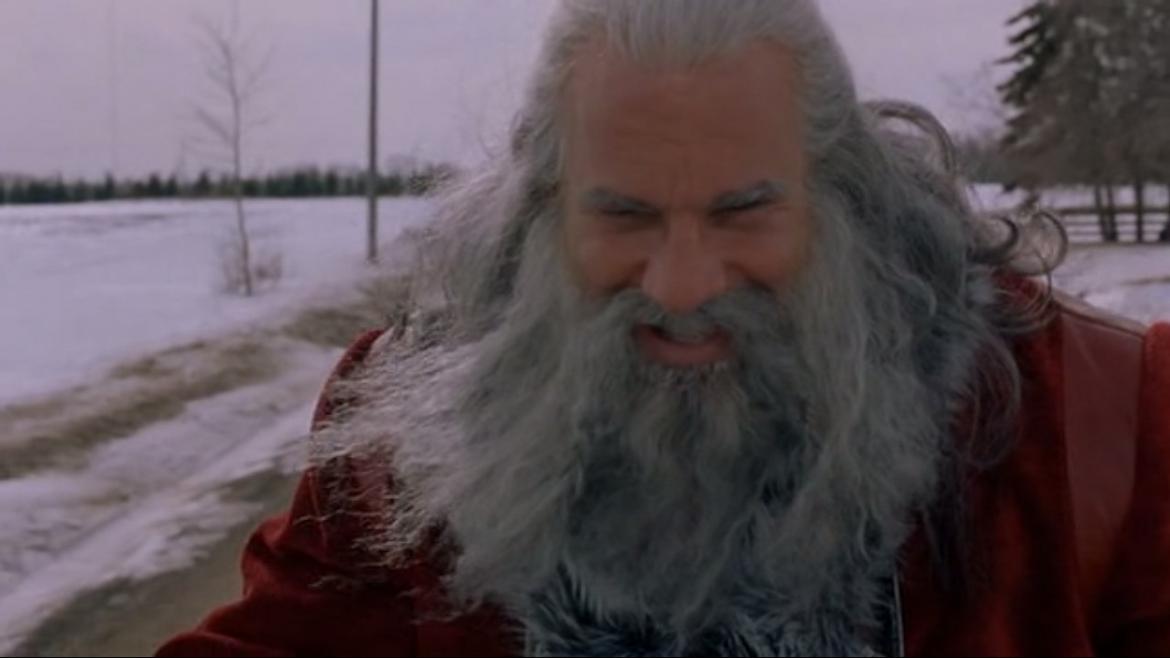 As it turns out, the real Santa (played by Jewish wrestler Bill Goldberg) isn't the bringer of good cheer as the legends claim, but rather the son of Satan. Having lost a bet to an angel a thousand years ago (a Curling bet, no less) Santa has been forced to bring presents and merriment to the people of the world every year on Christmas. The year is now 2005, exactly 1,000 years since the bet was made, and it's time for Santa to finally bring down the reign of terror he has been waiting a millennia for.

That's the basic synopsis for "Santa's Slay," and if you were amused or appalled by it, that's probably a good way to judge what enjoyment (if any) you'll gain from watching this film. The first scene is a pretty clear indication that the experience is NOT to be taken seriously. In a shockingly star-studded scene, we are shown a very crass and dysfunctional family sitting down to have Christmas dinner.

After a few minutes of snarky dialog, everyone is startled by a noise at the chimney. Before anyone can react, Santa comes crashing down, breaks through the chimney, kicks the dog into the ceiling fan, and then proceeds to hilariously butcher everyone in the room. I was laughing so loud at this point that my girlfriend came in the room and asked me if everything was okay. Before you even have a chance to react, the opening credits pop up and this baby swings into full gear.

We're then introduced to our main characters. "Grandpa" (yes, just Grandpa) is a crazy old codger that everyone in the town thinks is nuts. Nicholas Yuleson is his grandson who he (apparently) has raised for most of his life. There's never any real explanation as to what happened to Nick's parents, but in the grand scheme of things it's not all that important. What is important however, is that Grandpa is the only person who knows Santa's secret (for reasons that become apparent later).

Using an ancient manuscript, Grandpa has correctly predicted that this will be the year that Santa gets set free to bring death and destruction to humanity. He has built a bunker in the basement, and after Nicholas begins to suspect what is going on, lets his grandson in on the secret.

And that's the basic setup. Most of the film consists of Bill Goldberg running around and killing people in hilarious ways, while Grandpa, Nicholas and his girlfriend try and stop him. I must say, Bill Goldberg as Santa is actually pretty inspired casting. He's witty, funny, and most importantly very imposing. He does everything from burn down a strip club (great excuse to show some boobies) to killing a Jewish delicatessen with a Menorah. The pace never really lags, save for a few spots, and most of the film ends up being a very fun romp. My only complaint being that they should have stopped after the ice rink scene. It's set up as the finale, and then the film just keeps going.

The director's style is what really keeps the viewer plugged into an experience that could get old very fast. First time director David Steiman shows a real grasp on structure and style that is rarely apparent in a first effort. Everything from the set design, kinetic camera angles, to the tricked-out Christmas music present throughout. He does a great deal to maintain an over-the-top vibe that a film like this desperately needs. It's obvious that he knows this material well, and had a good grasp on how to present it.

I also have to say that I was pretty shocked at the budget apparent here. Santa's (actual) Slay is carried by some type of demonic bull with laser-red eyes, and there are a surprising amount of full on blue screen shots showing Goldberg flying. There are also a plethora of stunts, from multiple car flips to a rather intricate snowmobile chase that shows Santa throwing exploding presents from his slay. The special features make it apparent that the director was very skilled at stretching money, and that is a testament to how high class the final product ends up looking (despite the material).

And that's it really. I had a roaring good time with "Santa's Slay" and would highly recommend it for anyone out there looking for a good Christmas themed horror romp. It must be said that this is NOT for everyone, but only the campiest of camp fans. There is not a serious scare to be had here, and even some of the humor will probably not be funny to a lot of people.

If you catch it in the right mood however, there is a huge potential for fun and laughs. It's also the kind of film where the director's passion shines through every frame, and as a lover of film I connected with that from early on. This is someone making a Christmas themed horror film with pride, and you've got to love that.