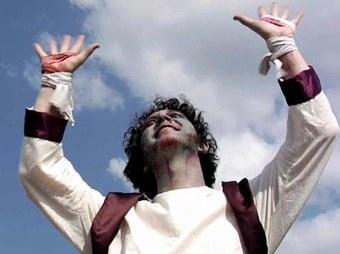 If you watch enough low budget horror movies you start to ask yourself if the people making these films actually think they're making art or they're just trying to get girls naked on film. "Zombie Christ" is that kind of movie and after watching it I'm 99% sure I know what the answer is. Alright to be fair this movie may have also been made to get someone's friend's band in a film. In any case, mission accomplished.

"Zombie Christ" opens up with a group of women dancing around a man who, from what I understood, is invoking Christ himself. This goes on for 7 minutes and yes, the women are completely naked. This pretty much sets the tone for the rest of the film. Confusion, bad acting and a ridiculous amount of nudity pretty much sum things up. The next thirty minutes consist of Zombie Christ going from house to house killing women shorty after they have disrobed. The highlight being a scene where we find out that Zombie Christ can heal himself by covering himself in the feces of a women who's just received communion. Seriously, that happened. But we do eventually get to a point where we get some plot. A woman, named Mary of course, and a investigator team up to find and destroy the evil spirit. Of course this is immediately followed by a fairly graphic sex scene that includes the zombie, a nun and a raw turkey drumstick. Seriously, that happened.

That's not to say the story doesn't have some interesting points. Surprisingly there was a lot of effort put into the story behind Zombie Christ's return from the grave and his blood thirst. I'm not going to try to explain it here because honestly I don't completely understand it but I have a sneaky suspicion that the filmmakers actually knew a lot about the bible and put a good amount of thought into how they were going to completely violate its meaning. I may be off here but I bet someone smarter than me could actually follow this and might even find it interesting.

If you can get past the bad quality of films like this you can usually find some pretty interesting effects. The lack of funds to do CGI, or good CGI at least, forces the filmmakers to come up with some creative ways to show their gore. It doesn't always work but you can usually appreciate the effort. Unfortunately "Zombie Christ" doesn't really put that effort into this. In one scene where an old man fights three younger men that he eventually kills they literally just smear some blood on his hands and let you fill in the blanks. I should probably mention after watching the film I still have no idea why the fight took place either. If there is a highlight though it would have to be Zombie Christ himself. Yes it's a medical lab skeleton covered in fake meat and yes it's ridiculous but in the context of the film you have to just sit back and accept it. Sure you can see the strings but you can't help but laugh, in a good way, when the zombie walks on water while he's chasing a woman in the woods. And yes, if you're wondering the woman is completely naked.

I'm not sure if it's good or bad that only a small group of people will actually see this film. The film's website proclaims this is "The most controversial movie ever made" and while that might not be true it is pretty offensive on a number of levels. Women, those with any sort of faith or anyone who appreciates the power of sight should probably avoid this film. But if you're meeting up with a group of friends to watch a movie and want to show the most ridiculous horror movie they'll probably ever see then "Zombie Christ" is your film. Oh and if you're into tattooed women getting nude then this is the film for you also as long as you don't mind watching them be violated by a skeleton. In any case there's an audience for this film, you just might want to avoid telling anyone you're a part of it.