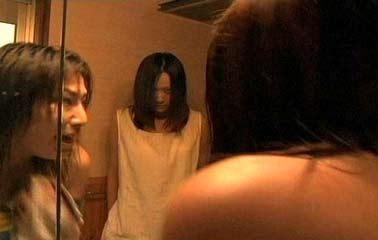 I had a pretty scary roommate once. Guy had a tendency to lock himself in his room and watch conspiracy theory videos he downloaded off of the internet for hours on end. He duct taped newspaper over his bedroom windows. There were two separate occasions where he broke down laughing uncontrollably in the shower. He played “DOOM” almost every waking hour. Oh, and he also loved Alanis Morrissette. Like I said, creepy dude. And unfortunately for the filmmakers behind 2010’s import horror flick, “The Roommate”, he was way creepier than anything in this film.

If you’ve seen any J-Horror film in the past decade and a half, you’ve seen this movie. The film follows two roommates living in Tokyo, Ayako and Tamaki. Thing seem to be perfect for the two, until Ayako’s estranged father pays a surprise visit. After his visit, and “mysterious” disappearance, things take a turn for the cliche. The ghost girl from “The Ring” shows up (or maybe it was the ghost from “Ju-On”, or “The Eye” or any other J-Horror film with a ghost made since 1997), and begins to do stereotypical creepy ghost things like turning the TV on to static, walking really slowly with her hair covering her face and making weird noises. Ayako starts to have terrible nightmares of cliched horror tropes, like “the guy vomiting up blood” or “the maggot infested corpse”. Concerned neighbors begin to investigate and also start to go missing. All this culminates in a horribly predictable “twist” ending, suitable for an M. Night Shyamalan film. This is really as by-the-numbers as a movie can get.

The production of the film also needs to be called into question. As there’s no IMDB page for this film (never a good sign), I don’t know the budget, but I can assume that it was pretty low. While I don’t ask for much from low-budget films when it comes to production values, there are some things here that are so obviously horrible that they really should have been addressed. There’s a brief scene showing the moon rising, that looks like it’s straight from an old-school full motion video MS-DOS game. It’s embarrassingly bad and the film would not suffer in the slightest if this scene were to be cut. Why is it left in? If you can’t pull off the effect and it serves no purpose in the film, just cut it. The sound effects are also atrocious. One of the big effects related to the ghost girl is the sound of creaking bones when she walks. Not only does the effect sound muffled, it’s at a level of volume that’s ridiculously too loud for any scene that it appears, and it’s never synched up to the motion on screen. There’s also some stabbing sound effects later in the film that sound like the stabbing sound effects from an old beat-em-up game like “Streets of Rage”. It’s horrible, and really ruins any sense of immersion.

Now I know this is no fault of the filmmakers, but the quality of the translation and the subtitle job here strongly detract from the film. All subtlety is lost due to the ridiculously simplified subtitles. There are some pretty strong sapphic vibes early on and, while it’s admittedly pretty obvious just from the visuals, subtitled lines such as “men are no good” and constant comments about being unable to marry drive the point into the ground and make it so obvious it becomes absurd. There are also numerous lines that make absolutely no sense which detract from the overall storyline as there are some plot points that I just flat out didn’t understand as a result.

While it’s generic and marred with multiple production problems, “The Roommate” isn’t an unwatchable film. It’s paced well, and I never found my attention wandering. It’s mercifully short, clocking in at slightly under 70 minutes, so you’re really not investing much time into catch this movie, so by the time you start finding yourself being bothered by how bland and hackneyed this film is, it’s almost over. If for some reason, you’ve never seen a J-Horror film and have access to this one, but nothing else, go ahead and pop it in. However, if you’ve seen the mainstays of the J-Horror genre, you’re not going to get anything new and really won’t miss anything by passing on it. Unless of course, you really like cookie cutter movies with poor translation, Super Nintendo sound effects and a bizarrely pointless sapphic touch.