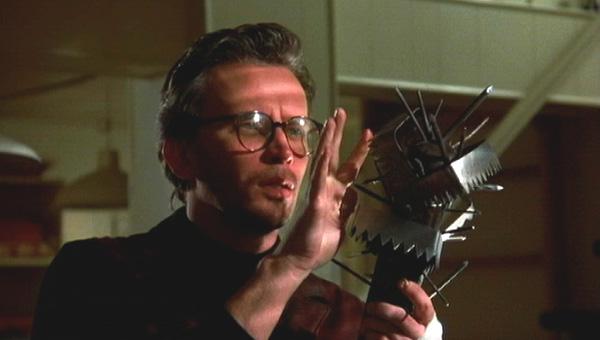 Helmed by "Cobra" director George P. Cosmatos, the quirky 1983 thriller "Of Unknown Origins" pits a mild-mannered, corporate ladder-climbing executive (Weller) against an intelligent, chew-happy rat within the cozy confines of the man's swank New York City townhouse. The concept is pure schlock, filtered through a major Hollywood studio and powered by solid director and a handful of strong performances. Had this beast been tackled by someone of Roger Corman's dodgy caliber, I strongly suspect the end result would have been completely different. Amazing what solid production values can accomplish.

Specifically, the film follows the exploits of Bart Hughes, an upwardly mobile professional who is literally on the cusp of bigger and brighter things deep within the inky black bowels of the corporate jungle. While his wife and son are off visiting her well-to-do parents, Bart spends most of his free time contemplating the finer points of his assignment, though his concentration is soon shattered by the sudden, unexplained appearance of several destroyed items around his home. The culprit, of course, is the legendary New York City rat, a particularly nasty beast whose only apparent purpose is to make Bart’s life a living Hell.

As the days wear on, Bart discovers that more and more of his possessions -- ranging from food to magazines to fluffy feather pillows -- are being ravaged by this unsightly creature, forcing our hero to place traps of varying degrees of deadliness all around the townhouse. The rat, who is always seen observing Bart from a distance, is well aware of what his adversary is up to, and manages to sneak the bait off the trap without causing the mechanism to activate. Eventually our hero, driven purely by obsession, takes his version of pest control to brink of lunacy, culminating in an epic, no-holds-barred showdown between man and nature.

Despite the presence of other characters, “Of Unknown Origin” is essentially a one-man show. While other actors and actresses pop in and out of the picture from time to time, Peter Weller is the guy with nearly all of the important screen time. Which is fine, really, since he’s one of the major reasons I decided to give this moderately-budgeted creature feature a spin in the first place. Watching him lock horns with this pint-sized terror is never dull, and because the film clocks in at just under 90 minutes, the concept never wears out its welcome. Cosmatos keeps the film evenly paced, allowing the vermin’s reign of terror to escalate naturally. Nothing ever feels rush or forced, even when Bart’s fragile stability begins to completely shatter. The climax, meanwhile, falters a bit; after all of that calculated terror, I would have appreciated a bloodier former of vindication.

Truthfully, the secret to the picture's overall success isn't Peter Weller's inhuman screams or Shannon Tweed's shower scene or rat guts stuck to spiky baseball bats -- it's Cosmastos' ability to make this pint-sized monster seem like a larger than life threat, a full-blown menace. What's more, the bastard is incredibly smart, and is always at least two steps ahead of his human prey for nearly the entire film. Anyone who's had to address a pest problem, be it big or small, can attest to the constant irritation and frustration associated with this sort of problem. "Of Unknown Origin" does an excellent job of capturing that sensation of overwhelming helplessness in an eerie and engaging fashion. A seriocomic classic.