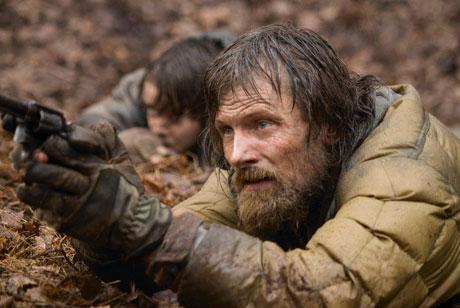 Although the film is being sold to audiences as a human drama, director John Hillcoat's atmospheric post-apocalyptic adventure "The Road" is actually a gritty, deliberately paced slice of quiet American horror. Circling the story's delicate father-son relationship are an abundance of cannibals, creepy beach-combing thieves, and a handful of moments that are sure to elicit audible gasps from unsuspecting viewers. Employing the word "beautiful" to describe something as bleak and disenchanted as "The Road" may sound like an exercise in lunacy, but it's the only word that springs to mind.

Set in the United States years after a mysterious event completely devastates everything under the sun, a nameless father (Viggo Mortensen) and his young son (Kodi Smit-McPhee) embark on a quest to reach the coastline, though what this particular section of the country offers in terms of peace and harmony isn't entirely clear. Regardless, the father assures his frequently terrified son that happiness lies at the edge of the ocean. Unfortunately, their adventure to locate this charred slice of the American Dream is overloaded with turmoil, pushing their relationship to the brink of destruction.

Despite the numerous diabolical scenarios peppered through "The Road," there really isn't much of a plot to speak of. The story, essentially, consists of its two protagonists moving cautiously from one location to the next while dealing with whatever or whomever stumbles across their path in the process. For some, the story may seem plodding and, at times, utterly listless, especially during the picture's admittedly bloated midsection. However, all of these delicate and frequently heartbreaking scenes serve a specific purpose, as they help the audience care for the plight of this dedicated father and his son. The film deftly blends drama, horror, and visceral action with surprising ease. Sliding this movie into one particular genre is certainly a challenge.

The secret to the film's success is "The Proposition" director John Hillcoat's stylish and even-handed approach to the material. Comparisons to the popular video game "Fallout 3" have been numerous, and they're certainly not without merit. And while the movie isn't nearly as graphically violent and foul-mouthed as its open-world counterpart, the imagery they share is undeniable. As the father and son make their way through this depressingly barren landscape, the audience is treated to an endless supply of crumbling buildings, acres of leafless trees, several tarnished townships, and scores of goons, thugs, and criminals dressed in tattered clothing. The scene in which the father digs an unopened can of soda from a destroyed vending machine reminded so much of my own Nuka Cola expeditions that I frequently felt the compulsion to save my game.

As crafty as the film's aesthetic may be, "The Road" would have been nothing without Viggo Mortensen and Kodi Smit-McPhee. After all, their strained relationship is the crux of the story, and it's the only reason to immerse yourself in this dreary universe. Mortensen is almost unrecognizable, and as the story wears on, you find yourself completely forgetting that this is the same guy who brought Aragon to life in Peter Jackson's "Lord of the Rings" trilogy. His performance here is intense, heartfelt, and, surprisingly, suitably restrained. It would have been easy to take this role completely over-the-top, but Mortensen manages to keep it grounded without sacrificing the character's soul in the process. Smit-McPhee, meanwhile, deserves an Oscar. The boy exudes talent, and his turn in "The Road" is nothing short of phenomenal.

In less capable hands, “The Road” could have easily become an excursion into mindless exploitation and needless excess. The material is ripe for such heavy-handed treatment, though Hillcoat intelligently keeps the film focused on the relationship between a desperate father and his growing boy. Keep in mind, however, that the picture does pack both an emotional and visceral punch, especially during the handful of character-developing flashbacks sprinkled throughout the story. "The Road" may present itself as yet another tear-jerking father-son drama oozing with Oscar potential, but it's true nature is closer to horror than one might think.

I Trapped the Devil