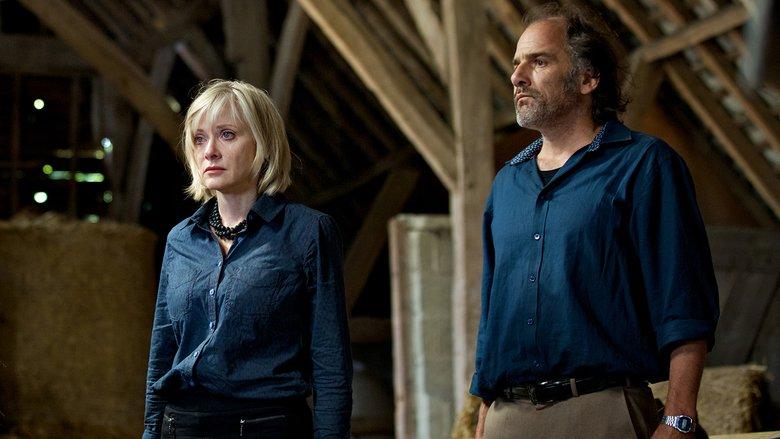 It's been quite some time since we've been treated to a good killer hitchhiker movie and with Abner Pastoll's second full length feature, Road Games, I for one would be happy to see a bunch more coming down the pipeline. However, with any luck they will take the baton from Pastoll and find ways to patch up the holes the filmmaker has left on the table here.

Set on the French countryside where a wayward traveler, Jack (Andrew Simpson) finds himself unable to hitch a ride, when the lovely Véronique (Joséphine de La Baume) joins him after being unceremoniously dumped on the road by her previous ride. The two get to know each other before accepting a ride from the odd Grizard (Frédéric Pierrot) who takes them to his lovely home to stay and have a warm meal prepared by his American wife, Mary (Barbara Crampton). Before long the seemingly well-to-do couple show signs that Jack and his new companion might be in more danger than they previously thought.

Pastoll does his absolute best to present to the audience a mystery where the answers are all right under your nose. His script insists that it is smarter than your average genre fan, when in fact if you've seen a movie like this before, you will call Pastoll's bluff long before he goes all-in. It certainly does not play into the film's favor that Simpson is not well-equipped to play the victim. He and Baume have a lot of chemistry, but even that detracts from the more interesting angle the film has going for it and that's the well-paced and tense interactions between the four characters. Pierrot in-particular dominates every scene and as the viewer you will beg for the film to focus more on the character's electric and eccentric personality that switches on a dime to being intimidating.

The beautiful scenery adds to the sense of place in the film, but is never a key piece of the film's tense sequences. As soon as the film shifts into finally revealing the twist the script's dazzling use of language (switches between French and English) suddenly becomes its detriment- breeding the type of moments that infuriate audiences to scream at the screen as one small moment could deflate the situation at hand, but characters frustratingly do everything except what's in their best interest.

Pastoll certainly seems like a filmmaker who knows a thing or two about a thing or to and his skill as a director is just one of those things that he does exceedingly well. His writing hits some euphoric high points, but tumbles down at an alarming rate as well. Road Games is as captivating as it is frustrating before settling for being derivative and predictable. Come for Pierrot and Baume's enchanting performances and leave before the final 20 minutes and you might just catch the best of what Road Games has to offer.