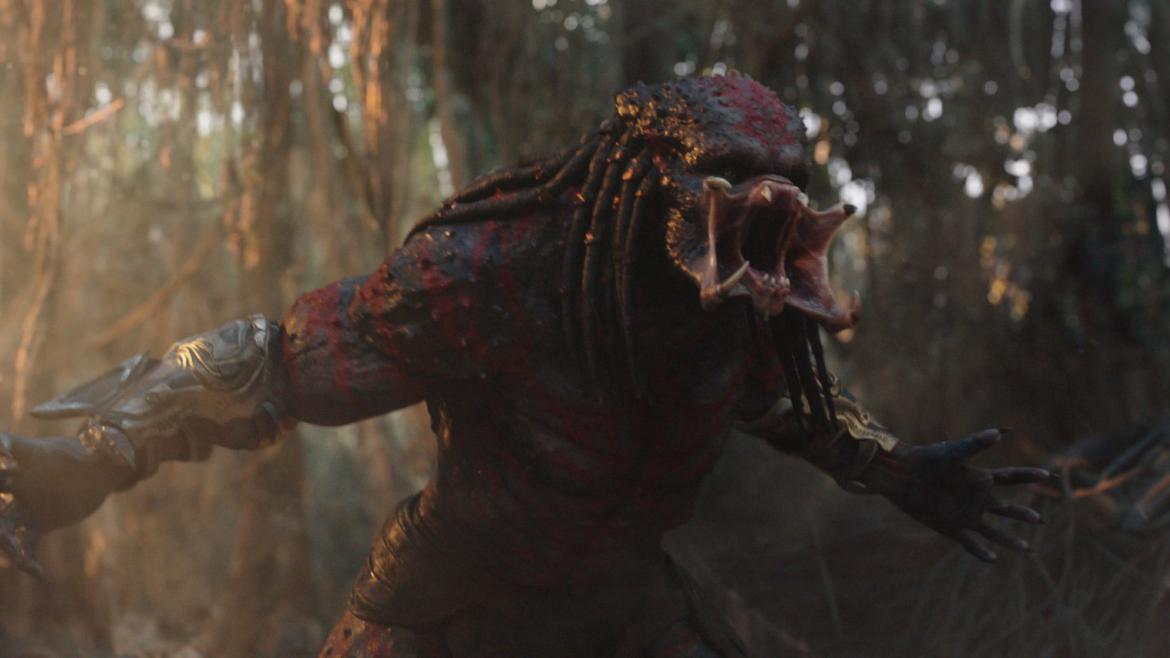 It's safe to say The Predator's path to the big screen was not a smooth one. The production was marred by various issues including reshoots capped off by the emergence of a final hour casting controversy prior to release. Even still, production issues and moral stances aside, Shane Black's latest entry into this continuously rocky franchise stunk of muddled intentions from the get-go, an obstacle that foregrounds the filmmakers' questionable vision in The Predator's final moments.

The Predator canonically picks up after the 1987 classic and it's 1990 sequel (which took place in 1997). The film positions a ragtag group of loonies on the way to be lobotomized for various war crimes in the middle of a three-way intergalactic brawl. A rogue Predator crash lands on Earth as it was escaping another much larger Predator in pursuit. A shady government agency that's been tracking Predator activity since they first arrived back in 1987 has its sights on both aliens. Also in the mix is Rory (Jacob Tremblay), the son of on of the loonies, Quinn (Boyd Holbrook), who is being hunted by both Predators due to a valuable piece of alien hardware that mistakenly ended up in Rory's possession.

To put it mildly, The Predator is a mess. Even if you ignore the plethora of production issues, the overall tone and direction Black and co-writer Fred Dekker have taken here is devastatingly misguided. The opening moments have a cringeworthy off-brand Star Wars vibe complete with a knock off John Williams-esque score which transitions into the trademark Predator violence and musical theme. The juxtaposition of the two is immensely jarring. The balance of humor, action, and horror is woefully handled and often feels as though the Black & Dekker combo wanted this to be a Predator/Monster Squad crossover. Separately, those are exceptional flavors, but put them together and something has gone horribly wrong.

Tangled in the web of chaos are some pretty fun performances from Sterling K. Brown and Trevante Rhodes. Brown is reveling in his fast talking villainy whole Rhodes' playful badass persona is just what the group of loonies needs to keep them in check. However, the film fails to extend this characterization to the rest of the ensemble, leading to confusing gaps and consistency. Additionally, a major character's death falls victim to the film's hacked up editing, passing so fast there's legitimately no time to react and even understand what just happened. Perhaps this is why no other character remarks on the incident for the remainder of the film.

In spite of all of The Predator's issues it is possible to have fun with the interplay between the characters. Like any comedy the jokes hit and miss, but in Black & Dekker's script the misses REALLY miss while certain gags seem like a cut scene from a Scary Movie parody. Even if you try to view this from the perspective of 80's action satire it's nearly impossible to shake the idea that some of this is straight up parody mixed with our contemporary superhero obsessed culture. This latter influence is certainly evident in the film's final moments which further cement just how confused everyone involved in this production was.

Adding to the confusion is the marketing and publicity given by the studio and Black himself. The studio certainly sold the off-putting tonal inconsistency with its variety of bizarre trailers. Black on the other hand once promised that he planned to make the Predator scary again and reshot the ending to do just that. Based on what we were given, Black might be on the level of world's most quirky comedians because nothing in this movie is even remotely scary-aside from the classic look of the Predator. Unless of course you think the Predator using a severed arm to give a truck driver a thumbs up is your idea of terrifying cinema. The ending is especially not scary and may be the most laughable aspect of this entire debacle. Weighed against original intentions this is unfortunate evidence of a studio and director not seeing eye to eye, adding to the tonal discourse that Black is likely to be pinned for this debacle.

As a reboot this would certainly be one way to go with the Predator mythology that is entertaining in its own special way. As an extension of the original and it's sequel The Predator is a depressing failure on every level, ripe to be ripped apart with nitpicks and major plot holes alike. This is one Predator flick that has no business on the big screen and will end up as a major red flag on Shane Black's resume.