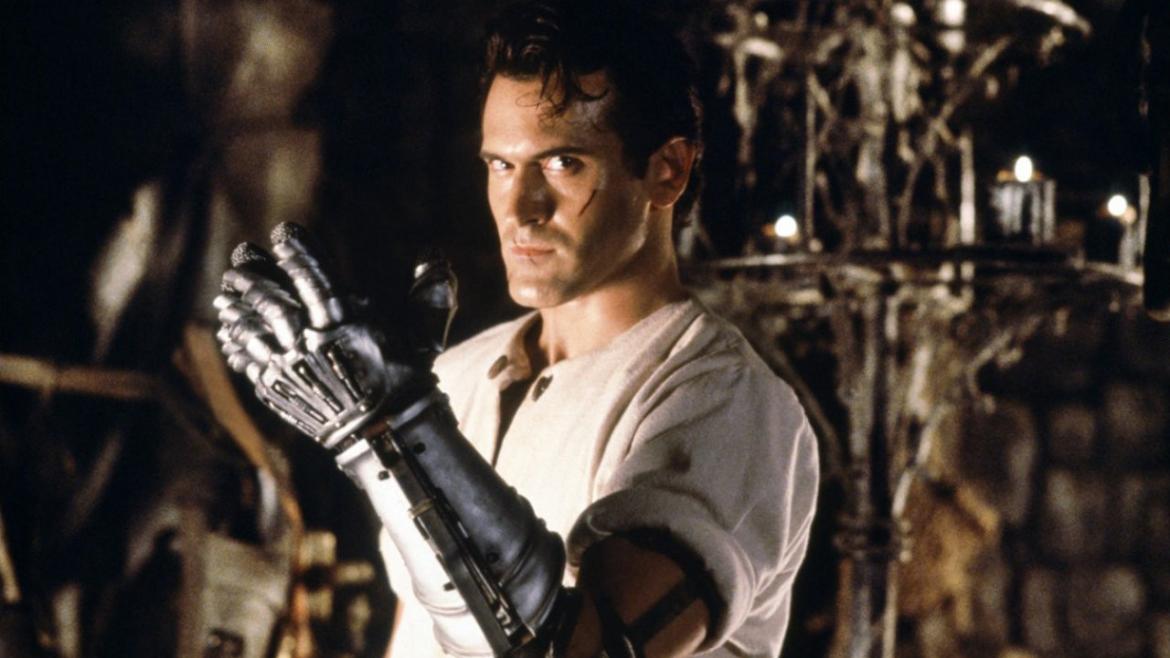 If there is one thing that stays consistent between the Evil Dead films, it is that almost nothing stays the same, except that Ash has a girlfriend named Linda who he takes to a cabin in the woods where some bad shit happens. I suspect that if you were to watch all three of Sam Raimi’s Evil Dead films, you would be left with a feeling not unlike the one you get from watching the Darkest Timeline episode of Community. In every version of the story, Ash takes his girlfriend to a cabin. Who they are accompanied by and what comes of the trip are the variables.

Army of Darkness opens as Evil Dead 2 does, with a reenactment of a condensed version of the story. The friends from the first movie and strangers from the second film have all fallen away and it is just Ash and Linda at this cabin, until the Necronomicon is found and the Deadites attack. Picking up where Evil Dead 2 left off, Ash is now stuck in 1300 A.D., held prisoner on suspicion of being an enemy soldier. Despite his best efforts to convince everyone that he is from the future, his cries fall on deaf ears—except for the Wiseman, who believes that Ash has come to fulfill an ancient prophecy. Once Ash proves himself to be capable of destroying deadites however, they change their tune. The Wiseman sends him on a quest to find the Necronomicon, promising that once he retrieves it they will be able to send him home, but nothing is ever that simple for Ash.

When watching The Evil Dead trilogy, it is easy to establish an evolution. Made on a shoestring budget, the first film is an accomplishment in filmmaking. The truly gruesome exploitation film has gore and viscera dripping from every frame and finds its triumph in its absurdity. When Evil Dead 2 came around, Sam Raimi threw fans the exact same story, with much more intentional camp and humor, and they ate it up. By the time Army of Darkness was released in the early nineties, Raimi had essentially exported our hero and the entire story to a Renaissance Fair. The slapstick from Evil Dead 2 is still present, if not more finely honed by the release of his third movie—one particular scene of a two-headed Ash punching himself in the faces is particularly amusing. And speaking of our protagonist, he has morphed from the fairly bland and quiet character he was in the first film, to a ludicrous caricature of a movie savior; who speaks almost exclusively in catchphrases.

Never fear, all of Raimi’s signature camera work is still present, from his ever-shaky and jolting races through the woods to his quick zooms, there is plenty for fans to enjoy. The gore quotient may be lower than in earlier movies, but that doesn’t mean we don’t still get a giant geyser of blood within the first fifteen minutes. Finally, Raimi manages to not let his larger budget change his overall approach to visual effects. Despite the fact that it was made in a time when CGI was very much in vogue, Raimi stuck mostly to his practical effects roots. Case and point being the army of stop-motion skeletons that Ash and the knights do battle with in the film’s climax. There is something endearing about it that harkens back to the fabulous effects of the films that came before.

It would be virtually impossible to think of any other franchise that could throw itself into the Middle Ages and not bomb, but it is precisely the unserious nature with which this film presents itself that is its redeeming quality. Sam Raimi and Bruce Campbell jump headfirst into the story in much the same way that that Ash somersaults into The Pit; as though there is no other way.