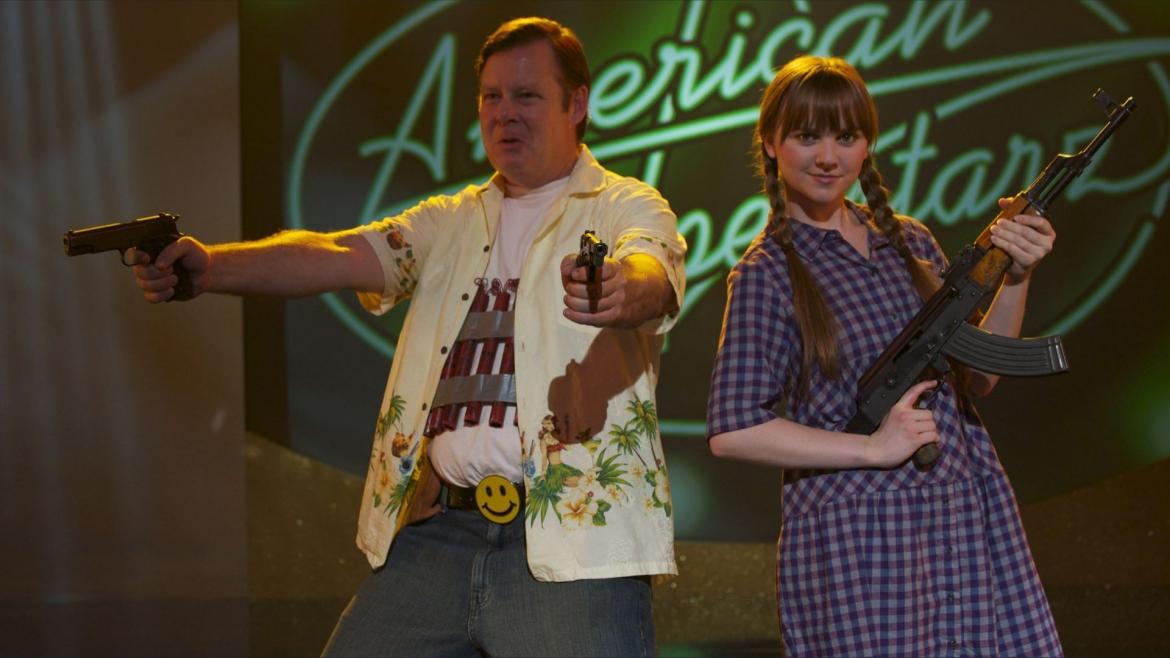 If you were to travel back in time to the mid 1980's and ask tell anyone that would listen that the squeaky voiced cop who twitched more than a bag of kitten poked with a cattle prod would become a leading independent film director that specialized in satirizing the American dream, odds are you would have received more than a few funny looks. If you were wise you also bought stock in Apple, but that's another discussion for another day. Bobcat Goldhwait found a second career behind the camera and has crafted biting, perversely funny social commentaries that often turns a baleful eye and celebrity worship and the average schmoe's desire for quick and easy fame. If nothing else, his previous film “World's Greatest Dad” served a reminder that Robin Williams can knock a performance out of the park when you ask to him to dial down the histrionics and not snort a mountain high pile of blow. His latest film “God Bless America” takes a bleakly comic look at the vapid world of reality television.

Joel Murray stars as Frank, a middle aged divorced father that has seen his best years pass by an watches with befuddlement a pop culture obsessed society that rewards shallowness and selfishness while looking down on anyone longing for stimulating conversation that stimulates and challenges its participants. He receives a one-two whammy of losing his job due to spineless maneuvering of his PC corporate overlords and learning he has an inoperable brain tumor. Distraught, he sits at the end of his couch with a gun in his mouth, needing only a few pounds of pressure on his trigger finger to end his sad, lonely existence.

The shrill, piercing screaming coming from his television distracts Frank form his task at hand. The sounds are coming from the mouth of Chloe, a sixteen year old little rich girl that was born on third base and feels she should be congratulated for hitting a triple. She's the star of a reality show where her worst crisis consists of not getting a brand spanking Land Rover for her birthday. Chloe's spoiled, entitled whiny demeanor provide Frank with a purpose. He must kill Chloe.

Frank finds his target and executes her in hilarious, if unexpected fashion. While doing so he catches the approving eye of the foul mouthed, hyperactive teenage Roxy (Tara Lynn Barr). After joining up with Frank she convinces him that there's a whole world of Chloe's out there that could use the kind of attitude adjustment only a bullet can bring.

“God Bless America” contains wall to wall wish fulfillment for its attended audience. Frank and Roxy train their guns on the most annoying members of society. Everyone from a bile spewing conservative talk show host to jackasses that treat movie theaters like their own personal meeting room meet with Frank and Roxy's wrath. While Roxy drafts a fairly indiscriminate list of people she would off (including folks that high five), Frank has one no-no on his list: “meanness”. Goldhwait isn't calling for a movement towards the left, he's simply pleading a case for a return to civility.

The biggest issue with “God Bless America” is Goldhwait's social commentary is too on the nose. His core audience is one that's already on board with the sentiment that this country is swiftly traveling down a piss hole due to a cultural war on intellectualism. The closest the film comes to nuanced commentary comes in the form of an American Idol reject that's trotted out on stage and in front of cameras for a weekly dose of humiliation. By the time Frank kicked off a third diatribe condemning the meanness and stupidity permeating American culture, even as a staunch left wing “let the gay whales marry” type I wished he would shut his yap.

At it's best “God Bless America” paints a bleakly hysterical look at our ADD culture. Joel Murray delivers a gangbuster performance as the sad sack Frank. Instead of taking his terminal diagnosis as a death sentence, Murray plays the part as someone handed a temporary pass to avenge every slight heaped on a life led in a most ordinary fashion. Goldhwait displays an uncanny knack in crystallizing all the aspects of pop culture that gnaw at a rational thinker and delivers a concise evisceration of the bottom feeders.