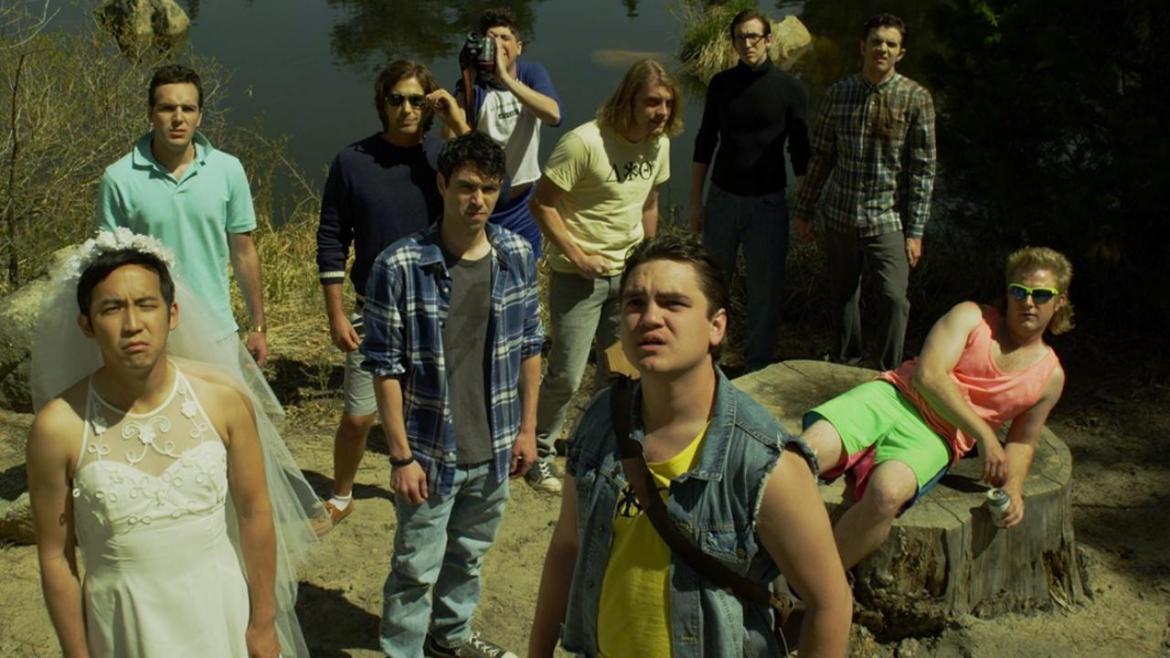 When you pick a film with a name like Dude Bro Party Massacre III, you likely have an idea of what you’re getting yourself into. There will certainly be lots of guys running around calling each other “bro”, there will be nudity, and there will likely be gore. Once you find out that this movie is a campy send up of 80’s slashers, and it features Patton Oswalt, you might find a picture of what to expect coming together even more firmly in your head. When you see that this movie currenty has a 100% critic score and an 80% audience score on Rotten Tomatoes, you’re sold. This all represents the slow climb up the first hill of what will prove to be quite a roller coaster; anticipation building to the moment the movie begins, and then things rapidly go downhill.

The “third” movie in a nonexistent trilogy, Dude Bro Party Massacre III begins with a montage that serves to catch the viewer up on the story so far. In a session with the school psychologist, a young frat bro named Brock describes not one, but two massacres wherein a killer named Mother Face ravaged his fraternity. This opening scene is pretty well executed. What serves as our “Previously on Dude Bro Party Massacre” segment is full of absurd kills as well as some very direct allusions to classic horror movies. Hope are still high, and the metaphorical roller coaster crests the hill.

Things quickly take a turn however. As Brock  lounges Freudian style on a couch, with his back conveniently turned toward the therapist, she approaches him from behind and slits his throat with a pair of scissors. And just like that we know the killer’s identity and motive, and the downward slope has begun. The remainder of the movie follows Brock’s identical twin brother, Brent, who has decided to rush the seemingly doomed fraternity in order to solve his brother’s murder. This plot line presents us with a gaggle of side characters to later be offered up as fodder for Mother Face’s killing spree.

The remainder of the movie is so dizzying and disorienting that it’s hard to keep track of what’s going on and whether the movie is good or bad. There are certainly great elements to the movie, from an Andrew W.K. cameo and some unique and bonkers kills, but the cartilage that holds it all together could not be weaker.

Now, I know that seeking to critique a movie that was made to be campy and over the top can be quite an undertaking. Some may argue that to critique a movie like this or hold to any kind of standard would be to miss the point, but I have to argue that this movie should at the very least least be able to stand up to comparison against other indie, low-budget, horror comedies, and I would argue that within that category it is not the best version of what it seems to be shooting for.

Dude Bro Party Massacre III may well be a good option for a group of people looking to watch something totally off the wall and crazy, but I would recommend that you temper your expectations. If you are looking for an intelligent or knowing spoof on the genre, I would encourage you to consider other options. But ss long as you know you’re in for a bumpy ride, this movie might just be up your alley.