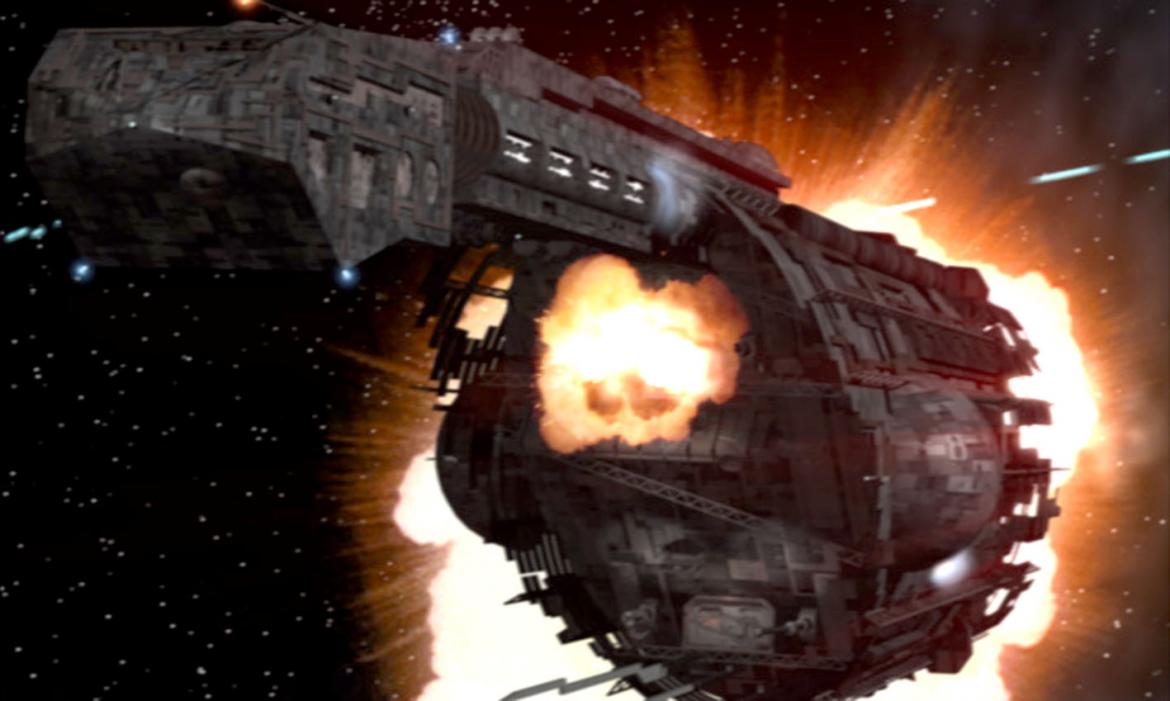 A group of futuristic space mercenaries take on a risky mission transporting a dangerous convict through deep space. In transit they are attacked by a mysterious group of fighter ships and are forced to evacuate. Forced to crash land on “the Planet,” the soldiers set in to survival mode in hopes that somebody will soon notice they’re missing and come looking for them. In the meantime Mr. Convict is loose on the planet and soon, our mercs learn that there is more going on than they originally thought in the sandy hills surrounding their camp.

The video stores are rife with independent horror flicks these days but indie sci-fi is far rarer of a commodity; so you can imagine that my curiosity was piqued when “The Planet” crossed my desk. I had hopes of an epic story packed with high tech wiz bangs and lots of laser blasts. In the end I got hints towards most of my hopes and a lot of muddled confusion on top of that.

I usually won't knock a movie for having a low budget. There’s a certain mystique behind the low budget feature that’s shot on a handy cam and the hard work put in by the film makers. They’re showing their love of the genre, the art form, and to put something together that’s feature length and packed with CGI graphics, well they’ve got heart. I’ll give them that. The problem comes though when there is so much CGI threaded throughout the movie, some of it so bad that it’s distracting, it begins to take away from the end product.

In “The Planet”, they make heavy use of CGI; 3D space maps, high flying space fighters, and flames. The majority appear to come straight out of a mid 2000’s PC game, but over all they were handled well and added to the atmosphere. (Except for the flames, they were bizarre!) Some of the imagery was down right nice; there are many external shots of the planet to drive home the fact of just how isolated these guys were. Which is all well and good except for the fact that this movie is only 1 hour and 9 minutes long… and the external planet shots make up at least a third of the movie; I understand the need for filler, but come on, guys.

With the CGI aside coming across a tad distracting and a bit hokey, we then turn to the story itself to help keep the movie interesting, and in that “The Planet” fails. With a high potential for a good old fashioned epic space adventure, the movie becomes disappointing as we get the story in short disjointed bursts in between external shots of the planet from space. This in itself could be forgettable but many of these short bursts are wasted on scenes of soldiers setting up tents, soldiers standing about posing while shooting laser guns, and some bald skinny dude stumbling about the desert.

It’s apparent what they were aiming for; they wanted character driven dialog to convey the story, the back story, and the over all plot. Commendable surely, but when there is no cohesive flow to the plot it becomes a jumbled mess. It doesn’t help that their acting talent is mostly a bunch of new actors who lack the skill to convey any sense of excitement, fear, or…emotion. When the camp was first attacked by invisible baddies immune to their laser guns, the majority of the mercenaries looked rather bored, aside from the mulleted Scotsman who swore a lot. The only truly memorable role in the movie was that of the captain played by Mike Mitchell, and he was only memorable as he ran around sleeveless the entire time to show off his huge muscles while toting about the biggest gun. (That did no more damage than the rest of the guns.)

What could have made for a fun little action sci-fi romp unfortunately culminated in nothing more than a jumbled and confusing mess. In fact, by the time the big finale came about, I had no clue what the hell was happening; all I knew was that some how we made a turn from a ‘planet that was a doorway to a new universe’ to ‘a big ass monster’ in a matter of seconds. And I really don’t know how, or why.

“The Planet” gets kudos for the effort to put together such a grand vision, but ultimately this one fails to be interesting or vaguely entertaining which is sad because they kept me there for at least half the flick. I just wish they would have followed it through until the end.