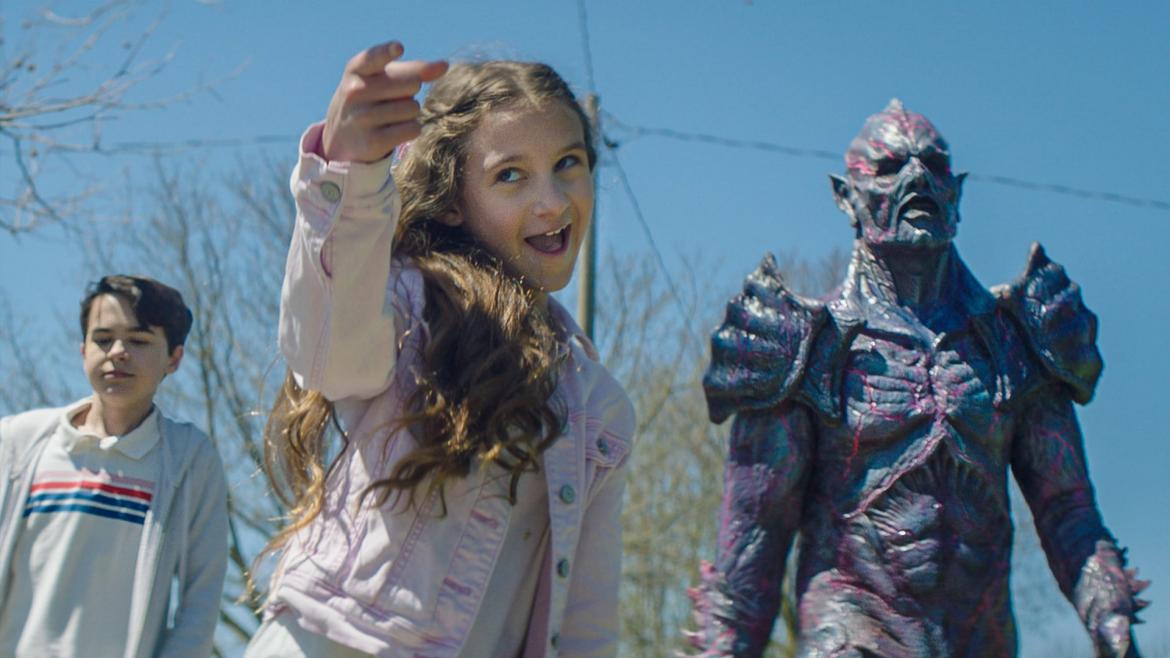 What happens when you give a young and spirited girl the keys to an inter-galactic killing machine? You get Psycho Goreman, or PG for short, a movie that had it been released during my adolescence, would have been the talk of the lunch table. While the title promises a film brimming with goo, writer/director Steven Kostanski (The Void, Father’s Day) also crafts a potent emotional relationship to counterbalance the bloody bedlam.

Mimi (Nita-Josee Hanna) and her brother Luke (Owen Myre) awaken a long dormant intergalactic alien force imprisoned on Earth for its attempts to destroy the entire universe. Mimi has recently come into possession of the alien’s powerful gem which allows her to command the creature. Now in control of the extraterrestrial, she bestows him with the moniker of “Psycho Goreman” due to his love of descriptive, violent deaths. However, PG is not amused by the tedious tasks he is asked to perform, some of which have hilariously violent ramifications, especially when the alien race that imprisoned him intends to return to Earth and destroy him forever.

Let’s be honest, Psycho Goreman is a silly, silly movie. But, that of course is the point here. The various depicted alien species are essentially portrayed—both in look and personality—like they were transported to set from the 90’s Power Rangers. In fact, much of this feels like a marriage of an Amblin adventure, Power Rangers villain cheesiness, and death metal inspired practical effects gore.

Kostanski knows that this is not high art, but the fun he’s clearly having behind the camera is translated perfectly on screen and it’s an absolute blast that makes room for a game of intergalactic dodgeball. To give you a degree to the silliness on display, early on Luke and Mimi’s friend Alastair (Scout Flint) is transformed by PG into a giant brain blob with tentacles, which he remains for the entirety of the movie, in public at times, with no one batting an eye. Kostanski crafts a tone of nonchalant, playful humor that remains effective throughout the film.

Cheesiness aside, Psycho Goreman brings the gore in buckets—often while incorporating its light-hearted humor. Still, the film’s playfulness doesn’t distract from some pretty gnarly and at times disturbing practical effects. PG often refers to his kind seeking a “warrior’s death” which is the act of devouring one’s enemy. The first time this action takes place is gloriously staged and is hilariously capped off. Kostanski’s script knows precisely how to play up the outrageous humor even in the film’s most heightened moments.

As a necessary counterpoint to the absurdity, Mimi and Luke’s relationship anchors the film’s emotional arc. At face value it’s your typical contentious brother/sister dynamic with Mimi taking the alpha role while Luke sometimes feels unappreciated and belittled. Their dynamic fuels PG’s attempts to retrieve the gem, but also potentially diverts his singular focus on killing everything that crosses his path. Kostanski doesn’t bludgeon the audience relentlessly with the emotional goals of the script, but the relationship accomplishes some warm-fuzzies in a unique and exuberant fashion.

Psycho Goreman hardly fits the bill for those seeking high art within the genre, but it happily gives a body splitting wedgie to all the snooty movie nerds turning their nose in its direction. Kostanski’s gleefully violent, but surprisingly heartfelt adventure is precisely the kind of jovial chaos we needed in these tumultuous time.