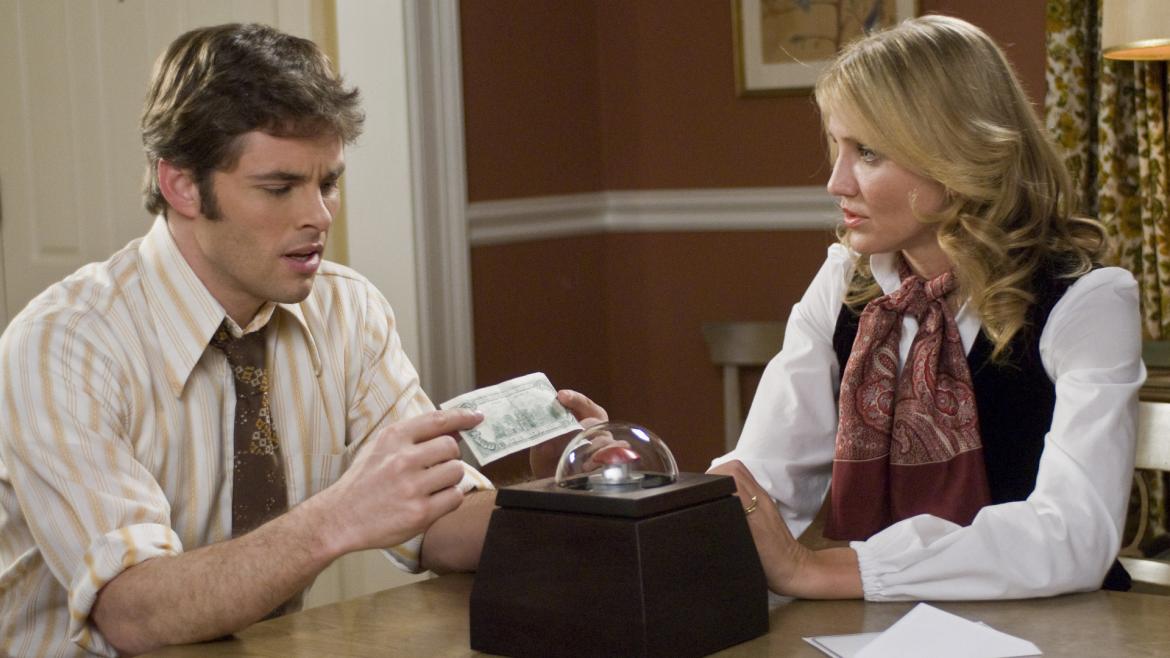 The minds of Richard Matheson and Richard Kelly collide with Cameron Diaz's terrible southern accent in the sci-fi thriller, The Box. Kelly, who brought us the cult classic Donnie Darko dips into the weird well a little too early and a little too often in this twisty morality tale. Diaz stars alongside James Marsden as a money strapped married couple who are visited by a stranger with hideous facial scars (Frank Langella) who presents them with a box and inside the box lays a button. The concept is simple, press the button and immediately be presented with $1,000,000.00 cash, but someone somewhere that they don't know will simultaneously die- or don't press the button and the offer will be revoked after 24 hours and presented to someone else.

With a movie like this, based off Matheson's short story "Button, Button" the problem lies in stretching the concept into a full-length feature. Kelly manages to do so in mixed fashion. Marsden is a tremendously underrated talent who is constantly mis-cast in loathesome romantic comedies and other chick flicks who carries the vast majority of The Box on his shoulders- made all the more evident every time we are subjected to Cameron Diaz cartoonish southern accent. Kelly's script gives each moments to take over the emotions on screen, but the tone is constantly shifting between the emotional core of the story and the relentless weirdness of the science fiction mixed within.

There's a mystery that slowly unravels itself- what is this box, where did it come from, and what is the ultimate purpose. Nuggets of pertinent info is info dumped at several of the film's checkpoints, some of them forcefully so. The film's strength lies in the mysterious charm of Frank Langella's character which is also at times menacing. However, like Langella's unfortunate scars (used to great effect throughout) the film's mystery is missing chunks of skin leaving it a little disfigured. Intriguing as it is, the film's over serious tone is often derailed by hokey acting and refusal to let off the gas a bit when the weirdness starts spiraling out of control.

Richard Kelly is able to create an immensly creepy atmosphere that builds on the dread with a pretty great score that sometimes ventures into old school sci-fi. The time period setting also lends to the dated aesthetic Kelly has skillfully crafted. In the end The Box isn't quite destined for the cult status of Donnie Darko, but the film will certainly have a niche audience willing to engage it's bizarre temperament.