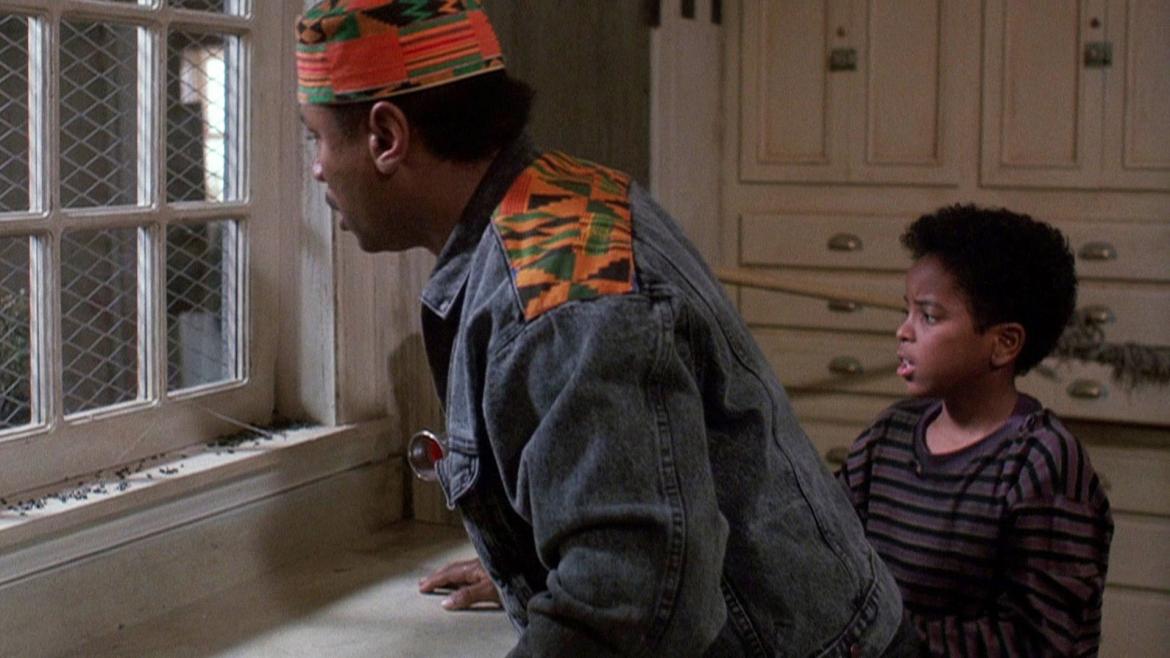 The People Under the Stairs (Movie Review)

With the death of Wes Craven, the world of horror lost a great mythmaker. There’s no better time to reflect on one of his richest stories, an underrated movie that took several years to attract the admiration it deserves.

The People Under the Stairs takes no pains to conceal its homage to legend and fairy tale. It opens, as many of those stories do, with an inexperienced but brave hero beginning a journey to save his family. The hero in question is a boy named Poindexter, but he’s known to his loved ones as “Fool” (Brandon Quintin Adams). His older, Tarot-reading sister assures him this affectionate nickname is no slight: fools are pushed into danger and forced into a decision--take the easy way out, or fight through it and come out triumphant. He finds himself in exactly that position when his dying mother is unable to make rent and their landlords threaten eviction.

Their landlords are notoriously villainous: credited only as “Man” and “Woman” (Everett McGill and Wendy Robie), they have spent years building an elaborate empire of slums, edging out tenants so that they can sell the land to commercial developers. There are rumors that all of their wealth is hoarded somewhere in their giant home, and Fool’s quest begins when he joins his uncle Leroy (Ving Rhames) and his uncle’s friend Spencer to reclaim what their community lost. It takes some effort to get inside, but once they are there they discover, to their terror, that the house is rigged so that its inhabitants can never escape. In addition to their own daughter, Alice (A.J. Langer), the Man and the Woman have accumulated dozens of pale, tongueless victims in their cellar--and their crawlspaces--and everyone is desperate to leave.

The film’s best element is the house itself: an artificial symbol of “security” that has been weaponized, designed to starve a community and entrap anyone who threatens its owners’ stranglehold. As a set it is sprawling and deadly, and scene after scene finds Fool and Alice stumbling through rotting floors and dusty hidden passages as they are pursued by their gruesome captors. McGill is plenty creepy as an unhinged, gun wielding maniac who cheers like a cowboy and inexplicably dons S&M gear, but Robie steals the show, channeling Joan Crawford and Norman Bates’s mother as she hunts down children.

The movie is relentlessly dedicated to exploring the deep history of storytelling, from folklore to grindhouses, and putting familiar elements to new use. It’s also shrewdly conscious of race, gender, and economics: more than just ‘flipping the script’ in terms of casting, Craven is aware here that he’s telling a bigger, often unheard story about violence and oppression in America. One great example is a scene that pays shot-for-shot homage to the famous bathroom sequence in The Shining: only now it is Fool, a black child, in place of Shelley Duvall, crouching in the corner while his pursuers unleash their trained dog on the splintering door.

A revenge fantasy that can be light on revenge (but only for a while), The People Under the Stairs may leave some horror fans wanting a little bit more. With the cast slimmed down for much of the movie to two heroes and two villains, no one is expendable, yet: the succession of injuries, though creative, loses a little suspense. But the finale is a spectacular payoff to the story that preceded it. Arthurian hero cycles, Kubrick and Hitchcock, grotesque mothers, haunted houses, home invasions, gold-hoarding monsters, and the brutal history of racist violence and gentrification: you would think, as the movie gets fuller and fuller, that at some point Craven would trip over his own feet. But The People Under the Stairs never stumbles: it explodes.