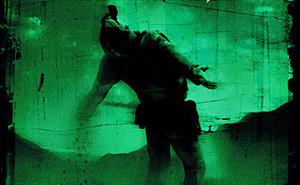 In a Q and A after the world premier of his latest film yesterday, an audience member asked director Daniel Myrick if there was a reason that he continued to shoot lower-budget films instead of trying to step up financially. His response resonated a great deal with both the strengths and weaknesses of "The Objective", which had just screened in front of a packed Tribeca Film Festival audience. Standing in front of the screen with most of the film's cast as well as some of the crew, Myrick explained that he wanted to remain in control of his own filmmaking. By keeping his budgets reasonable he ensured that the suits wouldn't be showing up on set making demands.

This is a valid and even admirable way for a director to continue making the films that he wants to make, but the checks and balances that come with working in the studio system are not all bad. With more money comes more accountability for directors and more oversight from producers, but it also brings better actors and higher quality special effects. Of course name actors and expensive special effects don't equal success, Myrick proved that on his very first time out, but bad acting and mediocre effects can mean failure, and "The Objective" while far from a total mess, would have benefited greatly from both of these elements.

With new intel that reveals a strong radioactive presence in the hills of Afghanistan, CIA agent Keynes (Jonas Ball) sets out on a mission in the days after the 9/11 attacks. He's joined by an elite team of soldiers who are to assist him in any way possible, but are kept in the dark about their ultimate destination. After taking on a local guide, the group sets out on a journey that often resembles Captain Willard's search for the elusive and destructive Col. Kurtz.

Keynes and company travel deeper into the hills of Afghanistan, and not too long after do strange things begin to happen. A deadly firefight leaves no enemy bodies. Strange lights appear to travel toward the men but then fly off into the sky. Water, taken from a subterranean well, turns to sand in their canteens. The journey also begins to take a literal toll on the crew, and as their numbers dwindle, the tension between the military commander and the CIA "spook" who's giving orders escalates.

From its outset, "The Objective" builds a quiet, brooding sense of claustrophobia. The soldiers wander the vast wasteland of the Afghani desert, but everything — their surroundings, the environment, any individual they encounter — represents a potential threat. As they draw closer to their destination, the nature of that threat shifts, and it is in this shift that the film begins to come off the rails.

As a barstool napkin scribbling, "The Objective" is unassailable: an elite military team goes up against an unknown force in a remote and dangerous part of the world. Fleshing out the film's supernatural elements proves much trickier. As it draws to an end, Keynes's journey becomes less "Apocalypse Now" and more "Close Encounters of the Third Kind". That's not to say that little green men make an appearance, indeed Myrick leaves a great deal to the viewer's imagination, but the film does shift its focus to a conflict between reason and belief; a conflict of pressing forward into the unknown or retreating to safety and ignorance. This shift unfortunately undermines a great deal of the earlier tension, while at the same time doing little to explain the strange occurrences that have plagued the team.

The audience's experience is mediated almost entirely by voiceover from Keynes, a narrative tactic Myrick borrowed almost unchanged from Francis Ford Coppola's "Heart of Darkness" retelling. While the device helps to get a great deal of exposition out of the way, and also establishes a rift between Keynes's stated intentions to the team and his actual intentions, it begins to work against the experience of the viewer as the story unfolds. Keynes's personal monologue does little to inform the setting or the mood, that is done quite capably by the visuals, so instead it distracts from the action with overwrought commentary.

Myrick's desire to work on his own, writing and shooting ideas that he's generated, makes a great deal of sense. His early success gave him the flexibility and the confidence to follow his own artistic inclinations. It would have been interesting to see how "The Objective" could have turned out though, with more juice behind it. Ball, whose asked to carry the film for stretches, is solid, but unspectacular. The actors comprising the military team, who were excellent at times, began to show their thespian limits when pushed to extremes. Similarly, special effects that are passable in small doses eventually hurt the film's aesthetic when revealed in the full light of day. Perhaps no scene suffers worse from this detriment than the climax, a place where it can be least afforded.

Far from perfect, "The Objective" has its merits. Myrick latched onto an idea and took it to its conclusion. While the film aimed high, it's unclear whether it ever really had a chance. Like Myrick's three preceding films, "The Objective" is unlikely to get a theatrical release, but that might be for the best. This is the type of film that even in failing offers a great deal for audiences to chew on. If it can find the right crowd, "The Objective" could one day enjoy a favorable cult status.