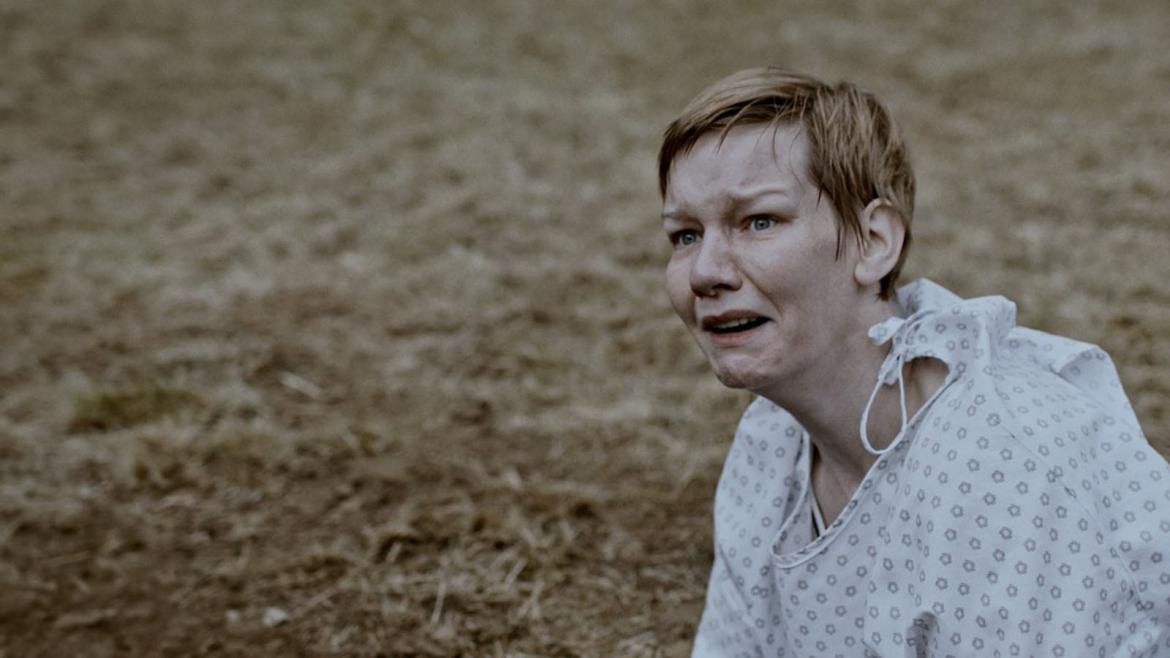 Michael Venus’s Sleep is a movie that layers reality and dreams, the past and the present, and secrets & lies in order to lay out a story of intergenerational trauma surrounding a strange hotel in a small German village. Like a lot of mystery box movies, though, opening the box is much more fun than finding out what’s actually inside.

Marlene (Sandra Hüller) has a drawer full of notebooks containing sketches she’s made from the recurring nightmares she suffers every time she attempts to sleep. Her daughter, Mona (Gro Swantje Kohlhof), wants her to seek professional help, but Marlene has a different plan: she’s found an advertisement with a photograph of the hotel that she’s been dreaming about and unbeknownst to Mona, she heads to the hotel to find some answers. Shortly, Mona receives the news that her mother has been hospitalized in a kind of waking coma state after undergoing some kind of trauma at the hotel. Mona travels to the town to care for her mother and to attempt to find the connection between the hotel and Marlene.

The first half of Sleep recalls both the haunted hotel setting of The Shining (Kubrick, 1980) and the alternately welcoming and menacing community of Midsommar (Aster, 2019) as Mona investigates the hotel and meets the strange occupants of the village. It’s exciting stuff as she glimpses the ghosts of the hotel’s dark past and tries to use the strange drawings and notes from her mother’s dream journals in an attempt to put the pieces together about why this place has been haunting her mother. As she conducts her investigation, she also begins having dream episodes of her own until the border between dream and reality becomes increasingly unclear.

In the second half, as questions give way to answers and threads begin getting tied up, the movie starts to become unwieldy and confusing under the weight of the various mysteries and timelines and overlapping dreams. Much like a dream, characters appear with little explanation as to who they are and other characters, who seemed significant, fade out of the movie. There are scenes that flip through different dream settings so quickly that it becomes incredibly difficult to keep track of what’s happening, if we’re seeing a dream or reality, and what various characters are even trying to accomplish. At a certain point everything becomes so convoluted that the subtext about Germans dealing with the sins of the past actually becomes more clear and easier to grasp than the surface text of the story being told.

Like an actual dream, Sleep is often hard to follow and at times slips into a near stream of consciousness mode. The story more or less does add up, but it asks a lot of the viewer and makes for a fairly exhausting watch. A few extra lifelines and additional exposition would go a long way to reducing the frustration of trying to follow such a labyrinthine story, and could potentially make the brain-bending second half as enjoyable as the stellar first half.