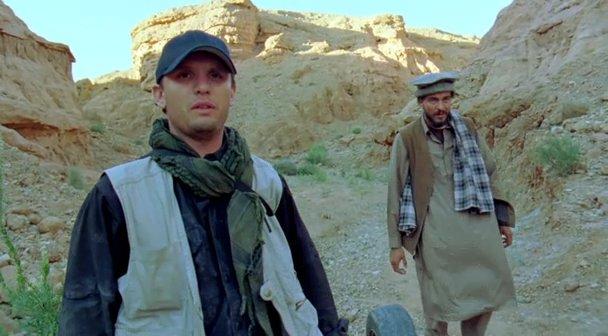 Over the course of "Blair Witch Project" co-director Daniel Myrick's spiffy 2009 sci-fi thriller "The Objective," I unearthed two very important, rarely discussed truths. The first, of course, is that Myrick has yet to recapture the magic of his iconic feature-length debut, a task that teeters, in my opinion, on the brink of impossibility. There were several memorable moments in the film that came dangerously close to covering me with goosebumps, though each of these scenes is hampered by Myrick's desire to keep the majority of the story's secrets in the dark. I'm all for abolishing pointless exposition and needless hand-holding, but giving the audience something to chew on every once in a while certainly makes for a smoother, less confusing cinematic journey.

The second truth isn't really much of a truth, per say, but more of an unscheduled personal examination of my thoughts regarding military-based horror films. Simply put: I thoroughly enjoy watching well-trained, heavily-armed soldiers duke it out with otherworldly forces that operate outside the confines of modern warfare. "The Objective," while not the greatest example of the subgenre in motion, is an effective, well-directed effort that intelligently portrays our nation's finest in an increasingly fantastical situation that slowly spiral out of control. Had the film opted for something a bit more simplistic and rudimentary, the whole thing would have immediately fallen apart.

Here's the setup: A group of rock-hard military types, under the command of a shady, tight-lipped CIA agent (Jonas Ball), venture deep into Taliban country to record a statement from a spiritual leader whose blessing could help turn the tide of the United States' war in Afghanistan. As their travels become more and more perilous, the soldiers begin to realize that something strange and unusual is transpiring all around them. Mysterious lights, invisible helicopters, and vanishing bodies point to something not of this earth, though their straight-laced leader assures them that everything is a-okay. What follows is a haunting, frequently frightening foray into the realm of intellectual science fiction.

That's not to say that Myrick's script -- which was co-written by Mark Patton and Wesley Clark -- is a flawless, air-tight masterpiece. On the contrary, the same scenario has been tackled in a bevy of stronger films, namely Paul W.S. Anderson's "Event Horizon," and Myrick's own "The Blair Witch Project," a picture he co-directed with "Altered" helmer Eduardo Sanchez. Additionally, the "The Objective" is a bit bottom-heavy, as most of the film's stronger thrills are contained towards the tail end of the feature. Spreading the terror evenly would have helped smooth out a few of the bumpier moments and, possibly, prevented the movie from sagging in the middle.

In fact, what keeps the production from imploding altogether is its rich stable of likeable characters, powered by an intrepid cast of veteran players. Making this sort of high-concept malarkey work depends greatly upon the collective talent of its cast, and Myrick has done an excellent job of assembling a gaggle of individuals who know how to properly humanize this sort of outrageous material. And while everyone contributes greatly to the picture's overall success, its Jonas Ball and stuntman extraordinaire Matthew Anderson who seal the proverbial deal. They are the glue that keeps this pieces from fragmenting, especially once events begin to escalate in the final act.

“The Objective” is the sort of tense, deliberately paced genre film I’d love to see unfold across my television screen more often. That said, the feature is not without its problems, many of which may offend those who are craving a more traditional, fast-paced science fiction-inspired outing, the kind filled to overflowing with gore, one-liners, and gratuitous debauchery. The last image in the film is something you’ll want to ponder for a while, and its meaning is certainly up for debate. If you were never a fan of “The Blair Witch Project” and aren’t spooked in the least by the power of suggestion, “The Objective” isn’t going to impress you at all. The rest of us, however, will have plenty to think about.