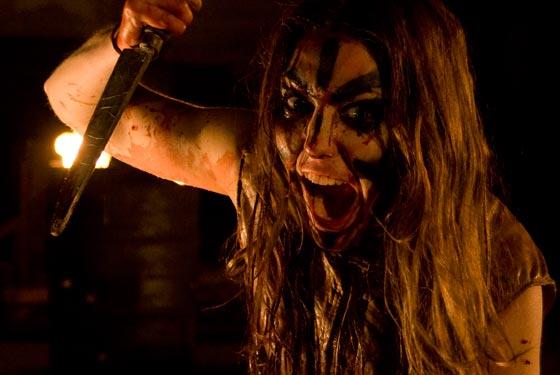 Human civilization as we know it is coming to an end. Humanity is dying off, and our formally highly populated cities are being evacuated. Some however have chosen to hang back and start a new life, a new civilization. Such is the case with Darwin, a mild mannered professor with his own plans to rebuild society. Together with his small group of hand picked ‘useful’ survivors, they’ve laid claim to an empty hospital to start their new community. All is peachy keen until the the arrival of the Rovers. The Rovers have their own plans for a new society, one that involves feeding on other humans to get the meat that they so love.

Man, a post-apocalyptic flick starring Vinnie Jones, Louis Skulnick (Robert Carridine), and Michael Madsen? Sign me up, this shit’s gotta be off the hook! At least that’s what I was hoping for as I approached the DVD player. What I got in the end amounted to mixed emotions, and a fairly entertaining experience.

"Tooth and Nail" has some great elements to it. The story is interesting and engaging and poses a new twist on the end of the world scenario. As a matter of fact, they tell you exactly that at the beginning of the movie. As engaging as this story is, there are some pretty major holes that I struggled with despite the fact that they at least tried to fill them.

That is to say, they were at least aware of their issues and made the effort to patch them up. Still, I’m a sucker for anything taking place at the end of days so it was fairly easy for me to brush these off and move on. There are some other interesting tidbits here, such as the unexplained fact that everybody has dropped their normal monikers and adopted car names. With out trying to spoil too much, the fall of mankind involved gasoline which in turn ignited world wide panic. There’s a little something to be said about our culture and its worship of the automobile, etc. by insinuating that everybody would adopt car names in their absence.

There is a strong sense here that "Tooth and Nail" wants more than anything to be the second coming of "Mad Max". With the Rover's shabby looking costumes of mixed pieces of leather, fur, and chain mail, they try for the ’savage warrior’ look but manage to mainly look like rodeo clowns. Michael Madsen’s wearing chaps for Christ sake. Despite their silliness, the director throws in some other tidbits to flesh them out. You get a decent back story on their origins, you catch glimpses of their use of old fashioned horn commands to direct the troops, and they managed to unleash some pretty decent violence as well. Thankfully, none of them have mohawks, or chains on their faces! Overall, a decent bad guy to have in this setting, if a little over the top.

The biggest fault lying within "Tooth and Nail" is that they fail to use the big names they have on hand to their full potential. We have Vinnie Jones and Michael Madsen as bad guys. You don’t get much better luck than that for genre flicks. Do we get long loving scenes of these two experts doing their madman schtick? Unfortunately, no; both have brief cameos leaving the viewer wishing for more. Robert Carridine however does have a beefier part in the role of Darwin, the professor starting the commune of survivors, which he handles well.

The character is believable with a touch of menace as you sense that he may have grander plans that do not necessarily include the other survivors. There are some interesting dynamics going on in this group; Dakota is sleeping with Darwin which causes issues with the others. They voice their ill wills and complaints to Dakota in hopes they get back to Darwin. It’s slightly complex, just enough to help flesh out the characters. Otherwise, the acting was decent enough to pass although at times it was a bit over the top. The biggest culprit? Nicole Duport; while the tension was high, the action rolling, she was spot on and solid. When it came time to slow down for the drama however, she became ham handed and lost some of her magic.

There were a few other minor flourishes that caught my eye here. For one, the sound work on this flick was pretty damn good. There is a scene late in the movie showing a Rover filing his teeth into points. The sound was so tight on this it made every hair on my body stand on end. The grating sound was so real I could feel it in the roots of my teeth! As well, while the gore was light, the kills were at least interesting. Many times they would attack the spine of their victims to disable them, keeping the meat fresh for longer. Smart thinking and a minute detail that stood out.

On the other end of the spectrum, there were two totally useless sex scenes packed in here that really made no sense. I love sex scenes as much as the next guy; they just weren’t needed here and added zero to the story as a whole. And finally, there is a moment where "Tooth and Nail" totally jumps the shark, and it’s in the final ten minutes of film. As Dakota prepares to enact her revenge on the Rovers, we get a long and drawn out scene of her in a bathroom. Just when you think she’s got her self psyched up, she busts out the war paint and starts to paint her face. I shit you not. From there, you can’t help but snicker the entire time as this young girl with tiger stripes painted on her face lays waste to a room full of punks. Totally killed what mood they had built! At least she looked pretty hot while doing it.

"Tooth and Nail’"is an interesting flick with good values, yet there are still some issues that cause it to flounder slightly. Regardless, if you’re a fan of the post-apocalyptic it’s just different enough to make it fresh; slower paced, less frenetic, and a different twist on the end of the world. It’s worth a watch for Vinnie and Madsen’s short stints as well as a story you don’t hear every day.