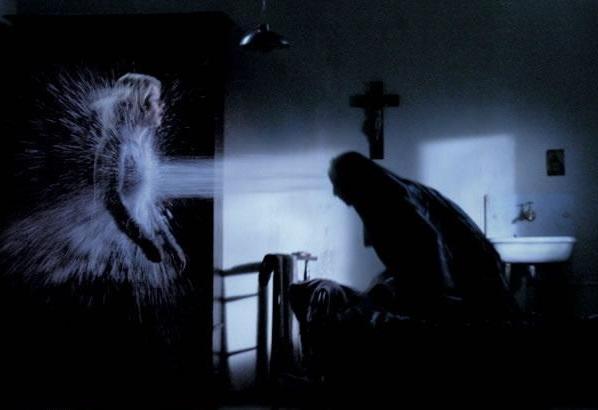 In what we must assume is the past, a group of girls at a catholic boarding school bond in friendship and orneriness. They're all free spirited 'bad girls' and grate against the sensibilities of the sisters that run the school. Sister Ursula is their nemesis; she's strict and holds to the old school rules of hard punishment which the girls see as cruel and unusual. Eventually they have all they can take and so they decide to take action; bad things happen, the sister dies and the girls hide her body.

Cut to the future:

The girls are all grown up, living their lives, trying their best to forget the events of boarding school. As Mary's daughter Eve goes to the school formal, Mary is visited by a wet and ghostly visage. She's also met with a grisly demise. The girls of boarding school's past are meeting a grisly end one by one. Led by not knowing about her mothers past and catching a fleeting glimpse of the ghost, Eve is now hell bent on tracking down her mother's old friends to puzzle it all out.

If you're reading the plot summary of 2005's "The Nun" and thinking that it sounds vague and rather slow, you are not far off the mark. A movie with grand ideas, but unfortunately the execution falls flat. Playing heavily on Japanese horror influences such as "The Ring", the movie tries to be slow and psychological. Due to various plot holes, annoying acting and a general lack of anything interesting, it only manages to play to the slow side of their dreams.

The largest problem that "The Nun" faces is the filmmakers' assumption that we the viewer are privy to the same script that they are. Early on we catch glimpses of the past and the so-called terror inflicted on these girls by an evil nun. The film then proceeded to jump back and forth between time periods, both past and present, to let the entire story unfold throughout. Instead of being setup with a conviction to hate Sister Ursula as much as the girls of the private school once did, we are left trying to puzzle out what exactly she did to them throughout the entire film. Where if we could identify her horrible side earlier on, it would be easier to accept the ghostly nun with shark teeth that torments the cast later in the film. Instead, we face confusion.

Another fault the film has is that the actual back story fails to live up to the plot summary that gives way to the girl's motives and the ghost that shows up in the present time period. As the ghostly nun appears throughout, she is present in monstrous looking gray skin with razor sharp teeth. A gruesome site indeed, she possesses a demonic visage that hints towards many great convention breakers for a nun. This builds us up for a reveal of a dark side of this wayside Catholic boarding school, perhaps a story of a holy person tempted to the dark side, something satanic to counterbalance the good. No, instead as the story unfolds we come to realize that there is nothing evil to Sister Ursula whatsoever. She simply was strict to a group of ornery teen-aged girls and perhaps a bit jealous. There is nothing in the revealed back story or its combination with the present that explains the demonic visage of the nun as she arrives to kill each girl one by one. She's simply evil looking because she is a ghost.

"The Nun" is overwhelming boring by the time the credits roll, giving us an entirely unrewarding experience. Aside from lead actress Anita Briem, there simply is not a whole lot of effort being put into the roles. Where the slow psychological scares they were going for could have worked well had they explored what made Sister Ursula's ghost appear as she did with gray skin and razor sharp teeth, the tension could have worked well. Instead it is flat and unrewarding. While the film does contain some moderately entertaining kills without being too heavy on the gore; it just isn't enough to save this snoozer from the eject button.