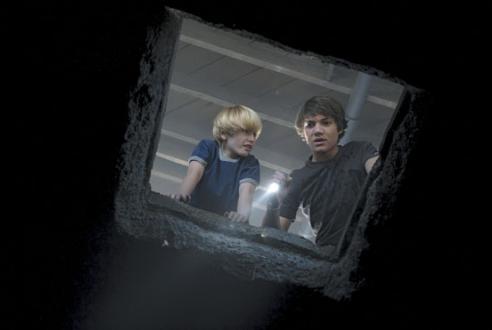 Joe Dante is a name synonymous with horror and horror comedy. His credits include such well received genre films like "Gremlins", "The 'Burbs", "Piranha" and "The Howling". The other common thread among this quartet? They're 80s movies (ok Piranha was '78, but you get my point). And with "The Hole" Dante seems to be right back in his comfort zone using elements that could've worked in just about any form over the past 35 years.

"The Hole" centers around the Thompson family. The seemingly nomadic trio of Dane (Chris Massoglia), Lucas (Nathan Gamble), and their mother Susan (Teri Polo) have just moved into a house in the small town of Bensonville wherever (approximately 2000 miles from Brooklyn, NY). It's unclear why they've relocated and as the movie's plot progresses, why they've relocated consistently in the past few years. Dane and Lucas are the pair of bickering brothers you'd expect in this sort of film. Older brother Dane is the angst ridden teenager while Lucas is the peppy, attention seeking younger brother. They're able to bond once perpetually bored neighbor Julie (Haley Bennett) is introduced to the fold to investigate the titular "Hole".

The rules involved with this otherworldly Hole are not quite concrete. It seems to summon the darkest fears of those who peer into its depths until they're able to conquer them, or be consumed by them. Though again, the rules are unclear. Both Dane and Lucas observe the fear of Julie outside of her presence completely, and Lucas becomes intertwined into Dane's fear completely. Regardless, it's the execution of the frightening moments that had me enjoying this otherwise uneven film. Plenty of practical effects are used to illuminate many aspects of the fears from all three, and the house's architecture is used to enhance the moments of terror helping to create a solid character out of the scenery.

Though no amount of special effects and solid scares can detract from the crippling nature of lead actor Chris Massoglia's performance. This movie was seemingly slated for a wide theatrical 3D release in 2009 and was buried until its current release on DVD and BluRay. But why exactly? Without digging for specifics I thoroughly believe the lead actor was a crippling element for this movie. Not sure how he was even cast in the feature to put it bluntly. He offers no charisma, no emotion, and though his character does arc he plays it so flat that it's as if nothing has ever happened. It's a massive failure of Dante's particularly when the rest of the cast was perfectly adequate for this feature.

I actually enjoyed myself while watching this film, but upon reflection its flaws are multifaceted. With a more consistent tone to match the thoroughly intense subject matter, a different lead actor, and a few script polishes this could've been a wonderfully enjoyable fright fest for the horror fans of all ages. As it stands, it's another enjoyable Dante misfire below his 80's peak.