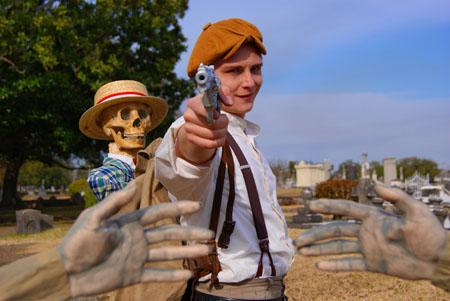 It takes a lot to tell an effective story. First you have to hook your viewer and earn their attention. Once you have it, you have to make sure not to lose it. Every detail, nuance and plot point needs to simultaneously tell the story you want to tell and continue to hold your viewers attention by making them want to find out what happens next. If you tell a story without any suspense, one that builds to nothing or meanders for just too long, it doesn’t matter how well the story is told, the viewer won’t care. It’s kind of unfortunate, but viewers are fickle, they hold their time precious and they’re quick to want to move on . Unfortunately for the makers of “The Night Shift”, despite being incredibly well made for a film with such a small budget, the plot is missing that hook, that driving element that will keep the viewer engaged, ultimately causing it to fall short of it’s potential.

“The Night Shift” was adapted from a short film of the same name, which winds up being it’s Achille’s Heel. Instead of feeling like a fully fleshed out, coherent narrative, “The Night Shift” feels like four half hour shorts that are awkwardly bolted together with minimal plot points holding the whole thing together. The film follows an undead groundskeeper at a cemetary named Rue Morgan (quick aside, amateur film-makers, hack pun names are never a good idea), whose job is to keep an eye out on the other undead residents. He also has a wise-cracking skeleton sidekick and a romantic interest in the mortal administrator of the cemetery. This serves as our loose framework for the rest of the film, with the first half hour essentially being setup and a quick plot-point about a demon that escapes from a tomb, the second half hour tackles Rue battling a werewolf and the final hour deals with Rue’s feud with another resident of the cemetary, a zombified Confederate general. The problem is, there’s nothing really linking any of this together outside of the characters and setting.

As a result, the pacing of “The Night Crew” is really disjointed with what feels like three separate expositions, climaxes and denouements. As such, the story hits snags around a half hour and an hour in, which is when things should be picking up. While this structure works well for anthology films, the quicker pace at which things build and resolve allows that structure to work. Here, the exposition and denouement is the majority of the film, which is incredibly laborious to sit through. The action barely rises at all, with most of the demon and werewolf stories being established and resolved in about five minutes, leaving most of the film to be exposition. Making it worse, there’s a lot of bloat in this film (it clocks in at just over two hours), so there’s A LOT of exposition, which really kills this film dead.

Which is unfortunate because there’s a lot of potential here. For being made on a microbudget, the film-makers were able to put together a very technically strong film. Where most of the films in this budget range I’ve watched look every bit as low budget as they are and are full of janky, obviously amateur moments, “The Night Shift” manages to stand out and look fairly professional. The cinematography is solid (for once a film like this has conversations that aren’t simply endless repetitions of shot/reverse-shot!), the editing seamless and un-noticeable (which is how it should be) and they disguise their effects budget pretty well. My hat’s off, this is easily the most professional film of this type that I’ve seen.

There were other decisions that really helped to benefit the film overall. The undead characters all act in the period in which they were alive, which gives the film an old-timey radio vibe which worked. It also made the amateur acting fit the film as it really jived with the over-the-top, dramatic nature of 1930’s radio broadcasts. It’s a great example of turning a potential weakness into a strength. Unfortunately, it also distances the viewer from any emotional connections to the characters, which may have exacerbated the plot issues, though I imagine that could have been worked around in the script.

With “The Night Shift” existing in two forms, one short and one feature, the film-makers have really shown that they have the potential to create a well made film. Unfortunately, their story-telling isn’t yet up to that same level, causing the feature length version of this to be a pretty painful viewing. Given the aptitude they’ve displayed on the technical side however, I’d be willing to bet that there’s a happy medium here and that somewhere in their brains they have a tight, enjoyable hour and a half long film floating around. With what I’ve seen with this film, while I wouldn’t recommend this to anyone, I would definitely give them a second shot with a future project. And that’s a first time I’ve said that walking away from a film like this.