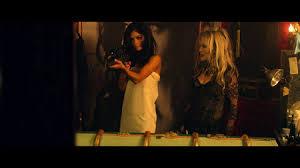 Imagine a cross between “Mad Max” and “Sin City,” but sprinkled with a pinch of spaghetti western and a dash of laughable dialogue, and you have “Bounty Killer.” There is a whole lot to criticize about this movie—a ridiculous plot, some really cheesy special effects—but at the end of the day it’s actually a lot of fun.

Directed by Harry Saine and based on a graphic novel by Saine and Jason Dodson, “Bounty Killer” takes place in the future after a series of wars have ravaged the world. Big business has taken over and imposed their law and order on ordinary citizens. Most people seem to live out in the desert where they make celebrities out of bounty killers hired by some group The Council of Nine to hunt down and kill as many CEOs as they can.

The two bounty killers in the film are the Drifter (played by Matthew Marsden) and his onetime-lover and partner in killing Mary Death (played by Christian Pitre). But the Drifter has a dark past that turns up and ends up becoming one of the hunted. “Bounty Killer” also features Gary Busey and Beverly D’Angelo in bit parts, and Barak Hardley as the Drifter’s “Gun Caddy.”

Is your head spinning yet? I know, it doesn’t make any sense. “Bounty Killer” is trying to make some statement about business and CEOs being bad, but if you try to piece it together too much you’ll just fall down a rabbit hole. My advice: just ignore the filmmakers’ attempt at making “a statement” and just go along for the ride. Because as pure fluff, this movie works really well. The scenery and art direction were impressive, the movie looks great. And there is plenty of action to go around; considering the film’s low budget the action scenes aren’t all that bad although some of special effects and gore scenes come off looking cheap.

Finally, all the actors (even Busey and D’Angelo) all dive head-first into their roles. They know the story is insipid but they give their all. I thought Pitre in particular did an impressive job as Mary Death. Yeah, she’s easy on the eyes and looks good in spandex, but she gave her character a little bit of depth. The one actor who I didn’t think worked very well was Hardley who came off as shrill and unfunny. But I don’t know how much of that was due to him and how much was due to the writing.