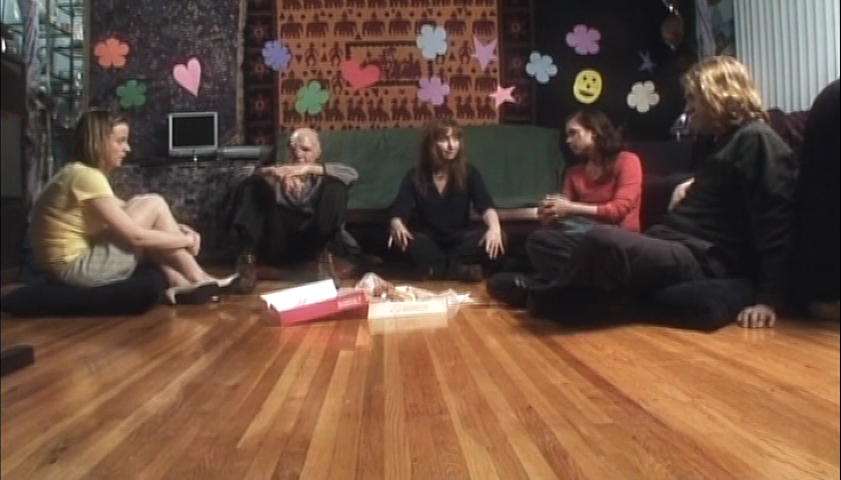 A scourge has descended upon our land. It began with a small number of isolated cases popping up, both in the US and abroad, which were often unpleasant but always manageable. At first it seemed like a problem easily dealt with and as a result, few took heed until it was too late. With unfathomable speed it spread exponentially until it covered the planet in an unstoppable cataclysm of evil. Today, my friends, we live in a world where bad zombie movies lurch en masse across the internet and hide in darkened corners of DVD shops, ready at any moment to shamble (or run, in some cases) upon us and slurp up our brains like warm lunchroom jello. The zombie apocalypse may or may not be televised, but it almost certainly go straight to DVD.

Sadly, “Zombies Anonymous” isn’t a self-help group for rock-stars-turned-directors who compulsively cast their talentless wives in every movie they make. No, “Zombies Anonymous” is just another shabby zombie movie, albeit one with a somewhat original premise. What differentiates this movie from the rest of the shuffling horde is that it takes place in a world in which the walking dead retain their intelligence and identities, working jobs and buying beauty products to cover up their decaying flesh. It doesn’t take much more than a partly intact brain stem to predict the clumsy, half-assed civil rights parable that inevitably ensues.

The movie opens with a girl being shot (and consequently turned zombie) by a jealous boyfriend, his only apparent motive being to give the story a dramatic start and an on-going plot thread. She adjusts to her new unlife, facing discrimination at the job and on the street until the pressure become so great that she seeks solace from a self-help group called (groan) “Hugs for the Mortally Challenged”. Zombies Anonymous provides a forum for the newly undead to share their difficulties over donuts which they immediately puke up because they can’t digest them. Dopey jokes like the donut gag and the self-help premise might make “Zombies Anonymous” sound like a comedy but surprisingly enough most of the movie is played with a straight face. What it actually most resembles in parts are the third-rate Tarantino knock-off crime movies that first-time directors flocked to in the mid-90s.

The crime aspect comes from the second plot thread, in which the murderous boyfriend joins up with a kind of anti-zombie hate group. As they cruise the streets looking for hapless zombies to assault and kill, the girl gets involved with an extremist zombie cult which is experimenting with eating (and sometimes mainlining) human flesh. As can be expected, the two groups eventually clash with much shotgunning of the heads and chomping of the guts.

The third act of the film in the DVD version I watched is virtually incomprehensible. At first I thought that I had missed something in my ever increasing boredom but a little online investigation revealed that the distributor made significant and seemingly random cuts to the film. It turns out the movie was originally released under the much less zom-com sounding name of “Last Rites of the Dead” and some key plot points were left on the cutting room floor including the transformation of one character that was so drastic that I didn't realize it was the same person until after I had finished the movie. Another character's death scene is cut so he completely disappears with no explanation. It’s a shame to see any movie butchered by a distributor like this, but the truth is that while the original cut would be much more coherent, the problems with this one go much deeper than a few missing scenes.

Where “Zombies Anonymous” really drops the ball is in teasing us with hints of a fully realized world in which some people stop living and become mixed-up zombies but then never delivering on that promise. There’s a lot of interesting material to be mined there but instead of exploring the implications of the premise we’re subjected to endless crappy-looking gun fights. One wasted opportunity comes when the anti-zombie militants harass a zombie who’s working as a waiter in a diner. The film clearly wants us to side with the poor, oppressed zombie and ignores the more interesting and ambiguous issue that there probably are some valid health concerns about having your scrambled eggs served up by a corpse. A little ambiguity and provocation would have gone a long way towards making the world of the movie a more fleshed out place.

I don’t think I could recommend “Zombies Anonymous” to any but the most die-hard zombie completists and even then it would be with some major reservations. While not all of the acting is bad, a few performances are distractingly terrible, even graded on the backyard microbudget curve. The movie can’t decide if it wants to be an action flick, a social satire or a gross-out gorefest so it shoots for all three and misses the mark in each case. To top it off, the chunks missing on the DVD release only serves to make an already poor movie practically unwatchable. Keeping all that in mind, if you are still interested in seeing “Zombies Anonymous” you might want to seek help. After all, the first step is admitting that you have a problem.