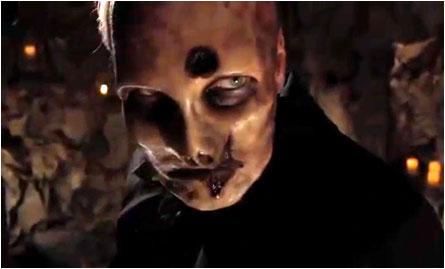 At one point for some reason one of the men gets so angry at one of the women, for biting him on the ear while they are having sex, that he pulls out a knife and stabs her to death. None of the other characters acknowledge whatsoever the fact that he murders one of the lovely ladies they were screwing. They don’t even so much as give him a sideways glance. Considering that this is a moment of such little consequence and the fact that the other girl at the orgy remains fully nude most of the remainder of the movie, I have to wonder if this girl was killed off just because there wasn’t enough money in the budget to pay two women to hang around naked while they were filming the rest of the movie.

One of the ghosts is played by Eric Roberts, of "Sharktopus" fame, who was probably longing for the days when he worked for a producer that would spend the extravagant amount of money on a movie that Roger Corman would. I wondered how he ended up in this movie and a quick glance at his IMDB shows he has literally over twenty movies in post-production or currently filming, so I’d guess he’s been running around, begging on his hands and knees to be in every movie that is currently being filmed on the planet.

Since the plots of ghost movies tend to be so paper-thin I think the most important thing for a good ghost movie is solid visual presentation. Unfortunately this movie looks about one rung better than a movie a bunch of kids could make with a digital camera. "The Dead Want Women" has the kernel of something that could have made a halfway decent B-movie, but they obviously didn’t have the budget to do anything interesting with it. I think for ultra low budget movie like this one you either need to go full on “camp” or just try to make a ridiculous or shocking exploitation movie. Unless you have a lot of talent I don’t think there is much you could do to make anything worth-while out of a project like this.

The director seems to try to make a serious movie, which I think is the fatal flaw that causes "The Dead Want Women" to end up being fairly awful and boring. The most exciting thing about this movie, and when I say exciting I mean literally the only interesting thing at all, is that one of the girls from the orgy pops up completely nude from time to time, and ends up standing around naked for almost the entire third act. When she wasn’t on screen I found myself just sitting there waiting for her to come back, instead of paying attention to what was happening.