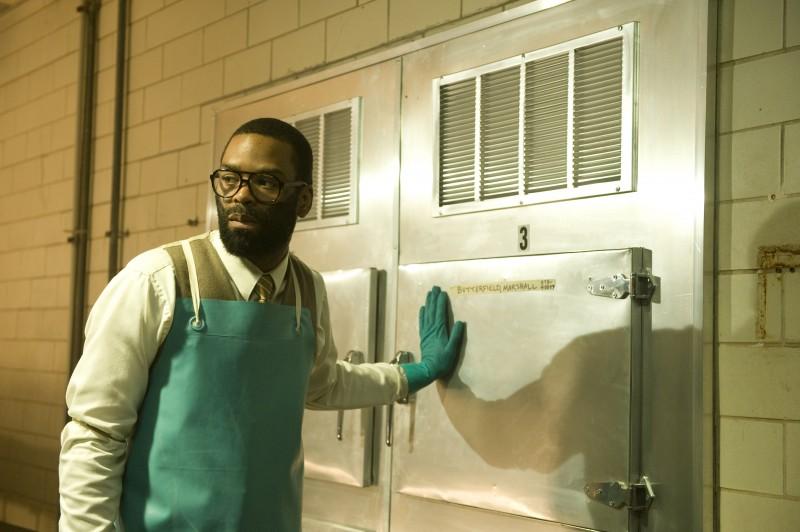 I don’t think anyone would call Method Man a versatile actor. If you look down his list of movie credits you’ve pretty much either got serious cool urban guy or funny cool urban guy. Not that that’s a bad thing. I’ve enjoyed most of his work and I’m fairly certain I’m one of ten people who saw “How High” in theaters opening weekend. The guys a good actor and he’s always fun to watch. But put him in a role where he’s monotone, stays cooped up in his house and pretty much tries to avoid human contact, will it work? The answer after watching “The Mortician”, and by no fault of Mr. Man, is unfortunately no.

In the film Method Man plays the sole mortician, he’s never actually given a name in the movie, at an inner city morgue. He lives alone, has a knack for taxidermy and is an all around a creepy guy. One night while walking home he witnesses a young boy watching a woman being dumped into a canal. Later on he finds the same boy hiding out in his morgue and while trying to keep him safe is also reminded of his own troubled upbringings.

Everything else that’s tossed into the movie really just becomes filler. The Majority of the film is spent developing the mortician character. Which isn’t a bad thing per say but when you have a 90 minute movie and 60 minutes of that is spend explaining one character you are left with a rushed storyline and a climax, or in the case of this movie two climaxes, that doesn’t really pay off. The boy, the couple taking care of him and the gang leader who’s hunting him down are never really developed. Because of that you never really have any attachment to any of them which is a major problem for the film since at least one of them you’re suppose to feel concern for. And when things finally come to a head and the mortician is confronted by the gang leader the outcome happens so quickly you’re left wondering if that was it. Unfortunately, it is.

It should probably be mentioned that Edward Furlong pops up in this movie as well for some reason in the role of Petrovski, the manager of the morgue. He randomly bursts into the room and makes some wise cracks and then disappears. There’s no real reason for him to be there and his character is pretty much a throw away. But I guess having the kid from “Terminator 2” is still valuable somewhere.

I’m not the least bit ashamed to admit I was really looking forward to seeing this film. Up until this point I’d never seen a movie with Method Man in it that I didn’t at least find somewhat enjoyable. But unfortunately for him he got tossed into poorly written film and a role that never really felt like he was able to develop into his own. My only hope is that the shortcomings of this movie don’t prevent a “How High” sequel from being created in the future.