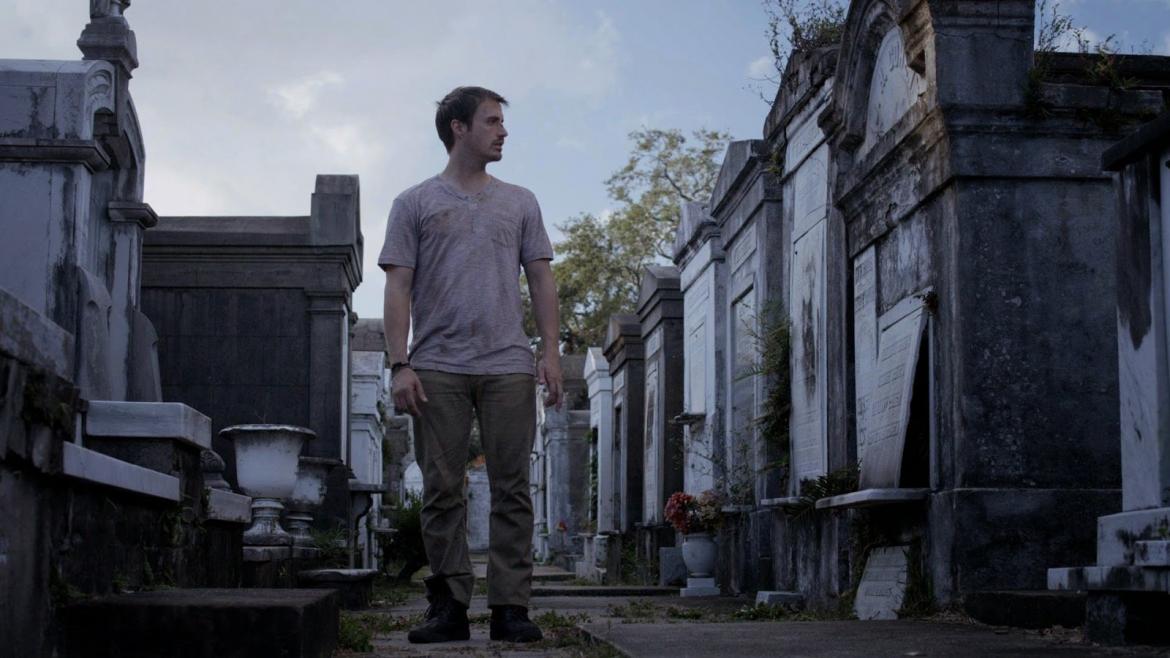 Car accidents are nothing new in horror films. They serve as a quick and (relatively) easy way to get a your audience to jump out of their seats and can be used as a plot device to create dramatic change quickly (though not always well), as in the opening of Jessabelle. What is less common, and perhaps unheard of up to this point, are car accidents caused by an alligator. Regrettably, that may be just about the only truly original idea that Monkey’s Paw has going for it. As the title might suggest, the story is an attempt at a modern retelling of the classic short story, in which a man acquires a shriveled monkey’s paw that grants wishes, only to have each wish sour.

The cold open features a young boy hiding in his room, while what sounds like a brutally violent domestic squabble takes place downstairs. When all goes quiet, he descends to find his father, inexplicably lying bloodied and dying on the floor, the titular paw clutched in his hand. He whispers a cryptic message about fate, and we cut to present day. Our protagonist, Jake (C.J. Thomason), works at a supply depot in New Orleans, with a group of poorly drawn and borderline offensive characters. There’s Crawfish, played by Corbin Bleu (Nurse 3D), with an unbelievably bad Cajun accent, Cobb (Stephen Lang), a perpetual drunk wearing a fleur de lis necklace, and Gillespie, named after the famous jazz musician. This crew could not be more absurd. After a rough day on the job, the guys head out to a bar and  we learn that the boy we saw in the beginning wasn’t Jake, but Gillespie, who is carrying the withered trinket with him. He tells them the paw was given to him by his father, but that it doesn’t work, and he passes it on to Jake.

As you’d expect, every wish that Jake makes seems to end poorly for him. The first ends up with Cobb dead and though the second brings him back, something is obviously wrong with him. Jake abandons the paw, ditching it in an abandoned warehouse, and from there, the movie becomes less about the monkey’s paw and more about Jake trying to protect everyone from a murderous Cobb with very murky motivations. There are a few decent kill scenes, but mostly there is just a lot of Stephen Lang wandering around spouting craziness as his hair grows increasingly insane.

On its face, this movie could have been a pretty cool idea. New Orleans is a city with a very distinct character, one that is often employed in films as shorthand for mayhem and debauchery. This could have been a great setting for a film about wishes, rife with situations that carry potential to teach the protagonist to be careful what they wish for. Jake, however, was neither stupid nor self-serving. He seemed only mildly interested in the paw and didn’t make any grand wishes for himself. In fact, Jake’s character didn’t seem to fit the movie at all. He seems like your average guy who is just working his job and trying to keep his head down, doing his best to get by. In the eyes of just about every other cast member, however, he is a “screwup”, a point that is hammered home with dialogue over and over but is never reflected in his actions.

Additionally, worse than simply wasting New Orleans, this movie threw in every trope in the book and painted the city in sad caricature. Not unlike the tacky drawings you can get at an amusement park, where the artist emphasizes and enlarges one or two cursory aspects, this film pulled out all the stops on superficial references, but did nothing that felt remotely genuine to the city. On top of the fleur de lis jewelry and the Gillespie name that I’ve already mentioned, the characters name check Abita beer over and over and a brass band can be heard playing “When The Saints Go Marching In” as Jake walks through the French Quarter. Any one of these references could have felt like a nice nod, had they been done alone, but on lumped together it felt like cheap attempts at creating sense of place with references gleaned from a five minute Gogle search.

With a runtime of only eighty-eight minutes, this movie still manages to drag to a point that neither C.J. Thomason’s charm nor Stephen Lang’s antics can sustain.