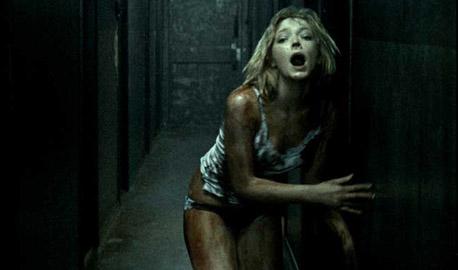 Roar Uthaug is familiar with the work of Alexandre Aja. I don’t know this for a fact but after watching “Cold Prey”, I’d lay my next paycheck on it. To be pointed, Uthaug’s 2006 Norwegian slasher is so stylistically similar to Aja’s “The Hills Have Eyes” remake that were it not for the little matter of snow vs. sand you might well think you were watching Aja’s mutant retread reset in Jotunheimen. "The Ice has Eyes", if you will. That both films were in production around the same time probably just means that "Cold Prey’ was more informed by “Haute Tension” than it was "The Hills Have Eyes".

“Cold Prey” opens with a quick back-story that involves a child gone missing in the mountains of Norway. From there the film tells a pretty straight tale about a group of 5 friends on a back country snowboarding trip. When one member of the group breaks his leg they are forced to take shelter in a derelict ski lodge. It’s soon revealed that the lodge is the same place where the boy went missing some 30 years prior. The lodge, non-coincidentally, also happens to be home to a marauding mountain man with a pickax. From there the film enters stalk and slash mode and works to a familiar endpoint.

The first act of “Cold Prey” looks like a car commercial and plays the ship of fools (vapid teens) formula to a teetering doze. It’s all excruciatingly familiar but thanks to some nice aerials shots and brisk cutting the second act reaches us in short order. Unfortunately, the second act moves with less fluidity than the first. Though it does manage to generate some tension along the way, it is not sufficient to offset the long minutes spent with pouty pillocks as they deal with trite dilemmas that remain largely unexplored until their death. What makes the characters issues even more annoying is that they are transparently manufactured to isolate one from another so that they can be killed off systematically. Truthfully, familiar as it is, this formula is actually tried and true; if the movie is…um, actually moving. In the case of “Cold Prey” however, we stay frozen in place until the 40 minute mark.

Okay, now the good news. The kill scenes themselves are pretty well done, if a tad light on gore. Aja at PG-13 might be the best way to describe it. The sonic jump scares wear thin before they start with one exception where Uthaug manages to synchronize all the elements for a very effective attack in the snow. Okay, that doesn’t sound overly positive, let me try again.

The third act is the strongest of the film and carries some genuine tension. The killer is kept faceless, has good costume design and the angles chosen for his appearances are very effective. What makes him even more effective is that the characters don’t seem to abandon all sense in order to allow the killer to pick them off. Instead their panic and confusion reads as genuine given the circumstance. And, if you can stomach seeing the formula without deviation, the final girl scenario does play to a reasonably satisfying conclusion. As a footnote, if you watch the alternate ending you quickly realize this modest satisfaction would’ve been murdered by the last cliché, (to go unused by the film) had the production not run out of money. All praise be to Njörðr.

This movie cannot be described as gratuitous; it has no nudity, little gore and breaks no new ground. Interestingly, that may be the reason it succeeds on some levels. One of my greatest complaints about Alexandre Aja is that his "a-ha" moments (sorry) are consistently weak. He shows us so much good stuff upfront that by the end we have to be bathed in blood or baited with an unsatisfying twist just to stay interested in the outcome. Uthaug doesn’t commit the sin of over acceleration, his is the opposite problem. The ultimate conundrum for the viewer is that "Cold Prey" exists somewhere between its two best options. As an audience we either need characters that are less wooden or we need them to be killed off much faster.

If I am blindly hopeful, I will seek out "Cold Prey 2" with the belief that Roar Uthaug addressed the overuse of horror standards, languid pacing, and feckless characterizations that plague this film. If on the other hand I was betting on it, I would wager that a return trip to the mountains with Roar would make for a nice 90 minute nap.

My Soul to Take