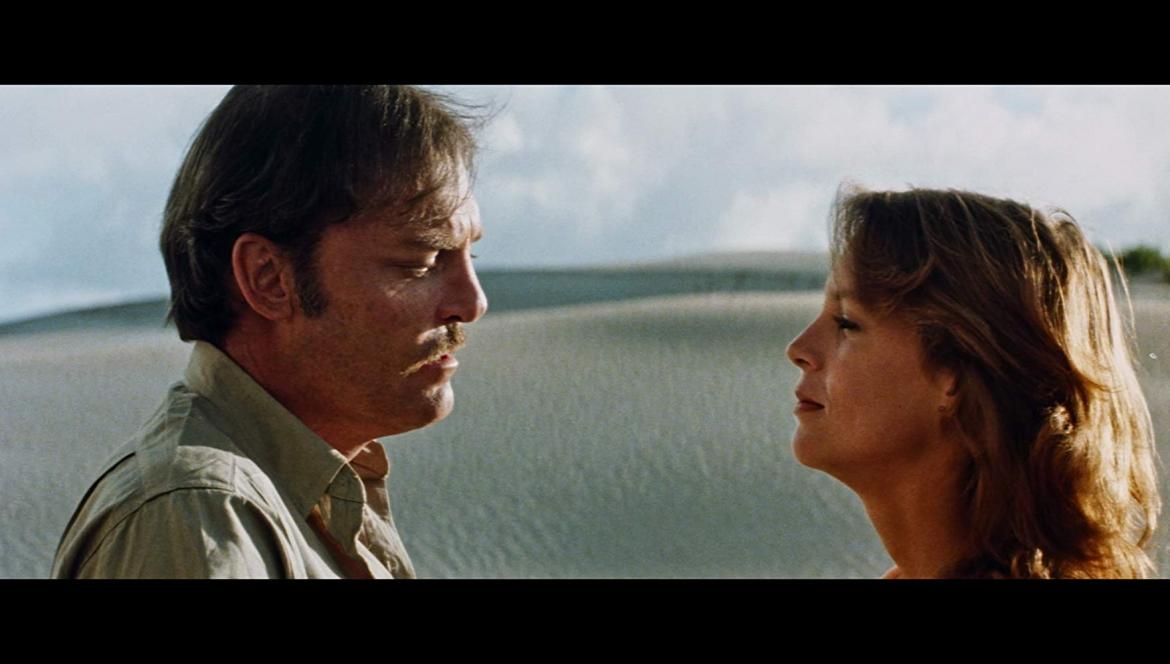 It's often said that the first few years of a new decade are basically just an extension of the last.  This tends to be true for fashion as well as cinema, if a film like 1981's Road Games is any indication.

Road Games stars Hollywood legend Stacy Keach as Pat Quid, an American truck driver plying his trade across the vast Australian desert. We find him hauling a truck full of pork in the middle of a butcher's strike, a bit of world building we're continually reminded of through delightfully dated news radio updates throughout the film.

Keach becomes distracted from his job when he begins to connect news reports of missing women with some strange occurrences that begin happening along his route. Before long, his singular obsession with tracking down the killer lands him straight in the middle of a deadly game of cat and mouse between the police who suspect he may be the killer and the actual man responsible for the murders.

You might look at the poster for this film and assume it's an 80's slasher. One has to assume it was marketed this way to capitalize on the rising star of a young Jamie Lee Curtis, seen here as a precocious hitchhiker Keach picks up along the way. Between this and 1982's The Fog, Hollywood sure loved to cast her opposite crusty middle aged men during this period. She sells her affection for Keach well enough, but it's probably a trope better left in the past.

Curtis' motives are not entirely clear, even less so after she's abducted by the killer and Keach begins to wonder if she left with the murderer willingly. We're meant to question at this point whether or not she's in on the whole plot, and this tension, along with some old school Hollywood car chases, are the fuel that drives the third act.

Here's what you will get if you check out Road Games; a 1980's film that feels rooted firmly in the 70's, tone that borders on the silly but still manages some moments of true suspense, and lots, (and I mean lots) of Keach hamming it up as he talks to his only friend in the world, a dingo he's adopted that rides along in the cab of his truck. You'll also see a film that only feels like a slasher for a few fleeting moments, but delights with several classic, lo-fi chase sequences of impressive scope. These are the kind of scenes you imagine had a lasting impact on many burgeoning action film directors. Ok, they're not quite that impressive, but if you've ever wanted to see an 18 wheeler absolutely DESTROY a boat being towed behind a car, this is the movie for you.

Road Games is just barely a horror film, but has enough genre tropes and on screen charisma to make it a worthwhile ride for 80's completists.