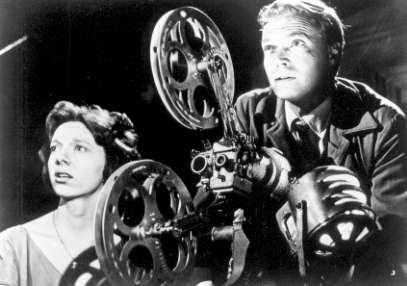 "Peeping Tom" is one of those films that's on the top 10 list of almost every horror director working today. It's also one of those films that I'd bet many of you have never seen before. Hell, I hadn't even heard about it until recently, so that tells you a lot. For it's time it was a groundbreaking film, and after seeing it I would venture to say that it still has the potential to be powerful even today.

Mark is a sad little fellow. As a child, his father (a biologist) had a sick obsession with fear, and Mark was his subject. Mark's father filmed his every move, and subjected him to cruel mental and emotional torture all in the name of 'science'. Needless to say, now that Mark's all grown up he's got more than a few issues. For starters he's obsessed with peeping. He also has an unnatural obsession with voyeurism, which explains why he became a photographer.

We learn shortly into the film that Mark is working on a documentary... a deadly documentary, which essentially consists of him killing women with a knife attached to his camera. You see, much like his father, Mark is obsessed with capturing fear on film, so that he may relive it in the privacy of his own home night after night. When he begins to fall in love with the pretty yet naive girl who lives downstairs, Mark's life becomes a bit more complicated.

It is the romance between Mark and Helen that provides the film's most interesting moments. Torn between his obsession with fear and his new-found love for Helen, Mark finds himself having to hold his murderous desires back at every corner. Never knowing real love, he also seems to have trouble allowing himself to experience anything in the first person, instead preferring the rather detached reality of his camera. Add to that one serious Madonna/Whore Complex and you have one sick puppy.

Since the film was made in 1960, the romance itself has a sort of sweet, timeless quality to it. Helen is the picture of virginity, and by the end of the film one can't help but root for this couple. Of course as mentioned earlier, they're obviously doomed from the start, but the power of it's ultimate failure is what makes the final shot so breathtaking... more on that later.

Admittedly, "Peeping Tom" is a dated film. As someone who has been treated to the twisted cinema of directors like Takashi Miike, Peter Jackson, or even Dario Argento... I found it hard to be really disturbed or even frightened by anything in the movie. The stalk sequences are the tamest of the tame, and there isn't so much as a visible drop of blood in the entire film. It's so tame in that regard in fact, that I almost passed out in shock when I actually saw a bare breast on screen for a second or two. In the absence of scares though, the real powerful thing about "Peeping Tom" is the pain that Mark is experiencing.

His father tortured him as a young boy, and even though he has turned into a homicidal maniac, I found myself sympathizing with him the entire way. Of course one also can't help but make parallels between Mark's own voyeuristic tendencies and those of ourselves as the audience. This was especially obvious to me during the scene at the end when Helen discovers what Mark has done... she turns on the projector and although we never see the horrors on screen, we can tell by the horror on her face what she has seen. In a strange way, we almost feel like she is discovering something we have done, which speaks to the quality of the filmmaking here.

For a while I wasn't quite sure to think of this film. The middle meanders on a bit, and nothing spectacular ever really happens throughout almost the entire running time. By the time the glorious finale had came and gone though, I realized that Peeping Tom really is something special. Something about that final shot, with Mark lying on the floor and Helen next to him, the film reel spinning wildly in the air, and the cops bursting through the door... something about that shot struck me as genius. It's not something I'm soon to forget. "Peeping Tom" is not for every one, but if you think you can appreciate a film from the 1960's that isn't Psycho and is at times a bit dated, I suggest you give it a try.