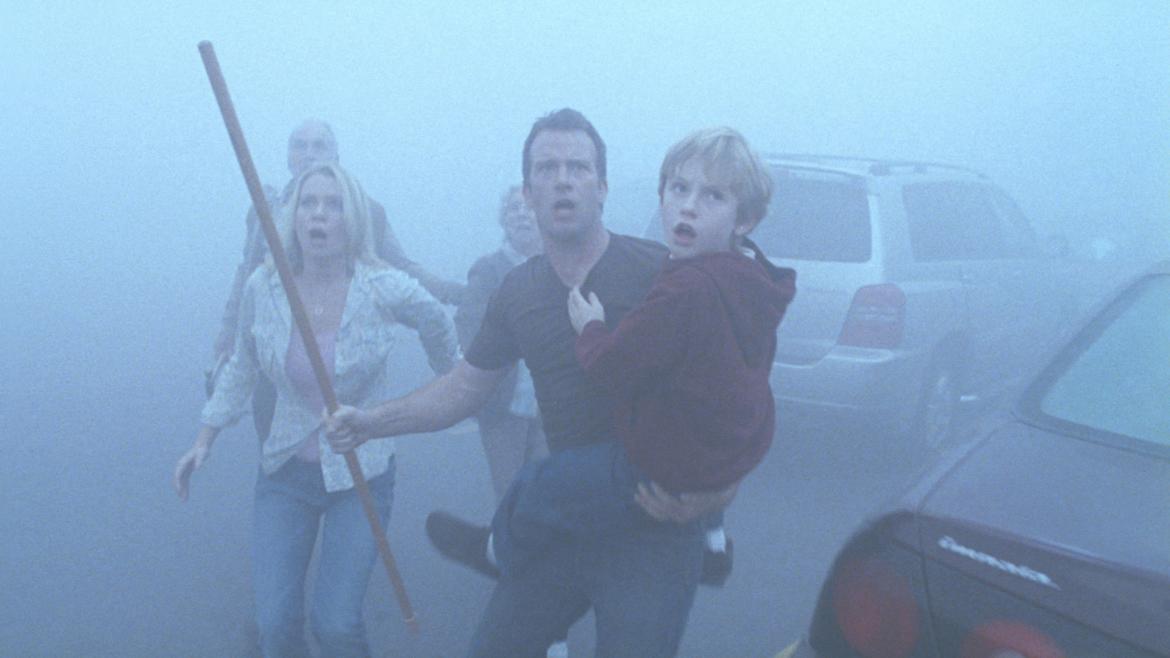 "The Mist" opens in a sleepy Maine town as a deadly storm is rolling in. Once it has passed, we see that the aftermath has left a pretty sizable hole in the house of our protagonist David (played by Thomas Jane). David then takes his child Jake and his neighbor Brent (played by Andre Braugher) into town for supplies, leaving his wife at home. As most of you have probably figured out by now, he doesn't ever come back.

This is because while he's in the store picking up supplies something very ominous happens. A thick fog or "mist" (couldn't call it "fog" for obvious reasons) descends from the mountains and envelops everything in the town. When a bloody man runs into the store screaming of dangerous things in the mist, a rather large group of townsfolk suddenly find themselves face to face with questions of their own mortality and relationship with God.

And so goes the setup of Stephen King's "The Mist," a film adapted for the screen and directed by Frank Darabont, who is probably most well known for the incredible job he did adapting King's "The Shawshank Redemption" for the big screen in the 1990's. This is a perplexing film to say the least. Once everyone is trapped inside of the grocery store the real stars of the film emerge... the interpersonal relationships.

As with most King novels, the story really focuses on these relationships and how dangerous humans can be when backed into a corner. Although not right away, by about half way through the film the group starts to divide into two separate but distinct camps... those who believe they must do anything to stay alive, and those who think judgment day has arrived and there's nothing that can be done.

I can only really describe my experience with this film by saying this, "it won me over." It had me going in the beginning with it's brisk set up and likable characters (Jane impressed me a lot), but when it came time for the first monster attack scene I thought all hope was lost. To say the CGI in this initial introduction to the monsters was piss poor would be a major understatement. Fortunately though, as the film progressed the creatures became more believable and the CGI improved a hundred fold.

I was intrigued by the questions raised. Was this a biblical plague? Was it just a case of science gone too far? One could even argue that neither of those are mutually exclusive. Either way, there are some fascinating questions raised and they're all a direct result of one character, Mrs. Carmody (played by Marcia Gay Harden). She's played up as a religious nut in the beginning of the film, but as things worsen some of the people in the store slowly begin to convert to her side.

In fact, my only complaint about this plot-line is that it doesn't really go anywhere. Darabont goes to great lengths during one of the action scenes to suggest that her piety has kept her protected from the monsters, and I thought for sure that would come up again later. I won't spoil why, but let's just say that those questions never really get answered.

Which isn't too much of a tragedy, because "The Mist" still has a handful of breathtaking moments that I can't wait to see again. Unfortunately I can't get into too great of detail on the monsters, as I feel experiencing them fresh is really the way to go, but some of the later incarnations of these creatures are fantastic.

Perhaps learning a lesson from the early CGI scenes, the bigger monsters (giant colossus type creatures) are done in a very clever way. We see them, but we don't. They're back far enough in the mist to be obscured by it, but yet we still feel satisfied as if we have been given a money shot. There is a shot towards the end of the film with a giant creature walking across a highway that still gives me goosebumps just thinking about it.

And oh what an ending it is. The story finally builds to a head and a small group of our heroes decide to take their chances by finding out what's on the other side of the abyss. Without spoiling too much, it doesn't end well. By the time this ending had rolled around I was completely sold on the experience. After talking to a few of my friends over the last few days I'm not sure they were able to get themselves back into the story after the shaky set-up. Personally however, I think that if you can have patience in the early going than you can definitely have a fulfilling experience by the time it's all over.

And "patience" is the perfect descriptor here because "The Mist" is a great movie with just a handful of frustrating aspects keeping it from being perfect. A few storylines that aren't tied up, a few questionable CGI shots and a back-story that is largely ignored (save for one line) are really my only complaints. Other than that I was sold on this whole experience through and through, and I can't wait to take another dip on DVD.