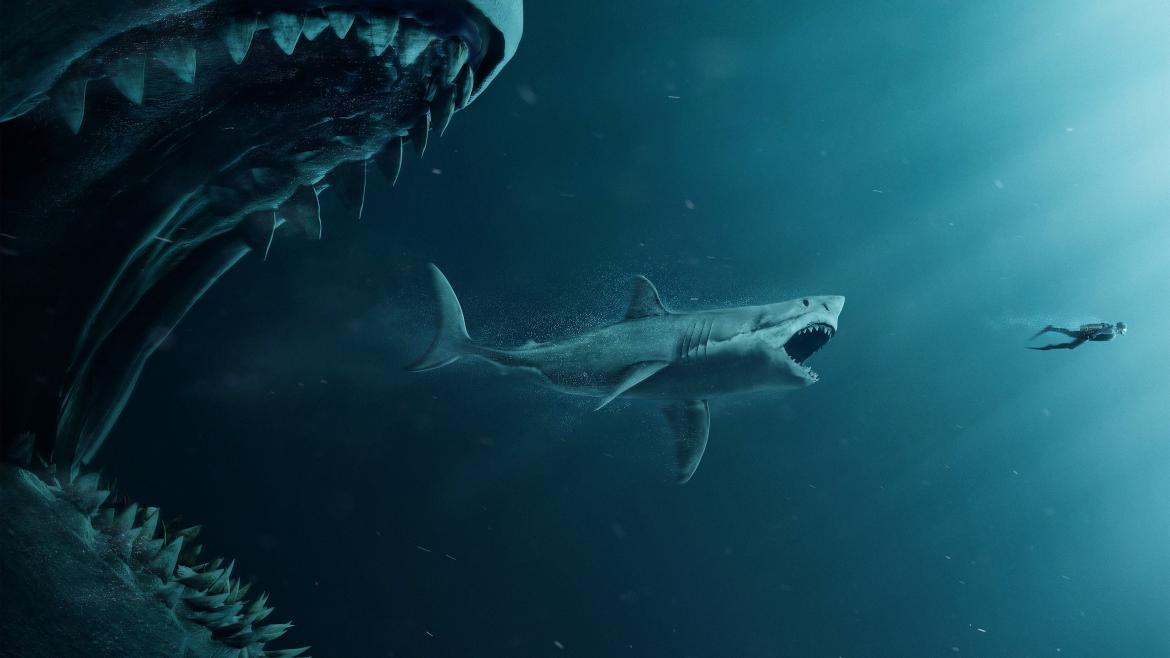 Summer has become a chomping ground for a shark movie resurgence. Ushered in mostly by The Shallows, followed a year later by 47 Meters Down, and now 2018 brings us The Meg; an adaptation of Steve Alten's series of novels that might as well have been dubbed "Jaws for Dummies." However, nearly two hours of giant shark shenanigans pales in comparison to the film's true wonder of nature...a smiling Jason Statham. With director John Turteltaub at the helm, The Meg could have easily just turned into a film that unabashedly says "get ready to turn your brain off and enjoy the ride," (it probably would have been better off going that direction) but Turtletaub tries a little too hard to sell the science of what you're about to see.

Statham stars as Jonas, the man people call in when they need a daring deep-sea rescue. The film begins as he's doing his thing and in the process two of his crew are killed when he makes a quick decision to leave them behind as they are being attacked by a large unseen creature. Years later an uber expensive research facility, funded by Morris (Rainn Wilson), has sent a research vessel to the same depths in order to discover an unexplored chasm of unclassified sea life. When they are attacked by the same creature, a megalodon, the team calls in Jonas to come pull them out of danger. In the process the massive shark finds its way out of the area it had been confined through a scientific anomaly and it's up to Jonas and the rest of the facility's crew to track it down and kill it before it reaches the shore.

As someone who has never read the books, it's hard to say if the film follows the science of the book, but what The Meg does offer is "movie science." It's not inherently interesting or detailed enough to launch think-pieces debating its accuracy, but just enough to essentially shrug and say "sure, I can buy that if it gets me some giant shark carnage." Even then the carnage one would crave from a dumb giant shark blockbuster is not there because of that one key word...blockbuster. The Meg was made to appeal to the broadest audience possible and what the masses crave is crowd pleasing thrills, not mindless or mean-spirited gore. That'll be saved for the Unrated Director's Cut, which let's face it, still probably won't satiate most genre addicts.

Now, there's nothing inherently wrong with The Meg being dumb and there's nothing wrong with it being dulled down in terms of violence, though you still get a lot of animal on animal savagery. Turteltaub still delivers an enjoyable "creature feature" ride that just isn't as mentally stimulating as you might have hoped for. Your typical genre blockbuster tends to lean that way. The hook for this film is its husky predator and you get plenty of it doing its thing, though it could have certainly done more as the film's biggest failing is missed potential for B-movie carnage, particularly in the brief beach scene which would have been a giant shark's equivalent to a Golden Corrall.

The Meg had the potential to be the giant shark counterpart to Alexander Aja's Piranha 3D but opted out for something that mainstream audiences could conceivably bring their kids to. Statham is Statham as always, but with an extra layer of charm as he interacts with the film's 8-year old star Shuya Sophia Cai, who plays Meiying, and there's actually quite a bit of chemistry between Statham and Bingbing Li, who plays Meiying's mother. Even still romantic subplots aren't really what summer audiences are typically paying for. Our aquatic antagonist has plenty of moments to wreak havoc on-screen and there are a handful of well conceived set pieces, the indestructible shark cage being the most effective. Yet it often feels like Turteltaub is pulling back from having as much fun with the premise as he can.

Look, there's plenty of reasons to hate The Meg, but if you're having a good day it's also hard to condemn it to a significant degree. Additionally, it seems unreasonable to expect that a giant shark movie would be anything other than what The Meg is: dumb harmless fun that skates by with the bare minimum of thoughtful plotting. Where Jaws is the undefeated meticulous and lightning fast champion, The Meg is the slow hit or miss bruiser that runs out of breath after a few swings.

Empire of the Ants