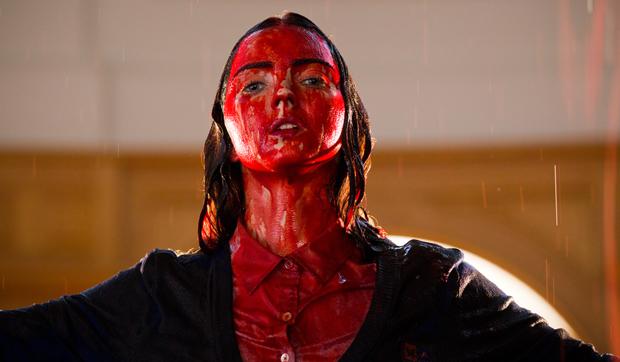 Latent sexuality and vampires are two very symbiotic tropes in horror films, especially teenage ones. Luckily in the capable hands of an experienced director, even ‘starter horror’ can be well executed and intriguing.  Fortunately, The Moth Diaries, is a film that is able to elegantly straddle that line, especially in the hands of director and screenplay writer, Mary Harron (American Psycho.)

Upon returning to an exclusive boarding school, sixteen year old Rebecca (Sarah Bolger, The Lazarus Effect) decides the best way to settle her emotions from the recent suicide of her poet father is to record her thoughts in a journal. Along with the extremely close friendship of a few classmates, and her best friend Lucie (Sarah Gadon, Dracula Untold), Rebecca is soon feeling healed and normal. However, soon after the semester starts, a mysterious girl named Ernessa (Lily Cole, Snow White and the Huntsman) rooms across the hall from Rebecca and Lucie– turning their world upside down. As Lucy and Ernessa become closer, both emotionally and eventually physically, Rebecca is pushed further away from her best friend. Driven by her desire to save her friendship as well her adulation for Lucy, Rebecca sets out to expose Ernessa’s dark secrets. As the death count rises at the school and Lucy’s health continues to rapidly decline, Rebecca learns that vampirism isn’t just something in gothic romantic literature.

Gracefully weaving the fear of female sexuality that is present in the Dracula vampire lore with elements of Joseph Sheridan Le Fanu’s early vampire novella, Camilla – The Moth Diaries plays out dramatically within the soap opera lives of boarding school girls. Though a bit sophomoric and tedious with the naivety of schoolgirls, The Moth Diaries still delivers the chills with a more paranormal and original take on the vampire tale. Though there is no modern blood sucking fangs, the raw sexual tension and spiritual connection between the teens is both palpable and draining.  Cole, Bolger and Gadon all deliver solid and believable performances as naïve and wide-eyed teens – oblivious to the ways of the world outside their schoolhouse bubble.  Though we are given sex, blood and paranormal symbols of vampirism – the real draw of the film is a sophisicated and gothic adaption of the vampire tale, ripe as always with symbolism.