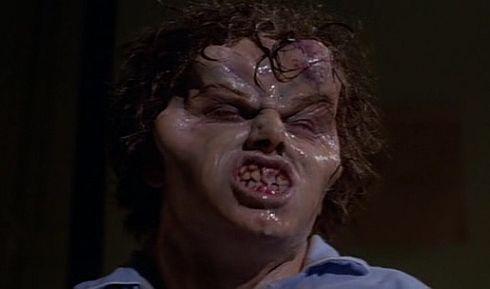 This is a review of 1982’s “The Beast Within” not 2008’s “Beast Within” aka “Virus Undead”. The latter is a killer bird movie, the former is a bit harder to peg. The first thing to know about “The Beast Within” is that it is spilling over with “Oh yeah, that guy” character actors. At the forefront is Ronny Cox who is probably best known as the police chief who acts as Axel Foley’s foil in “Beverly Hills Cop” or perhaps you’ll even recognize him as one half (the full chromosome half) of the Dueling Banjos in that famous scene from “Deliverance”.

In this film Cox plays Eli McCleary, husband to Caroline McCleary, the newly weds are traversing rural Mississippi when their car gets stuck in the mud. Eli goes for help on foot and Caroline goes looking for their dog that has run-off into the woods. She is subsequently raped by an Ogre-ish brute. Caroline survives the attack, has the child, and she and Eli raise the boy they name Michael as their own for 17 years. When we next meet the McCleary’s they are receiving dire news regarding a recent condition that has befallen their son. Michael’s condition is a mystery to the doctors and a frustrated Eli decides that in order to unlock the mystery of the boy’s malady he and Caroline must take their son back to the rural town near where he was violently conceived, in search of the boy’s bio-dad.

Unsurprsingly, the not-so-good folks of that tiny Mississippi town are none too eager to cooperate with the McCleary’s in their search for answers. A conspiracy of silence surrounds a local family named the Curwin’s and their involvement with a man named Bill Connor who may be the rapist/father. As this circle of silence works to keep Michael’s parents’ in the dark about his heritage, the teen slips from his sick bed and chows down on the neck of the local newspaper editor, who is not coincidentally a Curwin himself. More Curwin’s fall prey to Michael’s bloodlust and his metamorphosis into the vile man-beast that helped to create him reaches a climax as his parents rush to unravel the secrets and discover a cure.

This is the best movie ever to combine H.P. Lovecraft’s “The Case of Charles Dexter Ward” with William Burroughs’ “Naked Lunch” and structure it like the life cycle of a Cicada. Sounds pretty interesting, huh? It is, but only sporadically. The movie is a pendulous affair that spends equal time in the realm of uproariously silly fun and scraping boredom. The amusing aspects are based around the vaguely advanced notion that Michael’s affliction is actually transforming him into a Cicada-man. Equally amusing is that this family trait has its genesis in bio-dad’s prolonged stay in a cellar where he was forced to eat exhumed human remains. These preposterous plot points really add to the fun as does the rampant bumpkinism that informs the film’s characters, the dated dialog (“Houston? The Astrodome! 8th wonder of the world.”) and the occasionally goofy “Basket-Case” styled creature effects.

The boredom comes in the form of a plot that hatches slower than a nymphal cicada takes to reach its molting stage. There is a fair amount of mystery to keep the viewer invested, but the creature’s appearance is held back for far too long. Normally, I love a good game of hide-the-monster but here there isn’t enough menace to sustain the tension for two acts without a the fiend’s appearance. Perhaps the element of this film that most undermines its effectiveness and is the score. Reportedly composer Les Baxter told many that this was his best work. I hope for his sake that he is a poor judge of his own work. The music is inappropriately grandiose and creates a drippy melodrama where a more understated, mannered musical choice might have brought some real creep factor to the movie.

Overall, you could do a lot worse than “The Beast Within” if you are looking for a gory creature flick with a big finish. If you go into knowing that it fails as a consistently entertaining monster movie you will probably be able to pull some good chuckles out of the experience.